In addition to his unforgettable fights, Ultimate Fighting Championship (UFC) and mixed martial arts (MMA) pioneer Don Frye has also had his share of unforgettable media appearances throughout his career. In fact, there may be too many to count over the last decade.

But that doesn't mean we shouldn't try.

To pay tribute to the hilarity of recent Fryisms, our friends at Round 5 -- the high end retailer responsible for combat sports' most recognizable collectible figurines and merchandise -- recently ran a contest on MMAmania.com, asking our faithful readers to share their favorite and/or wildest Don Frye anecdote, quote, video, memory or story, including the impact it's had (if any) on the history, progression and/or forum thread humor of MMA.

We received several gut-busting submissions, none of which disappointed, and today we are pleased to announce the grand prize winner, "JNSJAY."

Check out a sample of his winning entry after the jump: 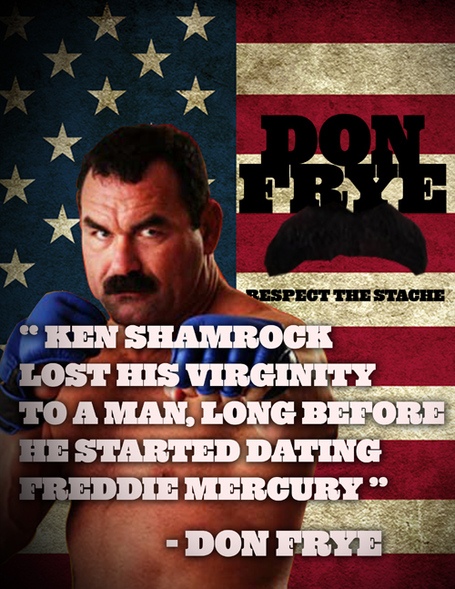 See the rest of his entry here.

What's he taking home? None other than the entire "Ultimate Collector" Series 9, which is anchored by the UFC and PRIDE legend, commemorating his championship run through the David and Goliath Tournament staged at UFC VIII.

Series 9 also includes the meanest mug in the game, Nick Diaz, along with the homie he ain't scared of, Jason "Mayhem" Miller. Rounding out the collection is hard-hitting middleweight Chris Leben and UFC Lightweight Champion Ben Henderson.

Thanks again for everyone who took the time to participate. We'll certainly partner up with Round 5 again down the road and giveaway more free goodies.

To see more from Round 5 including their incredible line-up of figurines and collectibles click here.