The second Super Fight League show was an improvement on the first, the cameras did not constantly pan away from the action to show which celebrities were in attendance and there were three decent level fights to keep the international audience happy. The production was good and, unlike the inaugural event, the fights themselves were all satisfactory.

At a glance it appeared that the SFL was moving in the right direction and a couple of the Indian fighters on display, Anup Kumar and Ranjeet Sahni, at least looked competent and potentially capable of one day competing at a higher level.

There were a lot of empty seats and reportedly less than 1,000 people showed up to the 5,000 capacity stadium but attempting to host major MMA events in places which have no history with the sport was always ambitious and according to sources in India there were only around 300 paying customers at the first show. Had the SFL chosen sensible sized venues, with capacities closer to 800, they could conceivably have filled them and saved us the sight of deserted stands.

The most worrying statistic was in the bottom right hand corner of the screen where the viewer count told a story which casts doubt on not just the future of the SFL, but the state of the entire sport of MMA in India. Over 300,000 people watched the first show, an extraordinary figure and, given that this is roughly double what the UFC gets for its free undercards, it is safe to assume that the vast majority of these viewers were in India.

SFL 2 got just 3,000 viewers on youtube, which represents an almost unbelievable 99% decrease from the first show and neither event was shown live on TV in India so it's not possible that figures could have been affected by a simultaneous broadcast elsewhere.

It is a staggering statistic and one which I really struggled to understand, particularly given that the second card was to my mind much stronger. I enlisted the help of Andrew Lu, a magazine editor and long term MMA fan from Delhi, to try and help me get to the bottom of it.

He thinks that although the first SFL show succeeded in getting Indian viewers to tune in it failed to impress most of them,

"The first show got a ton of India viewers, but it didn't hold their attention for to long because they thought it was going to be like the WWE, a lot of the Bollywood stars even said that they thought it was pro wrestling. A lot of people were really disappointed at what they saw, I think it was a matter of hype and style over substance." 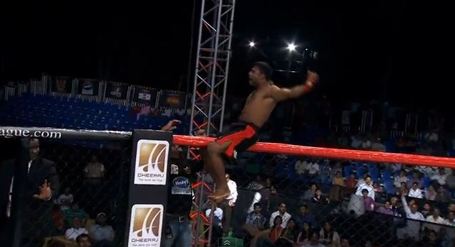 The connection between Bollywood and MMA has been a key part of the SFL's promotion and the idea was that the association with celebrities and the film and music industry would help to pull in viewers. However Lu feels it has not exactly worked out as planned,

"I think using Bollywood to promote MMA was a really bad idea. The media spoke to the Bollywood stars present at SFL 1 and 90% of them said that the sport should be banned and that it was fake and setting a bad example for their children."

He is however delighted that the UFC is finally going to be broadcast on TV in India and is also relishing the prospect of live shows and a possible TUF series,

"I am beyond excited that the UFC is finally making its inroads to the Indian sub continent. The UFC is a quality product. They aired the first season of the Ultimate Fighter on TV here in 2005 but with no media push the hype quickly died down. With the UFC getting serious about global expansion this time I think they'll spend good money on introducing the sport to the country through media coverage, billboards, radio etc. I'm pretty sure they are going to go all out on that. They seem like they really want to capture this market because of the sheer numbers."

The UFC has been talking about India for a long time while ONE FC is a step ahead in that it already has an active broadcast deal with ESPN Star Sports. Both promotions will probably be putting on live events in either Delhi or Mumbai before too long but Lu does not believe that the Indian market is quite as ripe for MMA as certain people seem to believe,

"Awareness of MMA is not high, the sport needs to be introduced here first. No one even knows what it is and the UFC should let the TV deal ride out into maybe the first three years, then gauge the ratings and popularity of the sport. Once MMA has been accepted here and can be seen as a viable source of income and they have a decent Indian fighter that they can promote as well as some sort of TUF here, then maybe they can hold their first live event here which I'm 100% sure they will." 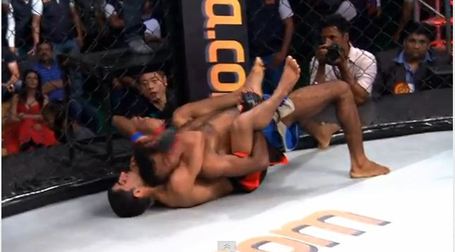 The UFC are probably working to a tighter timescale than that but history has shown they are happy to bide their time before making moves into new territories. A show in the Philippines has supposedly been imminent for several years but doesn't appear to be any closer to materializing and it is clear that Dana White and co will not risk entering a market until they are convinced it is ready.

The SFL is in danger of serving as a cautionary tale of what can happen to promoters who are impatient and don't attempt to build from the bottom up. Internationally it has been well received and fight fans are intrigued by the concept of Indian MMA but back home the reception has been much more muted as Indians react with bemusement.

At this point it seems doubtful that the SFL will ever grow to the point where it can fill the sort of outdoor stadiums which it has set out to host events in. The owners appear to have let their ambition get the better of them by attempting to hold such large scale shows right from the start and the T Box Mobile Arena was supposedly only around 20% full for SFL 2.

Whatever the future for the SFL it is at least raising the profile of the sport in India, albeit not quite at the intended speed. The UFC didn't start to really succeed financially until 2005, 12 years after it was first formed, and even though the SFL is struggling the outlook for MMA in India is not necessarily bleak.

Comparisons between countries can be disingenuous but it is doubtful if ONE FC would have been able to sell 7,000 tickets to a live event in Singapore if Martial Combat hadn't already paved the way by putting on 12 small scale shows in 2010.

Perhaps MMA in India will enjoy a similar curve of success and interest will gradually increase even if the SFL doesn't stand the test of time. The plus side for the promotion is that the owners have deep pockets but there is probably a limit to how long they will be willing to sink money into a company which isn't making a profit.

It seems that very few of the billion plus people in India are sold on the SFL and even Lu, a long term MMA fan, remains unconvinced,

"It's clear that SFL has money but I think they lack the know how and the intricacies of running a large scale MMA promotion like the UFC. As a fan, the fights are slightly disappointing, the fighters here have yet to fully develop their skills and it shows. The grappling was sloppy and there was no technique to the striking exchanges. There is a huge gap when you see the pros go at it and the fighters from India and Sri Lanka go at it."