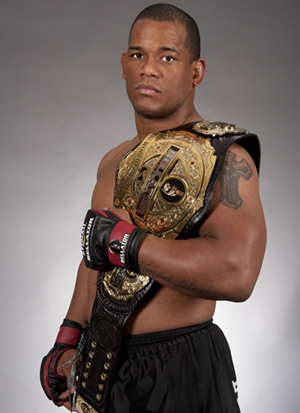 The newest member of the UFC's middleweight division is a name we all recognize.

Former Bellator middleweight champion Hector Lombard, riding a 5 year undefeated streak, has finally signed on the dotted line to fight for the UFC. Winning 19 consecutive fights since his failed attempt to garner a visa for UFC 78, the American Top Team fighter not only adds some much needed depth to this UFC division, but finally will put to rest all of our questions of where he actually stands in relation to his peers at the top of the division, all of whom are currently fighting for the UFC.

While much speculation has already been made on who he should fight and why, I prefer to take a closer look at what Lombard brings to the table and his chances of being successful against the top of the UFC's 185 pound division. Hector Lombard is under the microscope.

The Cuban-born Lombard, a former Judo Olympian, holds a 4th dan black-belt in judo and was awarded his black belt in Brazilian jiu jitsu in 2010 by Marcus Silviera (Carlson Gracie Sr.). Fighting out of Boca Raton, Florida, Lombard stands 5'9", has a 73 inch reach and is currently ranked #11 in the consensus rankings. Considered short for the division, Lombard has found a way to close the distance against some notable fighters (Kyle Noke, James TeHuna, Alexander Schlemenko, etc), but Lombard has yet to beat anyone who has approached the top 10 in the division. Since losing to Gegard Mousasi ages ago, Lombard has beaten the best fighters available to fight him, but are his previous fights enough to believe that he will continue in his winning ways?

How does Lomard stack up against the rest of the division when looking at his ability to affect the scoring criteria set forth by the unified rules? How does Lombard get the job done?

The least questioned of Lombard's abilities, grappling is where Lombard thrives. Even though he has not recently submitted many of his foes (only one non-punches submission win since 2007), Lombard's background in Judo, and his stature (or lack thereof) combine to give him a great base. Although not tested by top tier wrestlers, Lombard had no problems with Trevor Prangley, a very respected wrestler, and good baromteter to judge that Lombard has at least above average take down defense (TDD). Until he fights the top of the food chain wrestlers like Sonnen, Munoz and Weidman, we can only guess that his skill here is sufficient.

We all know about Lombard's judo throws, but his top game is also very underrated. Working in Schlemenko's closed guard, Lombard was still able to connect with solid ground and pound.

Lombard also finished his fight in 2011 against Jesse Taylor by way of heel hook. Not a great notch on his belt, but Taylor has very good wrestling and has recently only lost to top fighters. While I want to think that Lombard is a top of the food chain grappler, until he beats a top of the food chain grappler I can only give him the following score.

Lombard has power. Lots and lots of power.

Whether initiating the striking or counter striking, Lombard has the tools to put any fighter to sleep. 6 of the last 8 guys he beat was due to strikes. Notice the hip movement in both KO gif's. Lombard generates his power from well below his center of gravity and has power in both hands.

Lombard does not have very tight striking defense though. He carries his hands too low (which helps him generate power when he does strike) which leaves him open to strikes. He also has a tendency to back stright up when being attacked. Considering he will have a reach disadvantage with every good striker in the UFC's middleweight division, both of these tendencies need to be worked on for Lombard to be successful against the best in the world.

Lombard is an aggressive fighter with explosive power. These two traits have made him a fan favorite outside the UFC and should continue to add to his list of fans once he fights in the UFC. Lombard rarely backs up, and when he does it is to unleash a counterattack or trip that puts him back in the driver's seat. Lombard's aggression is his best trait, which I hope he doesn't lose once across the octagon from an elite wrestler.

Lombard's ability to control where the fight takes place is the mark of an elite fighter. Very rarely on the defensive. Almost never on his back (has he been? I honestly can't remember it) If his ability to dictate where and when he engages continues in the Octagon, Lombard will justify his UFC signing and will be in a title match with the winner of Chael Sonnen/Anderson Silva after a warm up fight. Lombard's Judo base has proven to be good enough to keep it standing against good wreslers (Prangley), and his wrestling base has been good enough to put good strikers on their back (Schlemenko). The only question here is from his cardio. Lombard does not have a great gas tank. Can he continue to exert his gameplan on his opponent once he gets tired at the highest level?

Hector Lombard seems to have all the tools required to make a deep run at the UFC middleweight title, but there are more than a few questions based upon some observations and his history.

Gegard Mousasi used his reach to thoroughly outstrike Lombard in a very one-sided fight, but the was 5 years ago.

Lombard has never fought an elite wrestler, and his TDD will always be questioned until he fights a Munoz or a Sonnen.

Will cardio be a factor, especially against guys who like to make fights ugly?

All in all, the signing of Hector Lombard is a coup for the UFC. They get the best 185 pound fighter in the world not under their roster, strengthen a division that has a dominant champion (and few legitimate contenders), and they collect all the dividends Belltor spent on building Lombard into a marquee member of its roster.

Personally, I don't care who Lombard fights first, I will just be happy to put to rest all the questions of where he stands in the division.