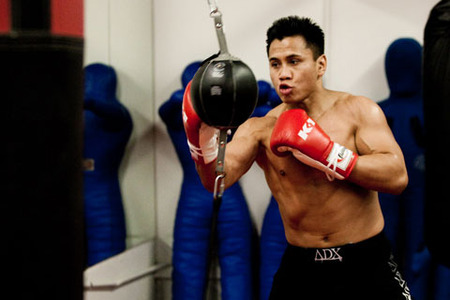 There are a number of Vietnamese fighters competing at an elite level of mixed martial arts (MMA) with former Strikeforce Middleweight Champion Cung Le the most notable, although Nam Phan is also on the Ultimate Fighting Championship (UFC) roster and Bao Quach and Tyson Nam have enjoyed success with some mid-tier organizations.

All of these fighters were either born in the United States or, like Le, moved there at a very early age and have represented their adopted countries throughout their career.

There has yet to be a homegrown Vietnamese fighter but in Hanoi, one man is working hard to change that.

Long Van Nguyen is the owner of Vietfighter, which is home to a number of ex pats as well as locals who all train together in Brazilian Jiu-Jitsu (BJJ), Muay Thai, boxing and, of course, MMA.

Find out after the break why he believes that the sport is just starting to catch on in Vietnam and has a lot of potential to grow.

Are there many MMA camps or people training MMA in Vietnam?

As of right now there are only a handfull of MMA gyms in Vietnam, however most of them popped up just over the course of last year. Just like everywhere else in Asia new MMA gyms are popping up more and more. The actual number of Vietnamese training MMA is low, however I do see more and more people training MMA and wanting to train MMA everyday. Hopefully as MMA become more popular, more experienced MMA trainers will come to Vietnam to constantly improve the level of MMA training in Vietnam.

There are quite a few Vietnames, or second generation Vietnamese fighters doing well in the US such as Cung Le and Nam Phan, do they get any recognition in Vietnam?

Cung Le and Nam Phan are only known within the hardcore fight sport and MMA fan community in Vietnam. But it is very hard to be well known as an athlete in Vietnam unless you are a famous soccer player anyway. Within the hardcore MMA fan base in Vietnam, these guys especially Nam Phan do provide some inspirations as they show that Vietnamese can be good MMA fighters and reach the highest level like the UFC.

How many people train at your school and what sort of backgrounds do they typically come from?

At Vietfighter gym right now we have about 40 who train regularly and more who come occasionally. Our members come from all over the world, including USA, Canada, Australia, Portugal, France, Germany, Holland, Japan and of course there are many Vietnamese. Every training session at Vietfighter gym is a bit like a United Nation conference hahaha. We have people who are local students and local professional people, foreign English teachers, foreign professionals and diplomats as we are in the capital city of Vietnam.

How often do you train together?

As MMA is very new to Vietnam, most of our members are complete beginners so we really do concentrate on training the fundamentals of MMA such as striking (Muay Thai and boxing) and wrestling and Brazilian Jiu Jitsu. So we spend most of our times training these fundamental bases. So we train striking six days a week and BJJ/grappling three times a week, and of course doing conditioning trainings about three times a week. Once some one is good enough at these fundamentals we move them onto the MMA class. 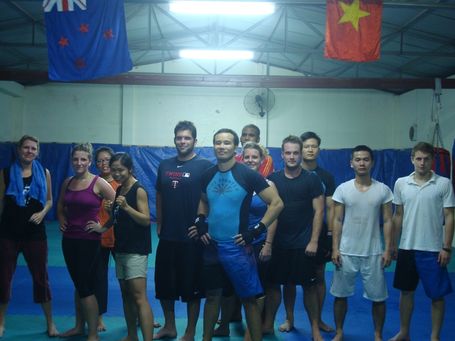 Do you have any fighters ready for MMA competition?

At Vietfighter Gym right now we have 2 guys that could fight MMA, they were about to fight in the NAKSU MMA promotion in Thailand last year, but their fights were cancelled because of the floods. We did have Jake Butler who was an American NCAA division 1 wrestler who begun training MMA with us last year and is now contracted with ONE FC and will make his professional MMA debut for ONE FC soon.

What other martial arts are popular in Vietnam?

Vietnam does have its own native martial arts like Vovinam. They are quite popular . The martial arts that are in the Olympic or are in international competitions like the ASEAN games like Taekwondo, Judo, Karate, Wushu Pencak Silat and western boxing are quite well known as they are promoted and publicized by the government.

I see your fighters have entered a few BJJ tournaments, who teaches BJJ at your school and how qualified are the students?

There is no BJJ competition in Vietnam so we all must go overseas to compete and this cost a lot of money but we make this sacrifice because we want to test ourselves in competitions and to improve, and of course to win medals! And even though we are always the smallest team at the tournaments we always win quite a few medals at tournaments like the Thailand BJJ open and the Phillipines BJJ open!

Can you tell me a bit about yourself and your own background in martial arts?

My name is Long Van Nguyen, I am a Vietnamese-new Zealander. As well as being a martial artist and trainer, I have a university medical degree and was working as a medical doctor in some of the biggest hospital in Australia for seven years. I have been training in martial arts since I was 17.

I got into Muay Thai while I was studying to become a medical doctor at university, and really loved it.I really like the martial art side of it and the competition fighting side of it. I had a few Muay Thai fights and then discovered BJJ and MMA and just really love how it all make sense and how it really work in real life and how I can still incorporate Muay Thai into it.

As I love martial arts and competition and fighting I was really drawn to MMA because of its diversities of techniques and the fact that you could go out and compete and see who really is the best. I have had fights in Muay Thai and Boxing and MMA and lots of BJJ competitions.

When I was in New Zealand and Australia I was fortunate enough to have trained at some of the best gyms in those countries with some great coaches like Mark Hampton who is like the maker of fight champions in New Zealand, Phillip Bennett who is one of the best Muay Thai fighter in the world and Larry Papadopoulos who is like the god-father of Australian MMA. I learned a lot about how to train and how to fight from these guys.

Two years ago I came back to the land of my birth to open the Vietfighter Gym with the aim of educating Vietnamese about MMA and Muay Thai and BJJ and to grow these martial arts and sports that I love in Vietnam.

Do you feel like there is a lot of potential for MMA to grow in Vietnam?

Yeah I believe that there is a huge potential for MMA to grow in Vietnam. Right now there are more and more people who are asking about MMA even though there is no exposure to MMA in Vietnamese media and most of the MMA media is in English and most Vietnamese cannot read or speak English.

Once there is more exposure to MMA, it will grow very fast. This is part of Vietfighter Gym’s mission statement, to educate Vietnamese about MMA and to grow the sport. Vietnamese also like martial arts and fighting so yeah they will like it once they are more exposed to it.

In term of Vietnam producing its own home grown MMA fighters, I believe it is a few years away. However as we can see from examples like Nam Phan that Vietnamese fighters can do well in MMA if they can have access to good trainings. This is one of the purpose of Vietfighter Gym, our primary goal is to bring high quality MMA training to Vietnam and one day produce Vietnamese MMA world champions who are born, raised and trained in Vietnam.