Not that you need any further proof of Jon Jones dominance over Rashad Evans in the main event of UFC 145 last night (Sat., April 21, 2012) at the Philips Arena in Atlanta, Georgia, but here's the numerical evidence.

According to FightMetric.com, the official statistics provider of the UFC, Jones landed 116 total strikes (105 significant) to just 49 total (45 significant) from Evans. The more telling number, however, is the fact that of Rashad's 49 strikes landed, just 18 went to the head.

That distance is hard to close, especially now that "Bones" has become so proficient at using his considerable reach advantage.

The grappling game was nearly nonexistent. It's only notable for the fact that "Suga" failed to take his former teammate down, going 0-for-4 in takedown attempts throughout the five-round, 25-minute fight.

By the time all was said and done, Fight Metric had Jones winning by a score of 50-44 with an effectiveness score of 400 to Evans' 134. For a detailed explanation of Fight Metric's scoring methods click here.

More after the jump. 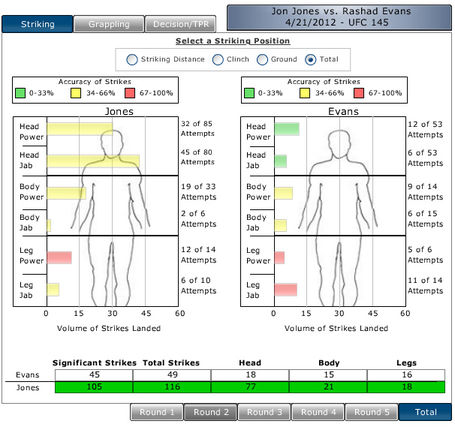 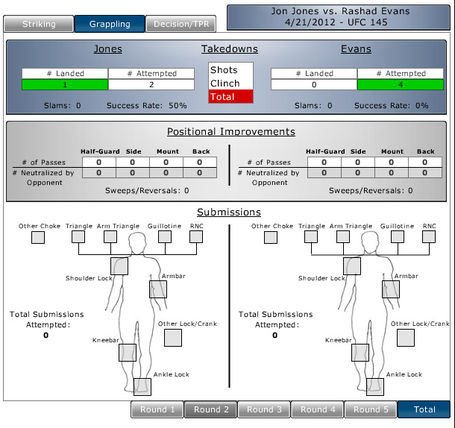 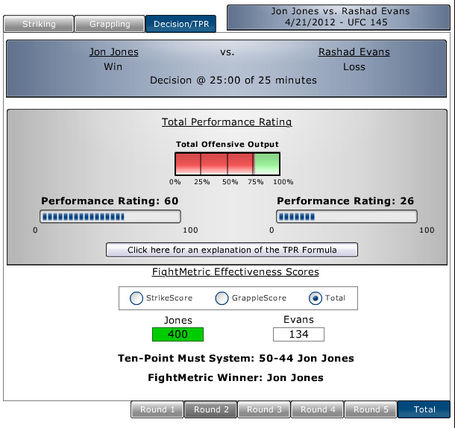 To read the full report from Fight Metric (and you should) click here.

For a more detailed breakdown of "Jones vs. Evans" click here. To watch highlights of the fight click here. And for complete UFC 145 results and blow-by-blow coverage of all the night's action click here.