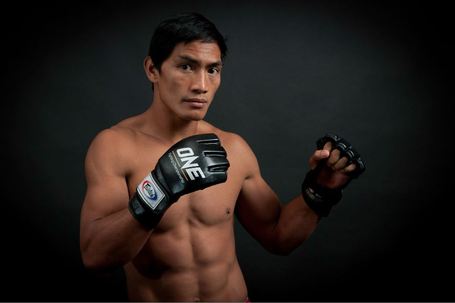 Eduard Folayang is the most popular fighter in the Philippines and one of the fastest rising stars in all of South East Asia but he suffered a surprise setback when he was beaten for only the second time in his career by Ole Laursen at ONE FC 'War of the Lions' last month.

It was as controversial as it was surprising, most felt before that Folayang's superior fitness would make the difference while many who watched the fight believed that the Filipino had done enough to deserve to be on the right end of a split decision after 15 minutes of all out action.

It was a difficult fight to score, although Folayang fans will point to the much more visible damage done to Laursen's face at the end as evidence that their man should have won. You can judge for yourselves:

ONE FC War Of The Lions: Ole Laursen vs Eduard Folayang (via OneFCMMA)

One person who is not complaining is Folayang himself, who saw a six fight win streak snapped by the decision loss,

"I believe I had given my best for that fight and the decision is up on the judges hands. Losing is just part of growing and becoming a better person and I learned a lot of things from this experience which I think will help me to be a better fighter in the future."

In Folayang's previous fight for ONE FC he showed tremendous stamina to bounce back from a broken nose against Korean A Sol Kwon and dominate the final two rounds. This time around he seemed to tire down the stretch and he credits this entirely to Laursen, who he thinks was a much more formidable foe than the Korean who was 17-6 when they fought,

"I did get more tired than in my last fight for One FC and there's a lot of factors for that. One reason is that Ole is more well rounded fighter than Kwon. Ole really prepared for that fight and showed a good improvement on his cardio."

Given that Laursen came into the cage with outstanding Muay Thai and K-1 credentials Folayang could have been forgiven for assuming he would attempt to keep the fight standing. Instead the Boracay based fighter completed a series of successful takedowns which might have made all the difference to the decision and Folayang admits this strategy took him by surprise

"I didn't expect that he would be attempting for takedowns and I overlooked my training in that area. One FC has already talked about another fight between us and next time I will be sure to prepare properly and be ready for anything, not just his striking."

A rematch is widely anticipated to take place in Manila on September 1st. It is the city where Laursen was born as well as the capital of the country where Folayang is a hero and he would welcome the chance to avenge his most recent loss,

"I have no fight scheduled now and I'm taking a break while we are still planning the next move in my career. I would be happy to fight Ole again, we didn't talk yet about it but I'm open for any plans that the ONE FC is preparing."

There are plenty of other potential opponents in the lightweight division including Eddie Ng. Rustam Khabilov and Zorobabel Moreira but all signs point to an immediate rematch with Laursen. It is an enticing option for ONE FC matchmakers for two reasons, firstly the result of the first fight was not clear cut and secondly it was an entertaining affair which won fight of the night honours.

Initially they were reluctant to face each other because both are Filipino, although Laursen grew up in Denmark while Folayang has spent all his life in Boracay, and are on good terms. The friendship will have to go on hold for a little longer because the two are likely to fight at least one more time but for Folayang it is strictly business,

"We will still be friends no matter what happens when we fight on the ring. It is our job to put on a good show for the fans, it's nothing personal."