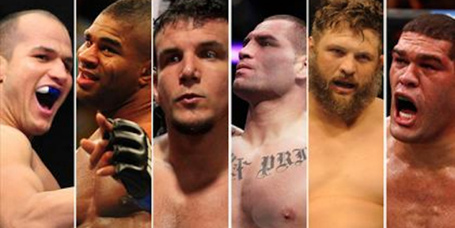 Alistar Overeem, Antontio Silva, and Fabricio Werdum has joined Cain Velasquez and Frank Mir to give much needed beef to the division's title picture. Last year the top of the division was in disarray. Brendan Schaub was heading into an August 27 fight at UFC 134 against an aging Antonio Rodrigo Nogueira, who had been on the shelf for nearly a year and half. Many believed that if Schaub won the contest he could be a serious title contender due to the lack of depth at the top of the division. That just goes to show you how far this division has come in a year.

Both Chad Griggs and Shane Del Rosario, who's combine record is 22-1, will help thicken up the middle of the division. They join Matt Mitrione and surging prospect Stripe Miocic near the middle of the pack. Currently, however, I have Del Rosario unranked due an extended layoff caused by the merger.

Shawn Jordan and Lavar Johnson have both made their impact felt, winning their UFC debutes over Oli Thompson and Joey Beltran respectively. They join guys like Phil De Fries and Pat Barry near the bottom of the division.

Of course the division will drastically change with UFC 146 around the corner on May 26.......

Yeah it kinda sucks for fight fans that Junior Dos Santos will most likely not defend his title against Alistar Overeem. The rest of the main card, however, will have a major impact on future Heavyweight rankings. The Frank Mir vs. Cain Velasquez fight, one which Dana White assures will stay intact, will probally produce the next #1 contender. Antonio Silva makes his debute against Roy Nelson. If Silva wins, he could make a claim for a top 5 ranking. Roy Nelson, who has loss 3 of his last 4, needs a win to stay in the top 10 and among the elite. Both Mark Hunt and Stefan Struve has been surging as of late. A win by either, could move them top 10 and set them up for bigger fights in the future. Gabriel Gonzaga and Shane Del Rosario fight for a possible top 15 ranking.