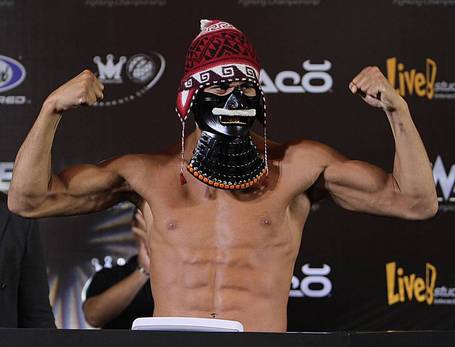 Felipe Enomoto's choice of headgear at the official ONE FC 2 weigh in might have seemed a little bizarre, but it actually told a story about his unusual mixed heritage. The Japanese Manga mask and traditional Peruvian hat are worn in homage to the countries from where his parent's came.

His performance the following night said even more about where the fighter, who grew up in Switzerland, is going. In the second round of a back and forth war which had the fans at the BritAma Arena in Jakarta on their feet, he submitted Ole Laursen, putting and abrupt end to the K-1 veterans' five fight winning streak.

In doing so he became only the third man, after Caol Uno and Genki Sudo, to defeat Laursen. The crowd definitely liked it and so, apparently, did the ONE FC matchmakers, because both men were invited back for the next show and Enomoto was once again given main event status.

This time, the challenge will be a little different.

Laursen is primarily a stand-up fighter and came out swinging looking for an early knock out but Zorobabel Moreira, who he is scheduled to face at the Singapore Indoor Stadium on March 31st, is an accomplished grappler and a Brazilian Jiu-Jitsu (BJJ) world champion.

His brother, Yasubey, is the M-1 Welterweight Champion and at one stage the two of them were neck and neck in their MMA careers with identical 5-1 records. However 2011 was much kinder to Yasubey, who went 3-1 and picked up a title in the process, than Felipe who lost his only fight of the year to outstanding Armenian Gor Harutunian.

It was his second successive defeat but he he bounced back against Laursen and could quickly establish himself as a credible challenger for the inaugural ONE FC Lightweight belt if he beats Moreira.The Brazilian will have the support of the Singapore crowd behind him because he trains at Evolve MMA but Enomoto is just excited to be fighting in the biggest indoor venue in South East Asia,

"I heard there would be 7,000 people there and I don't think I've ever fought in front of many people before but I'm looking forward to it, even they won't be cheering for me during the fight. I wasn't injured after my last fight, I trained a little the next day and I have also been helping my brother Yasubey prepare for his fight."

Enomoto was reluctant to discuss Moreira beyond describing him as 'dangerous' and saying another knockout win would be 'nice'. Whatever happens on March 31st it is unlikely to resemble his last fight because Moreira is far less likely to throw caution to the wind and go for the KO like Laursen did.

That fight was an out and out slug fest and Enomoto had to walk through several solid left hooks before landing a perfect head kick which knocked the Filipino fighter down and allowed him to take his back and sink in the submission.

It appeared that Laursen was finally starting to find his range in the second round as he repeatedly landed leg kicks and was sufficiently confident to drop his hands, a mistake which he got punished for (see photo below), but that's not how things felt to Enomoto,

"It felt like I was getting more loose, finding my groove and landing good punches. When my brother called for the left high kick I just did it. His leg kicks looked way more dangerous than they actually were but it was good for him to do them, because he scored some points. Maybe later he would have landed one which hit the right spot to affect me, who knows? Would of... could of.." 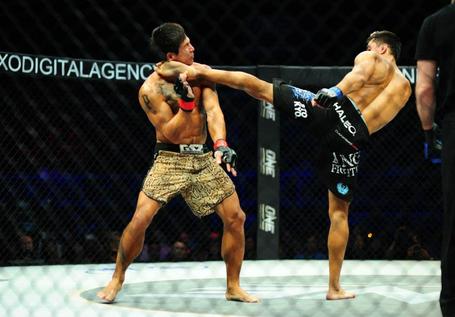 Laursen appeared to go for broke in the opening round, putting all his power into every single punch. Given that his opponent came in with a reputation as being a stand up fighter and had faced the likes of Andy Souwer, Buakaw Por Pramuk and Masato in his K-1 career I wondered if Enomoto was surprised that he was so wild with his striking,

"No, I wasn't surprised. He just wanted to knock me out quick and with those smaller gloves you just need to connect. It's not a question of 'who can punch more beautifully in the high caliber striker status contest?' and I would not say he was swinging wild as negative. Is a high caliber striker not allowed to throw heavy leather? If he would knocked me out with one of those 'wild' strikes nobody would criticize those punches."

A number of those punches did connect, in particular some hard left hooks which would have buckled the knees of most fighters but Enomoto just found a way to walk right through them. He exhibited what most observers would describe as an 'iron chin' but claims this is a characteristic he has never really considered,

"I was not thinking about that during the fight. When somebody punches me I don't usually think 'my chin is really good', I just think 'I need to punch him back'."

His reward for that performance was a fight with a man who is widely regarded as one of the best prospects in the entire 155 lbs division. Moreira's BJJ is world class and he stands at 6'3" making him unusually tall for a lightweight. In his last two fights he has seen off experienced veterans Ferrid Kheder and Andy Wang and is one of the stars of ONE FC.

Enomoto has been in there with top fighters in the past including Akira Corassani and Rich Clementi and knows that back to back ONE FC wins would completely revitalize his career. Next week he will be in Russia to corner Yasubey who is looking for his fourth successive M-1 win, if both brothers succeed in extending their winning streaks March could be a very good month for the Enomoto family.