Share All sharing options for: Pic: Miesha Tate's broken arm after submission loss to Ronda Rousey at Strikeforce in Ohio

This is what it looks like when you think wrestling trumps judo nine times out of 10 and when you don't worry about getting armbarred when fighting Ronda Rousey.

At tonight's (Sat., March 3, 2012) Strikeforce event in Columbus, Ohio, now former Women's Bantamweight Champion Miesha Tate found out the hard way that having pride and waiting until the last minute to tap means getting your limb snapped.

Especially when a "Rowdy" lady like Rousey has you in her grasp.

The victory caps an insanely awesome run through the 135-pound division for Ronda, who talked her way into a title shot with no previous experience in the weight class and delivered on everything she promised ... and more.

For a more detailed look at the Rousey vs. Tate fight click here and for complete Strikeforce results and blow-by-blow coverage of all the night's action click here.

Check out another sick pic of Tate's arm after the jump. 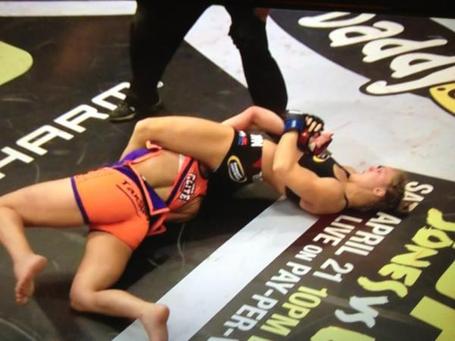