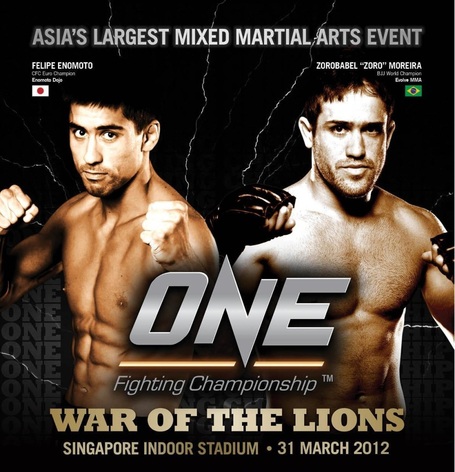 ONE Fighting Championship 'War of the Lions' was always set to be a seminal moment for Asian mixed martial arts (MMA) because it features the highest caliber card in the promotion's history. This event gained even more momentum and significance with the surprise announcement this afternoon that it would be made available in its entirety completely free of charge on YouTube.

ONE FC CEO / Victor Cui had the following message for fans, who had initially been told that they would have to splash out $24.95 USD to view the 11-fight card:

"As a gift of appreciation to all MMA fans around the world, I have decided to make the broadcast of the entire fight card for ONE FC: War of the Lions on March 31 completely free-of-charge in HD quality on our YouTube Channel. I want the world to see that Asian MMA is back bigger and better than ever! ONE Fighting Championship is Asia’s largest MMA organization with the biggest pan-Asian media broadcast to a potential 500 million viewers across 24 countries. We are here to lead the way in Asia!"

Formed in July 2011 ONE FC has already firmly established itself as the most prestigious promotion in Asia by continually looking to expand its viewership. A ten year partnership with ESPN Star Sports came into effect recently which means that both the first two shows are being broadcast on regular rotation to 24 countries across the continent.

At present that partnership is only for a delayed broadcast but by streaming the next event free of charge ONE FC is effectively guaranteeing that hundreds of thousands of people across the world get to experience one of the best MMA cards of the year anywhere live.

It might mean a cut in pay-per-view (PPV) revenue but the audience for the broadcast will be massively increased which means more exposure for fighters and better value for sponsors. Only this morning ONE FC announced potentially lucrative partnerships with Sony and True Fitness which would indicate that this approach is already paying dividends.

Dana White has gone on record as stating that he does not believe that pay per view is a part of the long term future of the UFC and Victor Cui would appear to agree with him. ONE FC's stated ambition is to introduce MMA to the entire continent of Asia and allowing people to view the next show for free, as opposed to only making it available to the minority of MMA fans willing to pay a one off fee, is a fantastic way of doing this.

ONE FC has already held events in Singapore and Indonesia with further cards booked in Kuala Lumpur and Manila and more destinations close to being confirmed. The ascension of this organization has been remarkably rapid and with delayed broadcasts of old shows on ESPN Star Sports almost every night and this Saturday's show likely to attract a record breaking online audience Asia's largest MMA organization is certainly living up to the hype.

For more information about the exact broadcast time in your region visit: www.onefc.com.

ONE Fighting Championship 'War of the Lions'