ONE Fighting Championship 'War of the Lions' is one of the biggest cards in Asian history and between now and March 31st I will be previewing every fight, working my way up the card, starting with ...

Danny Van Bergen's strength is listed on the M-1 website as 'stand up' and given that he trains with Melvin Manhoef you can probably get a pretty good idea of what the Dutchman brings to the table. That's actually a bit misleading because six of his ten wins are by submission, only one of them is by KO or TKO.

His record of 10-10-3-1 is not exactly outstanding but he has beaten some tough fighters such as Mick Sinclair and Danial Sharifi and won't regard Whitson as an insurmountable obstacle. The American is very well rounded and as you would expect from a Team Quest fighter, he has strong wrestling.

Whitson has an outstanding record of 11-2 and has never been stopped by strikes, with losses coming by way of submission and split decision, although he was also submitted by Ross Pearson during his stint on The Ultimate Fighter.

He's been preparing for this fight at Evolve MMA, where his coach and manager Heath Sims heads the wrestling program, so his BJJ, Muay Thai and boxing should be razor sharp after working with the world champions there. Whitson has signed a long term contract with ONE FC and there are some big fights waiting for him in the lightweight division if he has a successful debut.

Van Bergen has basically nothing to lose here. In all probability he needs to win and win well if he wants to get another fight with ONE FC so he might well throw caution to the wind and go looking for the stoppage. Whitson needs to register a win after suffering the first decisive loss of his pro career recently and is likely to come in with a specific gameplan to nullify his opponent.

With neither man having any obvious connections to Asia this could be a quiet affair and that's probably why it is the first fight of the night. Hopefully these two will make a real effort to put on a show and make it a fight to remember. 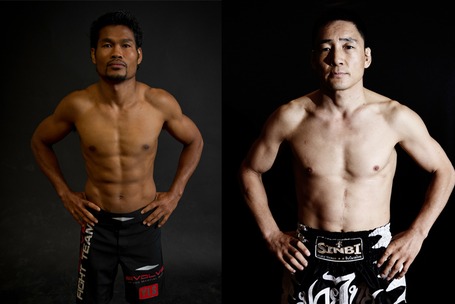 This is a fight I cannot wait to see. Muay Thai champion Daniel Mashamaite offered only token resistance on Yodsanan Sityodtong's MMA debut but the Thai fighters striking looked scary and no-one in the bantamweight division is going to want to stand with him.

Jiang Long Yun could well be the exception to that rule because he has more MMA experience and is a Sanda fighter from China who says he won't be afraid to trade strikes with the former WBA boxing world champion. In his last fight he knocked top ranked Chinese fighter Honggang Yao out so badly he was worried he might have done him permanent damage.

Yodsanan has knocked out no fewer than 47 opponents in his boxing career and has heavy, heavy hands. He has also got around 50 Muay Thai fights to his name but might never have faced anyone with Jiang's sideways Sanda stance.

The Chinese fighter does have a background in wrestling but he claims he isn't planning to use it and I am inclined to believe him. This should make for an explosive contest because you know Yodsanan won't be shooting for any takedowns.

I love the way Yodsanan uses his hands. Lots of so called boxing specialists in MMA tend to bounce around and sacrifice power for plenty of movement but the Thai knows how to sit down on his punches and is always looking to finish the fight with them.

Don't write off Jiang though, he is much more experienced and with five times as many fights and wins over high caliber opponents could even be considered the favorite. For me this is a dream match up and one I can't wait to watch.