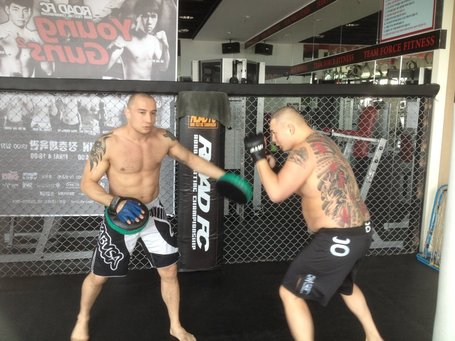 Dennis and Tommy Kang working out in the official Road FC gym.

Road FC 7 'Recharged' is taking place at the Jangchung Gymnasium in Seoul this Saturday (March 24, 2012) and Denis Kang's brother Tommy will be making his professional mixed martial arts (MMA debut) on a 12-fight card. The main event sees Kyung Ho Kang take on Japan's Shoko Sato in the quarterfinal of the bantamweight tournament.

Kyung has already been eliminated once after failing to make weight before his fight with Andrew Leone and being penalized a point per round which contributed towards a decision loss. Road FC decided to give him a second chance and reinstate him in the tournament where he will be joined be ONE FC veteran Soo Chul Kim who takes on Jae Hoon Moon in another quarter final.

Soo was one of the rising stars of Asian MMA but his career has stalled a little after being beaten by experienced Brazilians Leandro Issa and Gustavo Falciroli in 2011, as well as suffering a submission loss at the hands of Leone. He is still only 20 years old and will be looking to get back on track by beating Moon.

Competing for the fourth and final spot in the semi finals will be Min Jung Song and Jae Hyun So. The card also features the international debut of Roan Carneiro who had a stint in the UFC from 2007-8, going 2-3 with wins over Rich Clementi and Tony DeSouze and losses to Jon Fitch, Kevin Burns and Ryo Chonan.

The Brazilian will be up against experienced Korean Jung Hwan Cha who holds a 2010 win over Ryo Chonan but has been relatively inactive of late, fighting only twice in the last two years. Another interesting match up sees Korean submission specialist Chang Hyun Kim take on Japan's Takasuku Kume.

Tommy Kang does not appear to have been given an easy ride despite his brother's reputation. He is up against Eun Soo Kim who only made his debut last year but has a 2-1 professional record and has faced some tough opponents.

If Kang can win this fight there will be no questioning his legitimacy as a fighter.

Road FC was formed in 2010 by multimillionaire businessman Moon Hong Jung who was also a very successful kickboxer and is a long term MMA student. It is currently the only professional promotion in Korea and this Saturday's card will be the seventh in total and the third to take place in the 7,000 capacity Jangchung Gymnasium in Seoul.