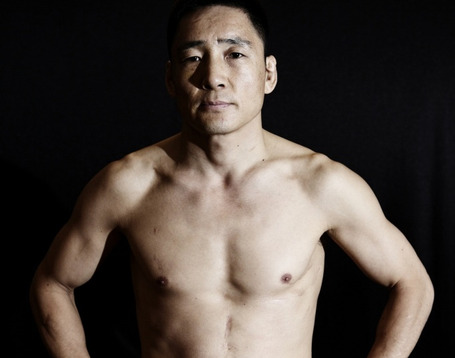 Jiang Long Yun was one of the top fighters in China, but has been out of action for over a year since subjecting former Legend FC Bantamweight champion Honggang Yao to a brutal stoppage loss. Since that fight, in September 2010, he has been concentrating on his coaching commitments but 'The Northern Tiger' will be back in action at ONE FC 3 this month.

It will be his third time fighting at Singapore and he will be up against a formidable foe on March 31st in the shape of former WBA World Champion Yodsanan Sityodtong. The Thai fighter has terrifying punching power with 46 of his wins as a professional boxer coming by way of knockout.

Yodsanan will be returning to the Singapore Indoor Stadium where he made his professional mixed martial arts (MMA) debut last September, stopping Muay Thai world champion Daniel Mashamaite in the second round. He will have the hometown crowd behind him but Jiang is likely to pose a much tougher test.

The Chinese fighter has an amazing opportunity to silence the Singapore crowd, who will be rooting for Yodsanan because he lives locally and is part of the Evolve MMA fight team. Far from fearing such an accomplished striker Jiang, whose only loss was to BJJ world champion Leandro Issa, says he is looking forward to the stand up exchanges.

"I'm not worried about his punching power, If I was worried I would not be fighting. MMA is a different game, he might be a good striker in boxing however we will have to see how he does in MMA rules. Four ounce MMA gloves are different than boxing gloves, we will know who has the harder chin at the end of the fight."

Jiang's last fight was probably the best of his career as he became one of only two people to ever defeat Honggang Yao who was being touted as the top 135 lbs fighter in China. he was unable to even celebrate that win properly because he was concerned at how badly he might have damaged his opponent.

"Yao Hong Gang is a very good wrestler, and is about 5 kilos heavier than me. It was a very close fight. I was a boxer and also practiced Sanda thus my striking ability enable me to KO Yao Hong Gang. I punched him in the eye with a superman punch which caused some serious injury and the fight was stopped. It was a scary event as he was hospitalized and I was afraid I had seriously injured his eye."

Jiang is also an expert in Chinese Wrestling but regards himself as a stand up fighter who is better off being matched with opponents who will not try to take him down.

"I prefer to fight opponents that are strikers to keep the game interesting. Yodsanan is very famous for his striking and I think we will have a good match. I think I am more well rounded fighter than Yodsanan, however he trains with some of the best coaches in Asia so I expect a very tough fight."

He has fought in Singapore twice before, being submitted by Yodsanan's team mate Issa at Martial Combat 1 and defeating Kian Pham by decision at Martial Combat 5 in a straight striker vs grappler match up in which the Chinese fighter's Sanda prevailed over the Australian's ground based offense.

He has fond memories of Martial Combat and is proud to have been one of the few Chinese fighters to enjoy success fighting for this promotion.

"Martial Combat was a good opportunity for me to fight internationally. At first I was not used to the unified rules because in China we can kick downed opponents and also I was not ready for the level of the ground game my first time fighting. The second time I fought my ground game improved and my opponent and I fought most of the fight standing. I think it was a big upset for my opponent as many of the Chinese fighters had been coming in as underdogs." 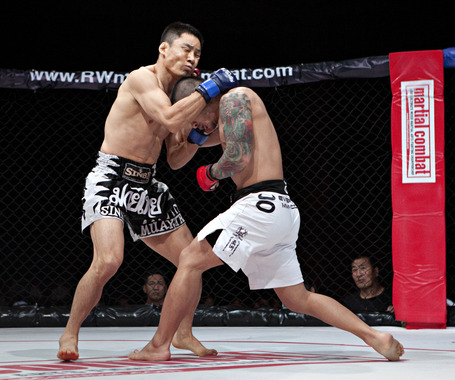 Although Jiang has been out of action since stopping Honggang Yao with the superman punch in 2010 he has been training and teaching regularly and is still in good shape for his comeback.

"MMA fight productions in China are only occasional and most of the time I prefer to send my students to fight. Also there are not many fighters my size so I end up getting challenged by fighters much bigger than me. I did fight in Ultimate Wrestle in Henan which is where I beat Yao Hong Gang."

He hails from Heilongjiang, a province in the North East of China which is sandwiched between Mongolia and Russia, hence the nickname 'Northern Tiger'. The majority of fighters doing well at Legend, Ruff and even, in Tiequan Zhang's case, the UFC train at either China Top Team or the X'ian Sports Institute but Jiang is confident that the calibre of training he receives is just as good and believes that his experience will be key in helping him to silence the Singapore crowd by beating Yodsanan at ONE FC 3.

"I train in Heilongjiang. We have a mix of fighters coming in to train with me including Judo professionals, Boxers, Sanda fighters, and Chinese Wrestlers. Most guys are bigger than me however I still train and believe my experience gives me an edge over them. The Chinese striking is different than Muay Thai as we like to keep our distance a bit farther apart. I would say its more closer to boxing."

Yodsanan is not only the best boxer to ever take MMA seriously he also has experience of fighting Muay Thai at a very high level in Thailand. However he is unlikely to have been up against anyone with Jiang's unorthodox stand up style and it is a puzzle he could struggle to solve.

With neither fighter likely to shoot for the takedown this looks set to be a straight Sanda vs boxing / Muay Thai match which has fight of the night written all over it. If Jiang does prevail even though his victory over Yao was over a year ago these back to back wins would instantly establish him as one of the top bantamweights in Asia.

The full ONE FC fight card is available for pay-per-view online at US$24.99. For more information visit: www.ONEFC.com.