UFC 143 results recap from last night for 'Diaz vs Condit' in Las Vegas on Feb. 4

Share All sharing options for: UFC 143 results recap from last night for 'Diaz vs Condit' in Las Vegas on Feb. 4 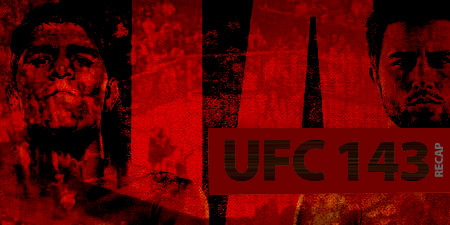 The sun has set on yet another Ultimate Fighting Championship (UFC) pay-per-view (PPV) event from the Mandalay Bay Events Center in Las Vegas, Nevada. And for the first time since April 2008, the mixed martial arts (MMA) promotion has a new (interim) welterweight champion not named Georges St. Pierre.

Condit squeaked by the Stockton, Calif., slugger in the UFC 143 main event, backpedaling for essentially five rounds and playing a strategic -- and apparently very effective -- game of keep-away for five full rounds. The "Natural Born 'Kicker'" slipped punches, circled and countered with effective strikes and kicks, while keeping his distance and refusing at all costs to get trapped along the fence.

Diaz was, unsurprisingly, the aggressor throughout the entire interim welterweight title fight. He walked down Condit and attempted to corner him up against the cage, or at the very least, get him to exchange in the center of the Octagon. He soon began to talk trash, throw up his hands and bait Condit into fighting his fight.

Condit never bit. Not even a nibble.

On the contrary, Condit was remarkably disciplined and stuck to his gameplan. And midway through the third round he appeared to find his groove, loosening up and starting to score points with the judges. He found a home for his leg kicks, as well as another for his shin on Diaz's grill more than a few times.

Mix in some nice, creative strikes in short bursts, and it was a recipe for success.

Condit got himself in some trouble in the final minute of the fight, getting tripped and letting Diaz -- a very dangerous Brazilian jiu-jitsu black belt -- take his back and work for a fight-ending submission. Condit defended the choke well, and then the following arm lock, to seal his split decision victory and earn an invitation to unify the belt against St. Pierre later this year once "Rush" is fully recovered from recent knee surgery.

Diaz, meanwhile, was so upset with the decision that he declared that he was "done with MMA." It was clearly an emotionally-charged statement and one that he will likely revise in the days, weeks and months ahead as the bitter taste of controversial defeat begins to wane.

In the co main event, heavyweights Fabricio Werdum and Roy Nelson collided in what turned out to be an exciting, back-and-forth slugfest that ended with the Brazilian's hand raised in victory after 15 minutes of action.

It would have ended sooner if Nelson's chin wasn't made out of otherworldly, indestructible material, but alas, "Big Country" can take one hell of a punch ... and crushing knees, too. Werdum connected kneecap-to-nose on more than one painful occasion, even making it squirt blood all over Nelson's big belly.

Yet somehow, someway, Nelson remained upright and kept trudging forward, looking to land one big shot and rip a Hail Mary victory from the clutches of defeat. It never came.

Werdum -- who hadn't seen the inside of the UFC's Octagon since Oct. 2008 -- went on to earn a unanimous decision, but it certainly wasn't without a fair share of shaky moments. Nelson rocked him with a few good 'ole fashion haymakers, but he managed to recover quick and notch a very important victory that will get him on the heavyweight contender radar.

And if we're lucky, maybe Frank Mir's radar, too.

Before their welterweight showdown, Josh Koscheck promised to be the first man to finish the resilient Mike Pierce. He didn't honor that promise last night. Not even close. In fact, he's fortunate that he left "Sin City" with a win.

Pierce essentially fought his fight, closing the distance and boxing up "Kos" in the clinch, as well as alongside the cage. He even pumped the jab, finding a home for it early and often right on the face of the American Kickboxing Academy (AKA)-trained fighter.

Koscheck appeared puzzled, uncomfortable and unsure of how to go about putting points on the judges scorecards. He eventually came to his senses and resorted to his bread and butter, high-level wrestling, to land several very important takedowns, which if he didn't land, more than likely would have cost him the fight.

Even though Koscheck didn't really do much with the takedowns, they were a critical component of his split decision victory. One that will keep him on the up-and-up in the welterweight division, whether MMA fans like it -- or agree with this evening's decision -- or not.

It wasn't pretty, and it certainly wasn't as easy as he predicted, but he got the job done. Someone get Johny Hendricks on the horn immediately: That's a match to make, all things (Jon Fitch) considered.

Renan Barao doesn't just look like a complete psychopath, but he kind of fights like one, too. The Nova Uniao-trained fighter lost his first-ever MMA fight way back in 2005 and hasn't looked back since, reeling off a ridiculous 27 consecutive victories.

Barao stormed past Scott Jorgensen, a former number one bantamweight contender, in a very fast-paced, exciting fight that went the distance despite the Brazilian's best efforts to end it sooner. He drilled "Young Guns" with several blistering strikes, but Jorgensen was just too durable to go home early.

Jorgensen appeared to abandon his biggest strength (wrestling) early, opting instead to sling leather with his much more accomplished striking counterpart. Either that, or he determined that Barao's takedown defense was just too good to continue testing.

Regardless, Barao punched, kneed and kicked himself to a another solid victory. In the process, he clearly established himself as perhaps the most serious threat to Dominick Cruz's 135-pound world title. He wants a chance to fight for it, shrieking in Portuguese after his win, "I WANT THE BELT!" but he'll have to take a spot behind Urijah Faber.

After that It would most likely be wise to do what the man says and give it to him. Immediately. Before someone gets hurt (again). He's scary.

After suffering a terrible in-cage knee injury during a fight against Aaron Simpson more than two years ago, it appeared that the MMA career of Ed Herman was on the fritz. "Short Fuse" had dropped three of four bouts and it didn't appear that The Ultimate Fighter (TUF) 3 alum would be able to make a significant contribution to the 185-pound division moving forward.

Herman, riding a two-fight win streak, strutted into the Octagon last night to battle Clifford Starks, a strong, undefeated wrestling-minded fighter who would certainly test the tension of his surgically-repaired knee ligaments with takedown attempts and scrambles.

However, Herman beat him to it, securing two takedowns after the pair traded leather throughout most of the first rounds, the second of which led to a rear naked choke submission finish. In fact, Starks seemed content to stand and trade with Herman, landing several hard shots that probably would have dropped lesser competition.

It was certainly a much different, and much improved, performance from Starks in the striking department since his unanimous decision win over Dustin Jacoby in Oct. 2011. But, unlike that fight, it didn't get the job done against a dangerous, well-rounded fighter like Herman.

Stick with what works. Herman did and now he's back in the thick of things, most likely earning another televised fight in a future against a notable opponent. His hard work to turn his career around is paying off.

And it could not have come at a better time with the middleweight division in need of a talent injection.

That's enough from us. Now it's your turn to discuss UFC 143: "Diaz vs. Condit" in the comments section below.

Do you agree with the Diaz-Condit decision? Is Diaz really done with MMA? Does Werdum have what it takes to make a run at the title? Who should "Contender Killer" Koscheck fight next? Is Barao a future champion in the making? Let's hear it, Maniacs.

Be sure to also check out our complete UFC 143 blow-by-blow coverage of the entire "Diaz vs. Condit" event right here.

While you're at it, check out our fight-by-fight recaps, video highlights and immediate reactions for UFC 143:

Last, and certainly not least, check out our complete UFC 143 results recap of the Facebook/FX "Prelims" right here.