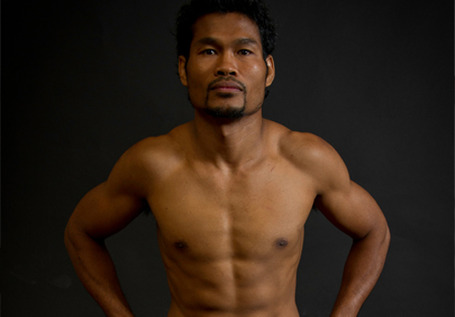 A lot of fighters fluctuate in weight and like to let themselves go a bit in between fights and almost all of them take a bit off time off between training camps to recuperate, recover and generally take it easy.

It is an achievement made even more remarkable because Yodsanan's knock out power has remained with him throughout his career. He has an incredible boxing record of 57-3-1 and has won 50 of his last 51 fights with two of those three losses coming in his first year as a pro.

He did briefly move up to 140 lbs in 2009 to claim the Australasian Light Welterweight title but had no problem getting back down to 135 lbs last September to destroy Daniel Mashamaite at ONE FC 1. He celebrated his 37th birthday last year but believes he has more longevity than most because of the care he has taken of his body.

"I have never smoked or drank alcohol in my entire life. I have also never had a break from training in my whole life. I still run every day as I did when I was a child at Sityodtong Camp, I have never stopped. So even though I am 37 years old my body is still young and strong."

There is often cynicism when a world class boxer announces they are transitioning to MMA. Fans are inclined to suspect them of simply jumping on the bandwagon with a view to picking up a James Toney style pay day. However Yodsanan finished his boxing career in a high, stopping all of his last nine opponents and is far from being past his prime.

He is now totally committed to his MMA career and is training every day with the team of world champion trainers at Evolve MMA in Singapore. As well as being a renowned boxer Yodsanan also has plenty of Muay Thai experience and is being nurtured as a mixed martial artist by the likes of renowned wrestling coach Heath Sims and BJJ Mundials winner Rafael "Gordinho" Correa de Lima.

It is the perfect university for him to graduate from being an accomplished stand up fighter to a well rounded mixed martial artist and he has also been training alongside the likes of Shinya Aoki, Eddie Ng and Zorobabel Moreira. However Yodsanan was not rushed into his MMA debut at ONE FC 1 last September, in fact he had been preparing for well over a year.

"I have been training MMA for about two years. I have over 60 professional boxing fights and over 60 professional Muay Thai fights so I have been focusing a lot on my wrestling and Brazilian Jiu-Jitsu. Heath Sims, our new wrestling coach, has been a big help to me and everyone on the Evolve Fight Team. I train six days a week so I am fit all year round even if I have no fight coming up."

ONE Fighting Championship's rise has been meteoric with shows booked in major cities all over Asia and a broadcast deal which puts it in at least 24 countries and Yodsanan looks set to be one of the organization's stars. Only a knee injury sustained during wrestling practise kept him from competing at the Jakarta show earlier this month and now that he is fully fit again matchmakers have slotted him straight into the second Singapore card.

Yodsanan is currently halfway through an intensive eight week training camp in preparation for his next MMA fight at ONE FC 2 on March 31st. He will once again be fighting at the Singapore Indoor Stadium and is confident he will make an even better impression than he did on his debut,

"My opponent is confirmed but I cannot discuss anything until ONE FC releases the fight card. I was nervous before my MMA debut and I hope to perform better on March 31. I want to fight as many times as possible in 2012, I want to be very active as a fighter. MMA is my career now."

Mashamaite came into the fight with Yodsanan with more MMA experience and a strong background in Muay Thai but he wanted no part of the stand up exchanges and shot for the takedown at the earliest opportunity. This will probably be the blueprint for future opponents because no-one in the bantamweight division is going to want to trade punches with a world champion boxer.

"I have adapted my style for MMA, but my KO power is still there. I love to knock people out, it is my specialty."

A lot of MMA fighters talk the talk when it comes to having knockout punching power but with 47 KOs to his name at an elite level of professional boxing Yodsanan well and truly walks the walk. He is probably pound for pound the best boxer in MMA today and age doesn't appear to be in danger of catching up with him anytime soon.

He is also surrounded by some of the top trainers and fighters in the world at Evolve MMA and it is an environment in which he should flourish because he will continue to improve regardless of whether he has a fight booked. Yodsanan has won more than his fair share of silverware but is far from content to sit back and reflect on his illustrious career to date, his focus is firmly on the future,

"I love it here. Evolve MMA is my family and I have known Chatri (the owner) for over 20 years from our days together at Sityodtong Camp in Pattaya. Here in Singapore I am getting the best training in the world and 7,000 people buy tickets to come and watch me fight, that makes me so happy and excited about MMA, I love this new sport."