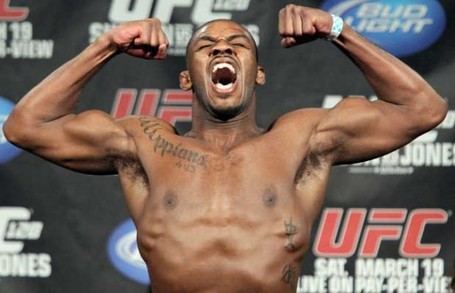 FanPost edited and promoted to the front page by Geno Mrosko.

Jon Jones is the polarizing UFC light heavyweight champion and widely regarded as the 2011 "Fighter of the Year" after sporting a 4-0 record with wins over three previous division champs. Despite some strong competition for the belt in the works for 2012 (see: Evans, Rashad, Henderson, Dan), many are already looking for bigger and better challenges.

They don't get any bigger than the UFC heavyweight division.

Towering over the light heavyweight division, the man known as "Bones" sports the UFC's longest reach at 84.5 inches, already putting him ahead of any potential heavyweight challenger. But how does he really stack up? Which UFC heavyweights can give the 205-pound champion a proper staredown?

A more detailed look after the jump

Let's take a look at how "Bones" measures up.

He recently stated 240-pounds would be an ideal weight for him at heavyweight. He is 6'4'' and sports the previously mentioned 84.5 inch reach. We'll look at each measurement in detail:

240-pounds: You may be surprised to learn that "old school" heavyweights like Antonio Rodrigo Nogueira (239-pounds), Mirko Filipovic (220-pounds) and even Roy Nelson (246-pounds) have no advantage over Jones. Even the chiseled Cheick Kongo (235-pounds) can't compare on the scales.

6'4'' Height: Of 31 fighters currently on the UFC heavyweight roster, only eight would be looking down on Jones at the weigh-ins. Four of those only have an extra inch on him, being listed at 6'5''. The last heavyweight champ taller than "Bones" was none other than the affable Tim Sylvia.

84.5 inch reach: We already know he has the longest reach in the UFC, but it may surprise you to know that other heavyweight monsters like Brendan Schaub (79.5 inch), Ben Rothwell (80 inch) and Gabriel Gonzaga (76 inch) come in with a sizable disadvantage here.

So that raises the question of who is close enough on paper to negate the genetic gifts of Jonny "Bones" Jones? Here's my list:

Frank Mir: Slightly behind Jones at 6'3" and a 79-inch reach, he may be able to negate some of that weighing in at 260-pounds (20 up on Jones). I would say neither fighter has a clear advantage on paper here.

Stefan Struve: The "Skyscraper" towers over Jones at 6'11'' and sports a similar 84-inch reach. Struve also gets the nod on the scales at 256-pounds and growing. On paper, Jones would have to look elsewhere to make up for this disadvantage.

Matt Mitrione: A fighter who holds the unique "genetic gift" trait, which probably helped in his NFL days. "Meathead" Is a respectable 6'3'' with a solid 82-inch reach. He also gets the nod at 255-pounds.

Shane Carwin: "The Engineer" has been in need of repairs for a wonky back, but not too long ago was considered the "other" superbeast of the UFC heavyweight division along with the recently retired Brock Lesnar. However, Carwin is a bit smaller at 6'2'' and a decent 80-inch reach. His only advantage is on the scale where he last came in at 256-pounds.

Antonio Silva: "Bigfoot" looks as daunting as the "Skyscraper" on paper at 6'4'' and an 83-inch reach. Cutting down to the 265-pound limit means Silva is one of the few who would actually look intimidating standing next to Jones.

Alistair Overeem: Known for being in the Sexy and I Know It music video -- oh and maybe those championships in MMA and kickboxing -- the horse meat fueled number one contender is a monster at 6'3'' with an 81-inch reach. Tipping the scales at 263-pounds has the "tale of the tape" in his favor for this hypothetical showdown.

From the above list, Carwin, Mitrione and Mir can consider themselves comparable to Jones without a clear cut advantage for either party. Silva and Struve have clear size advantages, but we know that there are many other intangibles (speed, skill and so on) that could dramatically change our presumptions on these fictitious bouts. It is my personal belief that Overeem may really be the only heavyweight that would be truly intimidating (pre-fight, at least) to Jones if he ever decides to make the leap.

That's not to discredit the other powerhouses of the heavyweight division. A quick rundown of some other (current) major players in the division:

Cain Velasquez: "Brown Pride" has the skill, but hardly measures up on paper at 6'1'' with a 77-inch reach and weighing in around 249-pounds.

Fabricio Werdum: Comparable to Jones but no real advantage at 6'4'' with a short 77-inch reach and weighing in at 246-pounds.

Junior dos Santos: The champion of the heavyweight division stands tall at 6'4'' but also sports the much shorter 77-inch reach. The scales for the Brazilian knockout artist only read 240-pounds!

Probably a good time to stress that this is (largely) only looking at physical measurements, but it clearly shows some very interesting numbers, namely the fact that "Bones" measures up quite well against every single heavyweight in the UFC.

What do you think, Maniacs? Should Jones move up to heavyweight? And if he does, who could stop him?