Was 2012 the best year ever for Asian mixed martial arts? Our own James Goyder breaks down the year that was with his "Best of" list right here.

Share All sharing options for: Asian MMA Awards: Who was tops in 2012? 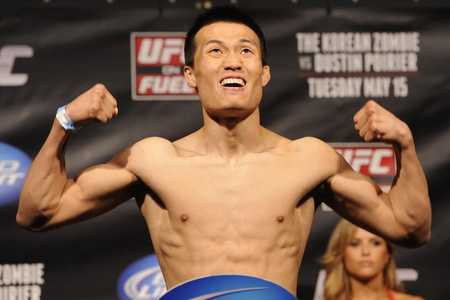 2012 was perhaps the most exciting year in the history of Asian MMA, and certainly the biggest since the ZUFFA buyout of PRIDE. The UFC signed up more Asian fighters than ever before, putting on shows in Macau and Tokyo while Singapore-based promotion ONE FC continued to expand with events in four different countries across the continent.

The year ended with a twist as DREAM was resurrected by GLORY in a move which will see the Japanese promotion put on its first event since New Year's Eve 2011 on December 31st this year. Both promotions are part of the ONE FC Network, a groundbreaking initiative which was launched in late 2011, and Shinya Aoki, Bibiano Fernandes, Phil Baroni and Melvin Manhoef were all 'borrowed' for the night.

Although Asian fighters have struggled to make the breakthrough from title contenders to actual belt holders in the UFC there are more and more coming close with Chan Jung Song likely to be the next in line and Hatsu Hioki surprisingly saying 'no' to a title shot.

The ONE FC champions are all Asian as both Kotetsu Boku and Soo Chul Kim stopped Brazilian fighters to claim belts and there is no shortage of up and coming local talent with plenty of hungry young fighters moving up the rankings and ready to challenge for titles in future years.

With so many fights, fighters and promotions to talk about picking award winners was not an easy process and I'm sure plenty of people will disagree with my selections so I have tried to explain them as clearly as possible.

Fighter of the year

The Japanese lightweight started the year with a submission victory over UFC veteran Shane Roller and proceeded to submit his next four opponents running up a 5-0 record in 2012 and booking himself a spot in the Road FC Lightweight Grand Prix final in the process.

The 27 year old, who also competes for Shooto and Pancrase, has submitted his last nine opponents and his career record currently stands at 13-1-4. His next fight is likely to be against Yui Chul Nam for the Road FC 155-pound belt and after that expect him to move on to the big leagues and sign with ONE FC, UFC or maybe even DREAM.

Selecting an Asian fighter of the year was much harder than I imagined it would be and so I will explain my thought process and go through some of the other contenders below...

Top pound-for-pound Asian fighters Yushin Okami and Shinya Aoki are all 2-1 in 2012 (Hatsu Hioki is 1-1) which rules them out while there are other fighters who could have been contenders, such as Chan Sung Jung, Jadamba Narantulalag and Bae Myoung Ho, who only managed to fit one fight in all year.

There were a few candidates in Japan where Pancrase pair Taichi Nakajima and Yuki Baba went 5-0 and 4-0 respectively while Keita Nakamura and Koichi Ishizuka both ran up 4-0 records in 2012. Korean Kyung Ho Kang deserves a mention, he went 3-1 for the year, winning the Road FC bantamweight Grand Prix and a UFC contract in the process.

Kyoji Horiguchi was 3-1 in the year with his only loss coming at the hands of Masakatsu Ueda and this Japanese bantamweight is believed to already be on the UFC radar. China's Jumabieke Tuexan went 4-0 in 2012 but needed a pair of split decision wins to do it and Chinese featherweight Wang Guan is another one who the UFC will be keeping an eye on, he went 3-0 in 2012.

Filipino featherweight Eric Kelly can reflect back on a good year's work after beating Bae Young Kwon, Brad Terrey and Jens Pulver while another Baguio based fighter, Mark Striegl, submitted six opponents out of six. Kotetsu Boku won two fights out of two and a ONE FC belt and Soo Chul Kim would definitely win the award for career comeback of the year after snapping a three fight losing streak to beat three tough opponents and become the first ever ONE FC bantamweight champion, with a 2012 record of 3-2.

Daisuke Nakamura also deserves a mention after going 3-0 for the year and winning the DEEP lightweight belt in the process. 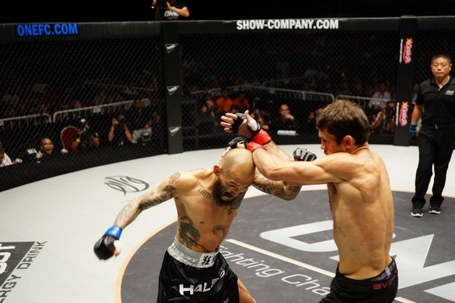 Fight of the year

Boku was brought in as a late replacement and was widely expected to lose to Moreira at ONE FC: 'Rise of Kings' in Singapore. The Brazilian has a huge height and reach advantage which he used to good effect in the opening two rounds and it seemed that the Japanese veteran was on the verge of being stopped as he found himself on the receiving end of a series of vicious leg kicks.

Going into round three it seemed a question of when, not if, Boku's left leg would give out but he stunned the crowd at the Singapore Indoor Stadium by landing a devastating overhand right which left 'Zoro' on wobbly legs and gave the referee no choice but to step in and stop the fight making the 35 year old the first ever ONE FC Lightweight World Champion.

Other contenders include Takanori Gomi's come from behind second round stoppage win over Eiji Mitsuoka (see the video here), Ole Laursen's split decision win over Eduard Folayang (see the video here) and Alex Niu's decision loss to Luke Jumeau. (Poirier vs Jung not considered for inclusion because it took place in an American promotion in the U.S.) 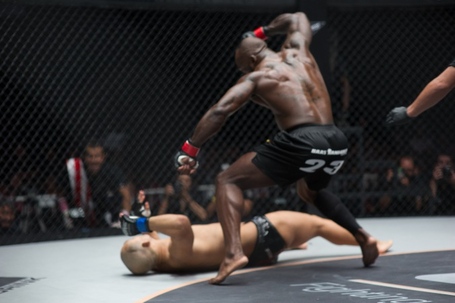 Knockout of the year

For the best part of a round, Ryo Kawamura frustrated both his opponent and the crowd by dancing around, refusing to engage and generally doing everything possible to avoid the Dutch kickboxer. With 20 seconds to go until the bell he got his comeuppance in a big way when he telegraphed a shot and Manhoef saw it coming, stepped back and unleashed a right hand which landed right on the button and rendered the Pancrase champion unconscious.

Issei Tamura's brutal KO of Zhang Tiequan was a close runner up (video here). Other contenders are Gianni Subba who stopped Bruce Loh with a brutal right hand-soccer kick combination (video here) and Crisanto Pitpitunge's KO of Justin Cruz who superman punched himself straight into a right hand, losing his PXC Bantamweight belt as a result (video here).

Submission of the year

Chan Sung Jung is currently providing the stiffest competition to Aoki's status as the number one submission specialist in Asia and in the main event of UFC on Fuel TV 3 he handed Dustin Poirier his first ever UFC loss with a brabo choke that left him unconscious on the canvass. 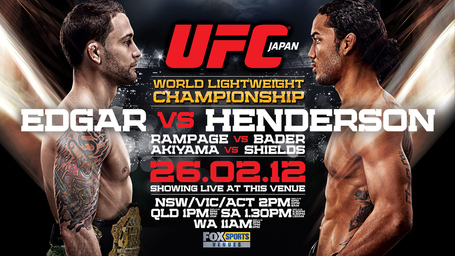 Show of the year

The main event, Benson Henderson vs Frankie Edgar, is a strong contender for 'Fight of the Year' at the World MMA Awards and the card also featured dramatic come from behind wins for Tim Boetsch and Takanori Gomi as well as memorable stoppage wins for Mark Hunt, Anthony Pettis, Vaughan Lee and Issei Tamura.

Throw in the fact that this was the UFC's first event in Japan for 12 years (which might explain why the card was so stacked) and attracted a crowd of something like 20,000 fans to the Saitama Super Arena and UFC 144 is definitely the Asian card of the year.

Other contenders include ONE FC: 'Rise of Kings' in Singapore which featured seven KO/TKOs and one submission, UFC on Fuel TV 6 in Macau when Cung Le knocked out Rich Franklin and ONE FC: 'Pride of a Nation' which was the biggest MMA event ever to take place in the Philippines and saw Filipino fighters Eric Kelly, Eduard Folayang and Honorio Banario register popular wins. 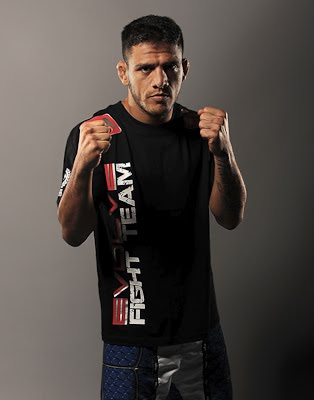 Camp of the year

Although Japan and Korea are still the countries with the most talent there has been a definite shift towards South East Asia with many top fighters from the West spending time training in places like Singapore and Thailand. Leading the way is Evolve MMA which this year has played host to Ryo Chonan, Satoru Kitaoka, Ben Askren, Rich Franklin and Dan Henderson among others.

Evolve MMA is continuing to raise the bar in terms of the quality of MMA training facilities in Asia and also gets credit for being a public facility which offers training to people of all levels and this institution has been an integral part of the incredible explosion of interest in MMA in Singapore.

Rafael Dos Anjos was the standout performer from the Evolve MMA Fight Team winning three UFC fights out of three to take himself back to the brink of title contention. Brazilian veteran Fabricio Monteiro made a successful comeback with a surprise win over DEEP champion Yuya Shirai while Zorobabel Moreira's soccer-kick KO over Roger Huerta will live long in the memory and Leandro Issa's decision victory over Masakatsu Imanari was the finest of his career.

There were disappointments as Eddie Ng was restricted to just one win due to a shoulder injury and Moreira and Issa fought themselves into ONE FC title contention only to fall short at the final hurdle while Shinya Aoki was stopped by Eddie Alvarez in their rematch, but Evolve MMA is continually setting the benchmark for coaching standards across the continent.

Other contenders are the X'ian Sports University where Vaughn Anderson was appointed MMA coach and fighters Jumabieke Tuexan and Wang Guan both had an undefeated 2012, Krazy Bee where Kotetsu Boku, Yusuke Yachi and Kyoji Koriguchi all had good years and Korean Top Team where neither Chan Sung Jung nor Hyun Gyu Lim lost a fight. 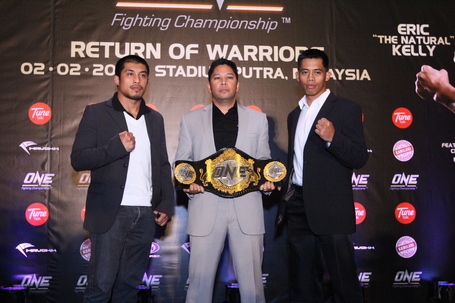 Promotion of the Year

ONE FC's status as the biggest promotion in Asian MMA was cemented in 2012 with five large scale shows being held in arenas in Jakarta, Singapore, Kuala Lumpur and Manila and all broadcast by ESPN Star Sports. Victor Cui's organization has shown an ability to move into new countries and put on sold out shows in the biggest available venues that only the UFC is currently able to match.

Marquee signings such as Shinya Aoki and Bibiano Fernandes turned down overtures from others to sign with ONE FC but it is the local fighters who have really shone with the likes of Eduard Folayang, Eric Kelly, Adam Kayoom, Eddie Ng and Peter Davis developing strong fan followings.

Other promotional contenders have fallen by the wayside with the Super Fight League scaled down dramatically and Legend FC on the lookout for a new venue. Road FC is expanding rapidly while the URCC is consolidating its status as the longest running promotion in South East Asia with a series of regional shows.

In Japan promotions like Deep, Shooto and Pancrase continue to survive and put on regular events but the most interesting development is Glory's acquisition of DREAM which should breath new life into the promotion initially formed to replace PRIDE.