Who is the baddest light heavyweight fighter not employed by UFC? We're about to find out when Bellator kicks off its 205-pound tournament on Jan. 17 via Spike TV. 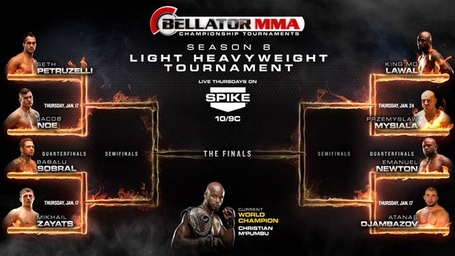 "At Bellator, there's never been a matchmaker sitting behind a desk in a shiny suit deciding who fights who for the title," said Bellator Chairman & CEO Bjorn Rebney. "The origin of Bellator was to provide a seamless connection between real sports competition and mixed martial arts, and I believe we have taken that to the next level with a true tournament bracket format."

The always colorful Seth Petruzelli returns to Bellator after a year away from the cage as "The Silverback" is looking to lock up his spot in the Bellator Tournament Semifinals with a victory over Tennessee's own Jacob Noe. Holding an impressive 10-1 record in his young MMA career, Noe collected an explosive TKO victory at Bellator 73 and will face the biggest test of his career when he battles Petruzelli on January 17th.

"There is a burning rage inside me ready to explode up out of me, and all over my opponent," Petruzelli said. "Jacob will be covered in my rage. If you're sitting in the front row be careful, because mo one is safe from my rage."

California's own "Hardcore Kid" Emanuel Newton will get another shot at tournament glory when he takes on Bulgaria's Atanas Djambazov. After falling to eventual Bellator Light Heavyweight Tournament Champion Attila Vegh in a close split decision, Newton is eager to get back inside the Bellator cage.

"Southern California has always been home to me, so to be fighting in Irvine under the Bellator banner is a huge honor for me," Newton said. "I love this organization, and to have another chance in the tournament is all I could ask for. I feel like I was robbed in my last fight, so this tournament is all about redemption for me. This is an incredibly tough division, and I'm ready for the challenge that starts January 17th on Spike."

The tournament will be rounded out by MMA superstar "King Mo" Lawal, who battles the dangerous Przemyslaw Mysiala on January 24th from WinStar World Casino.