Take a look at the UFC Heavyweight Champion Junior dos Santos as he stares down the man he took that very title from, Cain Velasquez, at today's (Dec. 27, 2012) UFC 155 pre-fight press conference in Las Vegas, Nevada.

Talk about a timid affair.

No juicy nuggets, no great sound bites, no memorable quotes. Just the normal pre-fight fluff and a podium giving way to a staredown, itself rather tame.

They usually are and that's always fine, especially in this case. Sure, the first fight saw a definitive finish when "Cigano" knocked the Cain Train off the rails in just 64 seconds back at UFC on Fox 1 late last year, but these are easily the two most talented heavyweights in the world and they're being given another five rounds to see if that first finish was a fluke.

I don't care who you are, it's going to be a good time. Velasquez looks ready for it, too: 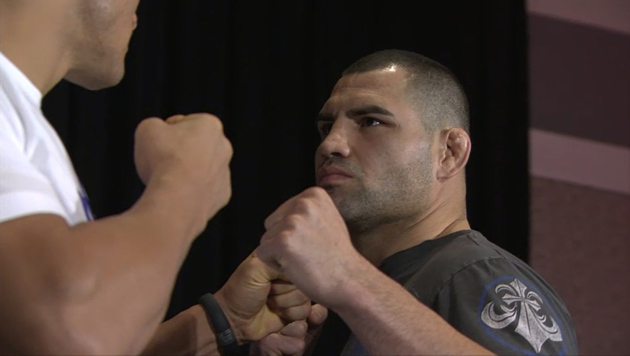 Are you ready? I know I am.

For complete notes and quotes -- what few there were, at least -- be sure to click here.

Remember, too, that MMAmania.com will provide LIVE round-by-round, blow-by-blow coverage of the UFC 155 main card action on fight night (Sat., Dec. 29, 2012), which is slated to air at 10 p.m. ET on pay-per-view (PPV). The latest quick updates of the live action will begin to flow earlier than that around 6:30 p.m. ET with the "Prelims" bouts on Facebook and FX Channel.

For all the latest "Dos Santos vs. Velasquez 2" news and notes click here.