UFC on FX 7 poster pic for 'Belfort vs Bisping' on Jan. 19 in Brazil

Here's a look at the poster for UFC on FX 7: "Belfort vs. Bisping" from the Ginasio Estadual Geraldo Jose de Almeida in Sao Paulo, Brazil, on Jan. 19, 2013, featuring Vitor Belfort vs. MIchael Bisping. Plus a whole lot more! Come see!

Share All sharing options for: UFC on FX 7 poster pic for 'Belfort vs Bisping' on Jan. 19 in Brazil 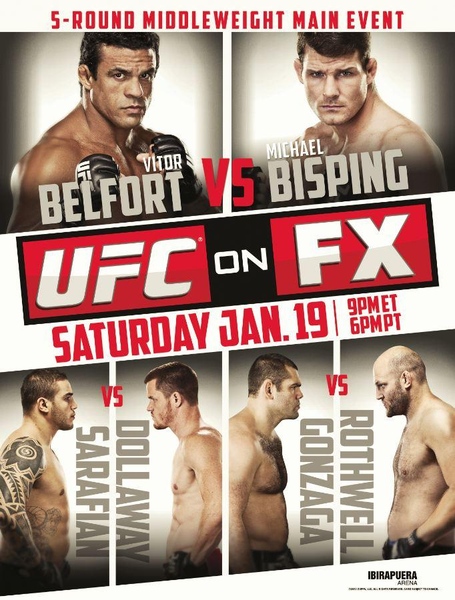 Two of the world's top middleweight fighters will collide when Vitor Belfort takes on Michael Bisping in the five-round headliner for UFC on FX 7: "Belfort vs. Bisping" from the Ginasio Estadual Geraldo Jose de Almeida in Sao Paulo, Brazil, on Jan. 19, 2013.

Belfort (21-10) recently took a break from his middleweight duties to accept a short notice fight against reigning UFC Light Heavyweight Champion Jon Jones at UFC 152. Despite some early drama, in which the Brazilian locked on a ligament-straining armbar, the former division titleholder couldn't seal the deal and eventually tapped to a fourth-round Kimura.

The ensuing loss sent him back to 185 pounds, where he's currently riding a two-fight win streak.

That's one more than Bisping, who rebounded from a close decision loss to Chael Sonnen earlier this year to out-point Brian Stann at last month's "Jones vs. Belfort" event in Toronto. "The Count" has been knocking on the championship door his entire career and a win over Vitor might finally be the reason it opens.

Assuming he doesn't get KTFO in the process.

Several other match ups have been announced for the upcoming fight card in Brazil, including C.B. Dollaway vs. Daniel Sarafian (middleweight), Gabriel Gonzaga vs. Ben Rothwell (heavyweight) and Khabib Nurmagomedov vs. Thiago Tavares (lightweight).

For the current UFC on FX 7 fight card and rumors click here. News, notes and other items of interest for "Belfort vs. Bisping" can be located here.