What do Henderson-Edgar, Fitch-Silva, Marquardt-Woodley, Jung-Poirier and Lauzon-Varner all have in common? They all combined to deliver some of the most memorable mixed martial arts (MMA) fights in 2012, which are all worthy of continued discussion and praise.

Just can't quit us, can you?

Finishes are all well and good, but in this, the third installment of MMAmania's "5 Top 5s," we're shifting gears and looking at the back-and-forth mixed martial arts (MMA) slugfests that kept us on the edge of our seats, prompted cold sweats as we silently begged the guy we bet on not to tap, leaving us on our feet and clapping until our hands hurt regardless of how much we hated the guy who won or loved the guy who lost.

That was a mouthful.

Follow me for a look at the Top 5 MMA fights in Ultimate Fighting Championship (UFC) and beyond in 2012 so far: 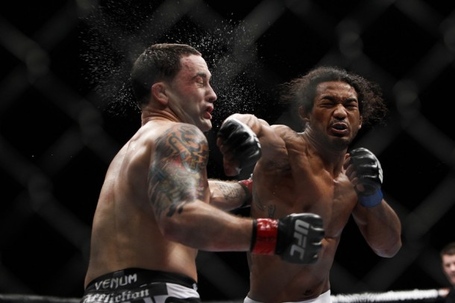 Neither man was considered the best finisher, but nobody in their right mind expected anything less than fireworks when UFC lightweight champion Frankie Edgar and former World Extreme Cagefighting (WEC) champion Ben Henderson locked horns at the Saitama Super Arena.

While Edgar's patented mix of high-volume boxing and rapid takedown attempts looked to carry the day early, everything changed when a Henderson upkick damn near sent Edgar's nose through the top of his head. The two continued trading heavy leather, Henderson tenderizing the champ's legs and body with big kicks, while Edgar worked away with punches, until the final bell, at which point Henderson was awarded the unanimous decision.

We can argue all day about who won this fight or who won the rematch, but it's hard to argue that this wasn't a fine piece of MMA. 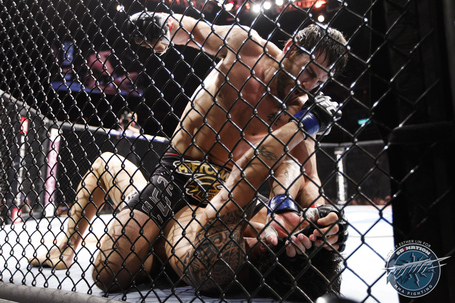 The last thing anyone expected as they celebrated the New Year on Jan. 1, 2012, was that one of the best fights of the year would involve Jon Fitch. The general consensus going into the bout between Fitch -- who was last seen making Dana White's day by getting knocked stiff in 12 seconds by Johny Hendricks -- and Erick Silva at UFC 153 was that Silva would either put him away in spectacular fashion or Fitch would drag him into a boring-ass grindfest.

None of the above, as it turns out.

Fitch, who was reportedly suffering from financial problems, came out like a house on fire, taking the fight to the dynamic striker from the get-go. Despite the former's wrestling prowess, Silva turned the tables in the second round, taking Fitch's back and threatening to be the first man in more than 10 years to submit him. Undaunted, Fitch survived the attack and nearly secured an armbar of his own before turning the third round into the Jon Fitch show, battering Silva post-to-post from top position and securing "Broke Fitch's" place among such legends as "Motivated BJ" and "Chuck with that Look in his Eye."

If Fitch keeps fighting like this, it'll get pretty hard to deny him a second go at Georges St. Pierre soon enough.

#3: Nate Marquardt vs. Tyron Woodley at Strikeforce: "Rockhold vs. Kennedy" 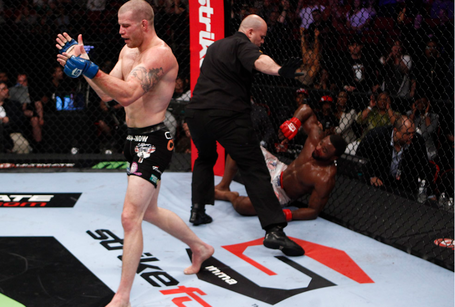 Tyron Woodley came into this fight on the heels of one of the year's worst fights, a split decision over Jordan Mein. Nate Marquardt had been released from the UFC after testing positive for elevated testosterone. Both men had a lot of work to do if they wanted a place in the limelight.

Luckily, they went at it with gratuitous gusto.

With their wrestling breaking even, the fight came down to Woodley's power versus Marquardt's technique. Marquardt went down in the first on a Woodley right, only to pop back up and put him down in turn. The two went tit-for-tat for the next two rounds, Marquardt pulling ahead only to get dropped once again by a right hand in the third. Things came to a violent halt in the fourth when, with Woodley pressed against the cage, Marquardt unloaded a vicious four-piece combo, slicing off a chunk of Woodley's lip with a pair of elbows and putting him to sleep with uppercuts.

An evenly-matched, technique-heavy fight with a fantastic finish. Not bad, boys. 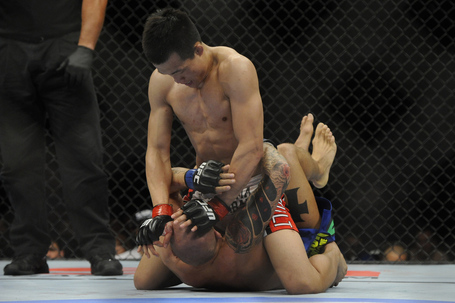 Despite a pair of jaw-dropping finishes following his first-ever knockout loss, the Korean Zombie came into his first headlining bout a sizable underdog against the streaking Dustin Poirier. Heedless of his opponent's size and strength, however, Jung showcased a brilliant mix of technique and berserk aggression, outgrappling and outstriking "The Diamond" over the first two rounds. The highlight of this period was a fantastic sequence in the second which saw Jung stun Poirier with a flying knee followed by a series of uppercuts, reverse a takedown attempt into full mount, and attack with an onslaught of armbars and triangles until the bell.

The tide seemed to turn in the third, when Poirier's southpaw straight starting landing at will on the fading Jung. Digging deep, the Korean Zombie refused to back down, rocking Poirier badly to start the fourth with an uppercut, landing a flying knee, and latching onto a fight-ending D'arce choke as the latter tried desperately to take him down, capping off both a brilliant fight and his own transition from novelty to contender. 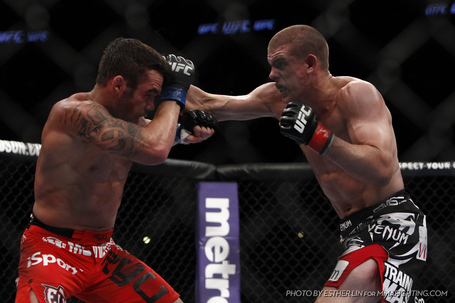 If you want an example of MMA at its best, look no further than this lightweight battle. This was perhaps the year's best mix of striking, wrestling and Brazilian jiu-jitsu, all executed with impeccable technique.

Varner's power showed itself early as he rocked Lauzon with heavy punches, only for Lauzon to establish grappling superiority in the second and take Varner's back, the two slugging all the while. Fatigued and nursing a broken hand, Varner over-committed to a blast double in the final frame, giving Lauzon the opportunity to lock up a triangle and take home two more fight night bonuses for his frankly ridiculous trophy case.

Any barnburners I missed? Let me know in the comments and don't forget to be an asshole about it. Also, don't forget to stop by later for the penultimate installment of "5 Top 5s," where we look at the top events of the year.