UFC 154 results recap from last night for 'St. Pierre vs Condit' in Montreal

The main event between Georges St. Pierre vs. Carlos Condit that headlined UFC 154 last night (Nov. 17, 2012) at the Bell Centre in Montreal, Quebec, Canada, had all the ingredients of an instant fight classic: Pressure, injuries, comebacks, titles, adversity, blood, drama and more. Controversy, fortunately, was not on the menu.

Share All sharing options for: UFC 154 results recap from last night for 'St. Pierre vs Condit' in Montreal

However, UFC 154 was far from ordinary ... about as far as it gets, actually.

Georges St. Pierre had all the pressure in the world on his shoulders, returning from an 18-month layoff because of a severe knee injury, in his own backyard and with a "super fight" looming with UFC Middleweight Champion Anderson Silva hanging in the balance.

"Rush" turned in a spirited effort last night, taking it to Carlos Condit in the early stages of their Welterweight title unification bout. He was aggressive, accurate and intelligent, landing good shots, controlling position and seemingly doing his best to honor pre-fight promises that he would take out "The Natural Born Killer" within the distance.

It was a bloodbath early, with Condit dripping crimson from his right eyebrow thanks to a short Canadian elbow up close.

Then, midway through the main event, it all changed.

St. Pierre caught a shin to the temple, which sent him backpedaling and then landed him on his rear, with Condit bearing down and, no doubt, with championship aspirations packed in his punches. St. Pierre weathered the storm, but he was not the same fighter from that point forward.

Indeed, he shifted into old school cruise control, setting up takedown after takedown with his striking. Punch, punch, shoot. Repeat. And repeat St. Pierre did for the final 2.5 rounds, riding a bucking Condit brilliantly en route to a very competitive unanimous decision.

It's really hard to find fault in St. Pierre's performance. It was flawless for the most part with the exception of the head kick, which is saying quite a lot with the pressure, nerves, ring rust, surgically-repaired knee and all the other intangibles that followed him into the Octagon last night.

Yes, a finish would have been nice, but a bloody war -- recovering from adversity outside and inside the cage -- is just as sweet. In fact, I'd call for a rematch in the near future if that "super fight" with the "Spider" wasn't looming on the horizon.

Oh, and because of a guy named Johny Hendricks, too. 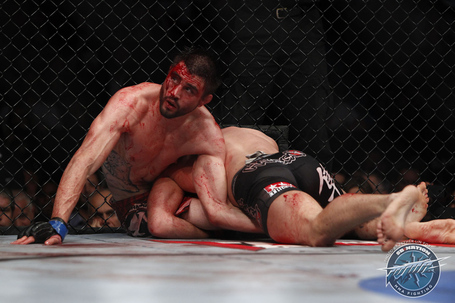 In the co-featured fight of the night, Hendricks collided with Martin Kampmann , a booking that for all intents and purposes should have been to establish a clear-cut number one Welterweight contender. Unfortunately, with the pre-event brouhaha focused on that "super fight" between Silva and St. Pierre instead, such a pivotal divisional match up felt pointless.

The good news is "Big Rig" did what he had to do to make it right.

And he only needed 46 seconds to do it, landing a blistering straight left that set "Hitman" stiff, collapsing lifeless to the floor in an unconscious heap of flesh. Just in case there was any doubt that Kampmann was half-dead (he is, you know, quite a resilient pest), Hendricks followed up with a gratuitous, and needless, face smash that sent the referee into panic mode.

It was an incredible finish. One that Hendricks needed after a somewhat controversial decision win over Josh Koscheck in his previous performance, reminding fight fans -- and hopefully UFC President Dana White -- that he is a lethal force to be reckoned with in the talent-laden division. 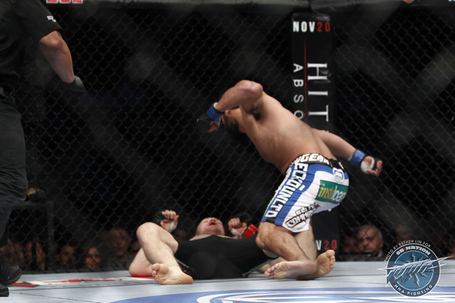 Francis Carmont came steaming into his Middleweight showdown with Tom Lawlor on an eight-fight win streak, the three most recent of which were registered under the prestigious UFC flag. "Limitless" leveraged his size and power to hurt his last two opponents in the stand up game and then put them out of their respective miseries with slick submissions.

How does one stop a runaway freight train? You get up close and "Filthy."

Lawlor was able to close the distance and stay out of pain range, tying up Carmont at every opportunity and taking him to the mat to work some submissions of his own. In fact, at the end of the first and seconds rounds, Lawlor had his arms wrapped around Carmont's throat, threatening to end the bout on separate occasions with similar guillotine chokes.

Unfortunately for Lawlor, however, finishing those chokes was the difference between winning and losing. He didn't finish them and, in the process, dropped a very unpopular split decision to his Canadian counterpart.

That's right, the fan-friendly hometown crowd booed one of its own, Carmont, and the judges' decision. It's hard to blame them: Lawlor fought a very smart (and ugly) fight and was closer on more than one occasion to decisively ending it, which is much more than Carmont can say for himself. 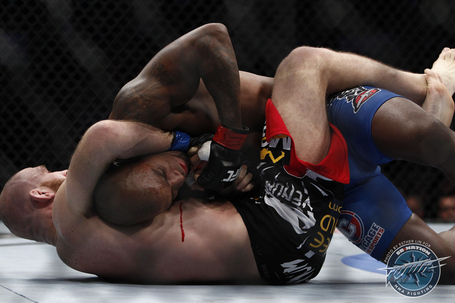 In case you were unaware, the 185-pound scrap between Constantinos Philippou vs. Nick Ring was canceled early yesterday because "Promise" came down with a last-minute illness. In its place, the Lightweight bout between Mark Bocek vs. Rafael dos Anjos was inserted on the televised pay-per-view (PPV) main card.

Dos Anjos won a dominant three-round, ho-hum unanimous decision. And I don't really feel the need to spend any more time on it than that. 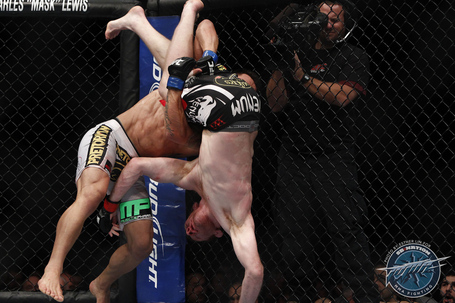 More than a few brows furrowed when the Featherweight showdown between Mark Hominick vs. Pablo Garza was included on the PPV main card. Sure, Hominick is a former number one division contender and he is Canadian, but even still, both men were riding two-fight losing streaks.

So much for rewarding (only) winning behavior.

Nonetheless, "The Scarecrow" and "The Machine" put on quite the entertaining scrap even though The Ultimate Fighter (TUF) 12 alum was about half-foot taller and considerably longer than than hometown favorite. However, it didn't seem to matter much because a majority of the 15-minute, 145-bout was spent horizontal, which is where size really doesn't matter.

In the early going, Hominick adeptly averted an armbar crisis to later land a thundering body blow that doubled over Garza almost immediately. Smelling blood in the water, Hominick pounced almost immediately, ripping more body punches to the affected area with the thought that he could force a midsection stoppage.

Garza apparently wasn't liver-ed out, however, rising to his feet shortly thereafter and clipping Hominick with a skin-splitting upper cut that immediately put an end to his onslaught.

The bell rang and the pair would return for two more rounds of action, going back-and-forth for the remaining 10 minutes, but it was nowhere near as close as the opening frame. Garza eventually began to dictate the pace, implement his gameplan and wear down Hominick en route to a convincing unanimous decision.

Not really sure where either fighter goes from here. Garza obviously lives to see another day inside the Octagon and so, too, will Hominick most likely. Unfortunately, he just has not been the same since the tragic death of his trainer and brother-in-law, Shawn Tompkins, last year and the stunning seven-second knockout loss to Chan-Sung Jung.

And there's no telling if he will ever return to fine form at this rate. 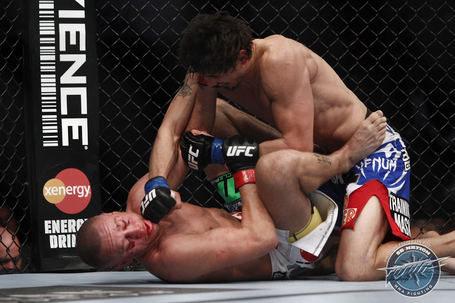 That's enough from us. Now it's your turn to discuss UFC 154: "St. Pierre vs. Condit" in the comments section below.

Did St. Pierre miss the boat on calling out Silva? Should he fight Hendricks, perhaps his last remaining challenge in the division, get a shot first? Was Lawlor robbed? Can Hominick somehow find a way to get back to his winning ways?

Be sure to also check out our complete UFC 154 blow-by-blow coverage of the entire "St. Pierre vs. Condit" event right here. And for a detailed recap of the UFC 154 "Prelims" bouts on Facebook/FX click here.

UFC 154 results, recaps, videos and more for 'St. Pierre vs Condit' on Nov. 17 in Montreal