Get a head-to-toe breakdown of undefeated heavyweight Travis Browne prior to his main event fight against Bigfoot Silva at UFC on FX 5 tonight in Minnesota.

Here's how to watch it.

The 30-year-old Hawaiian began fighting along the west coast in 2009, quickly acquiring a 9-0 record with eight finishes. Since joining the ranks of UFC, Browne has upheld his spotless record and finished three more opponents inside the first round.

Weighing around 250 pounds on fight night, Browne is shockingly agile but still packs huge power. "Hapa" has been on the fringe of the top 10 for awhile now, and looks to be regarded as a serious contender with a dominant victory over "Bigfoot".

In this breakdown, I'll find out if Browne has the skills to run through Silva and continue his quest for UFC gold.

Browne's style of striking is quite unique and won't be found at any traditional martial arts school. Instead of lumbering forward throwing haymakers, as many of the extra large heavyweights do, "Hapa" uses his extreme agility to run circles around his opponent. He also uses his footwork and head movement to avoid punches just as much uses it to go on the offensive.

His combinations start from outside the kicking range. After utilizing a ton of lateral movement, Browne leaps forward with an uppercut or hook and follows up with two or three more. He even mixes in the occasional flying knee. If this sounds familiar, it's because the big man strikes a lot like Benavidez. Browne's boxing style isn't out of the ordinary for a lighter weight fighter, but for a heavyweight, this is very unique.

In addition to his lunging hooks, Browne loves to throw running kicks. When he charges at his opponent, the smart ones try to circle away instead of trading blows. When they circle, the Hawaiian cuts an angle quickly and delivers a hard leg, body, or head kick. He also likes to end his combinations with kicks, which make them very hard to counter.

The final element of Browne's striking is his knees from the clinch. Whenever he can, Travis latches onto his opponent's neck and throws knees in rapid succession to the head and body. His aggression in this position allows him to land four or five knees before his opponent can break away. Against Mychal Clark in Bellator, Browne was able to land 11 straight knees to the midsection before Clarke could escape.

While Browne never wrestled in high school or college, his takedowns have been very effective throughout his MMA career. His takedown defense has also been impenetrable. Despite his aggressive forward motion, "Hapa" has never been taken down in the UFC.

Browne mixes his takedowns into his striking combos very well. For example, against Clark Travis, he threw a vicious head kick and then shot for a double leg while his opponent was still covered up. After getting a solid grip, he drives forward while turning to his right to finish the takedown.

Browne has also shown very good takedowns coming from the clinch. Once he successfully gets an under hook, he hooks a leg and spins for a takedown or simply throws them through the air. In his fight with Cheick Kongo, Browne threw Kongo around from the clinch in the first round, which is generally the Parisian's game plan.

While no one has been able to take Travis down, Kongo successfully shut Browne's offense down by grinding him in the clinch. If Kongo hadn't been so fascinated with Browne's shorts, he would have won by unanimous decision.

Browne has a purple belt in Brazilian Jiu-Jitsu (BJJ) and currently trains under Lloyd Irvin. While we have never seen him work off his back, he did show sound defense when defending an anaconda choke from Struve.

From the top position, Browne is aggressive with his guard passing. While he generally prefers to drop brutal ground and pound from dominant positions like mount, Travis has also shown that he can submit people. After rocking Chad Griggs with a beautiful double flying knee, he latched onto a clinch and threw him to the ground.

Browne next passed half guard directly into mount. When Griggs turned away, Travis grabbed his neck and outstretched limb for the arm triangle choke. Quickly hopping to side control, "Hapa" finished the move for his first "Submission of the Night" award. 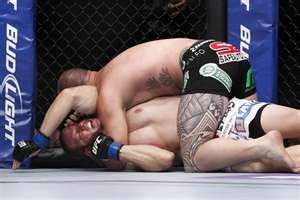 Browne is one of the largest 265-pounders in the UFC, yet he moves like a middleweight. He puts more emphasis on his footwork than any other heavyweight, enabling him to switch between his striking and wrestling very well. He transitions between attacks faster than his opponent can defend, allowing him to overwhelm their defenses and finish the fight.

Despite his athleticism, Browne's Achilles heel is his cardio. In his fight with journeyman heavyweight Rob Broughton, Travis slowed down after the first round. Even though he was vastly more skilled in every area, the Hawaiian was so tired that Broughton could keep up with him and even threaten with a Kimura. To win that fight Browne had to resort to laying on his foe. Browne's cardio deficiency also appeared against Kongo, where he easily won the first round, but slowed down enough for Kongo to win the final two.

Does Browne have what it takes to destroy "Bigfoot" and ascend into the ranks of the elite or will Silva stain his undefeated record and make a statement of his own?

Find out tonight in our live results and play-by-play thread right here!