Get a head-to-toe breakdown of the only "Bigfoot" fighter in the UFC, Antonio Silva, prior to his main event fight against Travis Browne at UFC on FX 5 this weekend in Minnesota.

Known for his gigantic size, "Bigfoot" had an extremely successful Elite XC career, which he followed up with a respectable (3-2) run in Strikeforce. While with Strikeforce, Silva notched his career defining win over mixed martial arts (MMA) legend and former Pride FC heavyweight champion Fedor Emelianenko.

Since then he has hit a rough patch, suffering first round knockout losses to American Kickboxing Academy heavyweights Daniel Cormier in Strikeforce and then Cain Velasquez in his UFC debut. A black belt in Karate, Judo and Brazilian jiu-jitsu, Silva enforces his diverse skill set with immense physical strength and an 83-inch reach. Silva hopes to bully Browne around the cage and get back to his winning ways.

Does Silva have the skills to pull of an upset against Browne?

(Big shout out and thanks to .GIF master Zombie Prophet for supplying the .GIFs below.)

Despite having a karate base, Silva's striking is mostly based on his boxing. Utilizing a basic one-two combination, Silva is able to keep his opponents at the end of his long reach. Whenever his opponent begins to cover up to hide from the jab, Silva explodes forward into a stepping knee. Once he finds his range or smells blood, he'll attack with a charging flurry of looping left and right hooks.

Despite its lack of complexity, Silva's striking packs so much power that his opponents are forced to respect it.

Silva also uses his long range to counter his opponent. After landing jabs, leg and body kicks from range, his opponents have a habit of charging forward. When they get too aggressive, Silva throws a right cross. Because of his long reach, Silva's punch lands first and often crumples his opponent.

The most effective element of Silva's striking game is his clinch work. From the Muay Thai clinch, Silva muscles his opponents' heads down while throwing hard knees to their faces. In addition to his knees, Silva throws violent uppercuts and elbows or steps away and tees off with hooks. 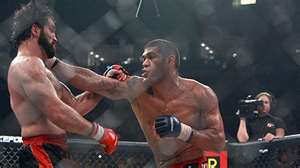 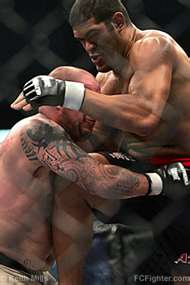 Silva's striking is not without weakness.Silva is probably the biggest overall heavyweight in MMA right now, which means he isn't nearly as quick and agile as some of his smaller opponents His head is extremely large, yet he doesn't move it at all. When "Bigfoot" doesn't keep his hands up, this over sized target gets even larger. Against Mike Kyle, this got him in serious trouble. Against top contender Daniel Cormier, this got him finished.

Antonio Silva's takedowns, much like his striking, are quite basic. Despite this, they have led to many of his MMA victories. Nearly all of Silva's technical knockout victories come from his brutal ground and pound, including his Strikeforce victories over Fedor and Kyle. From the top position, Silva rains down a constant flurry of hammer fists and hooks.

A Judo black belt, Silva uses his strength to grind his opponents against the cage and gas them out. After wearing them down, he attempts a trip or drops down for a single leg takedown. The ability to slow down his opponents is especially effective in the heavyweight division, where cardio is always in question.

Silva's preferred takedown is to wait until his opponent pushes forward then dive forward for a double leg takedown. As his opponent rushes forward, Silva changes level and drives forward. An excellent example of this is his fight with Fedor. After a fairly even first round, "Bigfoot" ducked a telegraphed overhand right. After latching onto Emelianenko, he drove through and completed the double leg takedown.

Silva received his black belt from the Nogueira brothers. Training with American Top Team and Imperial Athletics, Silva's jiu-jitsu is constantly being watched by extremely experienced ground fighters. Once the fight hits the mat, Silva generally uses his jiu-jitsu to control his opponent from the top position and dominate them with ground and pound. On a couple rare occasions, Silva has used his jiu-jitsu to finish fights.

Antonio has also demonstrated a solid jiu-jitsu game off of his back. Against Fabricio Werdum, "Bigfoot" was put in some bad positions. Werdum had his back at one point, and had top position multiple times, but was unable to finish Silva as he calmly worked his way back to his feet. 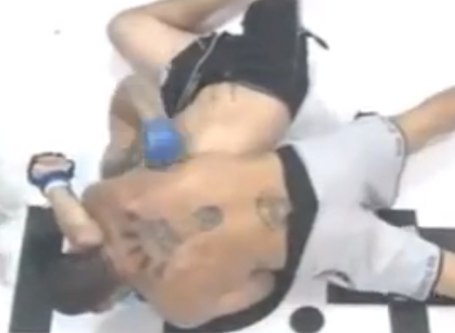 Almost every aspect of Silva's game relies on his absurd strength. Cutting from 285 pounds, Silva averages about a 40 pound weight advantage over his opponents. Even though he cuts weight and is larger than most of his opponents, he often holds the cardio advantage, too.

Silva's strength presents another problem for his opponent. He is so strong that clinching with him is out of the question, yet his long jabs and straight rights make it difficult to land at range without getting picked apart and countered. The solution to this dilemma is not to rush Silva either, as this leads to his takedowns and ferocious ground and pound.

Against Browne, Silva will face what has proven to be his weakness: Quick, powerful strikers. Will he be able to muscle "Hapa" to the ground and brutalize him, or will the Hawaiian put Silva's UFC career at risk with another knockout loss?