Matt Riddle and Francisco Rivera both looked impressive in victory at UFC 149 but now that the smoke has settled from the event in Calgary, the Commission has overturned both wins thanks to failed drug tests.

The smoke has cleared from UFC 149: "Faber vs. Barao" back on July 21, 2012, in Calgary, Alberta, Canada, and two pretty victories have turned into two ugly No Contests.

Both Matt Riddle and Francisco Rivera failed their drug tests, the former testing positive for marijuana while the latter was popped for "an undisclosed over-the-counter stimulant." Both men received 90-day suspensions (that are both already up) and now the Calgary Athletic Commission has confimed (via MMA Weekly) that both men will have their victories overturned because of their infractions.

Riddle was most impressive in his victory, a "Submission of the Night" winning performance over Chris Clements. Rivera, meanwhile, knocked out Roland Delorme in the opening frame of their featherweight fracas.

Both have gone up in smoke.

For his part, Riddle is trying to save face by taking to Twitter to post a picture of his medical marijuana card, complete with all his information, including his home address. 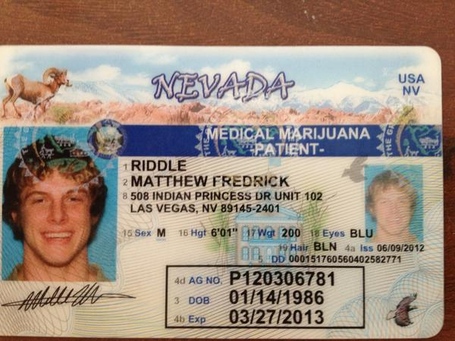 It should be noted, he claimed later he has since moved to a new residence in Las Vegas.

To catch up on all the action from UFC 149 be sure to head over to our results thread here. For a closer examination of the Riddle and Rivera fights click here and here.