Best of the Rest: Old School and New School Collide at Shooto's 2012 Debut

Share All sharing options for: Best of the Rest: Old School and New School Collide at Shooto's 2012 Debut

Created in 1985 by the legendary "Tiger Mask," Shooto has been merrily chugging along despite the rise and fall of such Japanese mixed martial arts (MMA) organizations as PRIDE and Sengoku.

Throughout its storied history, Shooto has produced some of the finest lower-weight fighters MMA has ever seen, including Takanori Gomi, Tatsuya Kawajiri, Rumina Sato, Hatsu Hioki, and flyweight standouts Shinichi "BJ" Kojima and Mamoru Yamaguchi.

Even with Japanese MMA on an obvious decline, Shooto has continued to produce outstanding fights and this Sunday's "Survivor Tournament Final" is no different, featuring the highest-ranked bantamweight outside the ZUFFA umbrella taking on one of the brightest prospects in the "Land of the Rising Sun."

Join us after the jump for a closer look at Masakatsu Ueda vs. Kyoji Horiguchi. 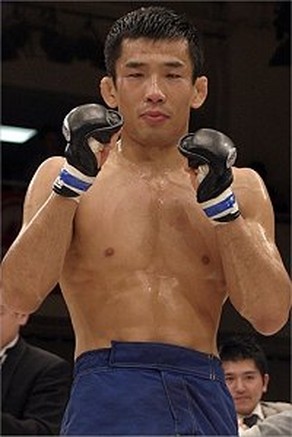 Universally considered a top-10 bantamweight, Ueda fights out of Paraestra under Yuki Nakai, a gym famous for housing Shinya Aoki. Ueda is a former combat wrestling champion, holding a win over the legendary KID Yamamoto in collegiate wrestling (who just happens to be his opponent's teammate and senior).

Ueda has parlayed that grappling prowess into MMA success; in seventeen bouts, his sole loss, which cost him his title, was the result of a crazy, never-before-seen "ninja choke" from rubber-guardin' grappler Shuichiro Katsumura, seen below.

Since that loss, Ueda has rattled off four straight, including a TKO of Rumina Sato and a clear-cut decision over Royler Gracie in a bout that saw Ueda fighting two weight classes higher than normal.

As stated before, Ueda is an expert combat wrestler; he excels at the single-leg takedown and stifling top control, which allowed him to hand Bellator tournament winner and current number-one bantamweight contender Eduardo Dantas the first and only loss on his record. Aside from the Katsumura shocker, his submission defense is generally nigh-impregnable, and with his takedown prowess, it's a rare fighter that won't find himself entirely stifled by Ueda's grappling.

On his feet, Ueda is serviceable; he relies mostly on his hard left kicks, particularly the middle kick that dropped Sato and led to the finish. So far, it has proven sufficient to open up his takedown game despite its limitations, and nobody has yet managed to take full advantage of it. 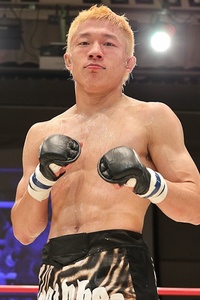 Unbeaten at the age of 21, Horiguchi won by decision in his MMA debut and immediately decided that he'd rather not do so again. He is currently sitting pretty on five consecutive knockouts, including a brutal punch stoppage of veteran Seiji Akao to capture the 2010 Shooto Rookie title in only his third bout. Horiguchi fought three times in 2010, scoring an impressive finish each time out.

Horiguchi trains out of the Norifumi Yamamoto-led Krazy Bee and has been dubbed by many as "KID 2.0," and while it may be a bit early to trump him as such, he's sure looked the part. Kyoji is blisteringly fast, bouncing around on the outside with hard leg kicks to set up his powerful straight punches. His ground-and-pound has likewise impressed; despite looking small even by bantamweight standards, Kyoji has some real pop in his hands.

Why You Should Care: Ueda, along with former DEEP champion "Iron" Nakamura, were recently added to Bellator's incredibly stacked 2012 bantamweight tournament, and as stated before, he is universally recognized as a top-ten fighter at that weight. Horiguchi, despite being only 21, shows incredible potential, and with the UFC's newly-added 125-pound division (and the fact that they just signed Shooto flyweight champ Yasuhiro Urushitani), you'll likely be seeing him under the ZUFFA umbrella at one weight or another.

Who Takes It: Horiguchi could very well be a genuine superstar before long, but this seems to me just a bit too much too soon for the Krazy Bee prodigy, and while it wouldn't surprise me to see him rock Ueda at some point, the latter's experience and takedown prowess should prove just a bit too much for him at this point.

There doesn't seem to be a way to watch this one live, but keep an eye out for videos sometime next week.

JMMA may be on the decline, but there's some life in this old girl yet.