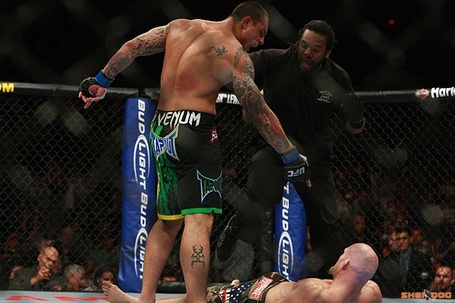 UFC light heavyweight Thiago Silva has served his one year suspension for failing his drug test prior to his win over Brandon Vera at UFC 125 on Jan. 1, 2011.

Silva popped positive for a prescription steroid that his doctor administered via epidural to his back injury that he has suffered with over the last couple years. Silva admitted to the NSAC that he knew he was violating their rules but felt he needed to do so in order to support his family. He was fined $33,750 and suspended for one year.

He has only fought twice in two years due to injury and suspension.

When reached for comment, NSAC Executive Director Keith Kizer informed MMAmania.com that Silva's license was revoked, not suspended, and he can now reapply for a 2012 fight license anywhere. In Nevada, though, he will "need to appear on an agenda for a licensure."

You ready to bring the Brazilian banger back to the UFC? Who would you like to see welcome him in his return to the Octagon? A handy-dandy poll with a few worthy contenders after the jump.

Who would you like to see welcome Thiago Silva back to the 205-poun division?