But was it really deserved?

Despite the bout having just taken place no more than a few hours ago, it's already the subject of great debate on forums and in social media circles. One faction feels as though Sonnen did enough with his takedowns and high volume to earn the points necessary to win. The other thinks Bisping negated his Sonnen's wrestling and was superior striking, seemingly outlanding his opponent in strikes.

The judges make the final decision -- and they've already rendered their verdict -- but that doesn't mean we can't analyze the numbers provided by the fine folks at Fight Metric.

Let's look at who did the best, at least as far as statistics go: 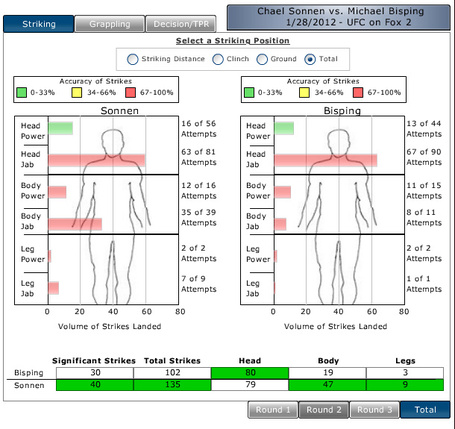 As you can see here, in a bit of a surprise, Sonnen actually outlanded Bisping in both total strikes (135-102) and significant strikes (40-30). The only area "The Count" had the advantage was in head strikes, in which he landed one more (80-79).

The round-by-round breakdown can be seen by going over to Fight Metric but it also shows a 2 to 1 advantage for Sonnen for the first and third rounds.

How about the grappling report: 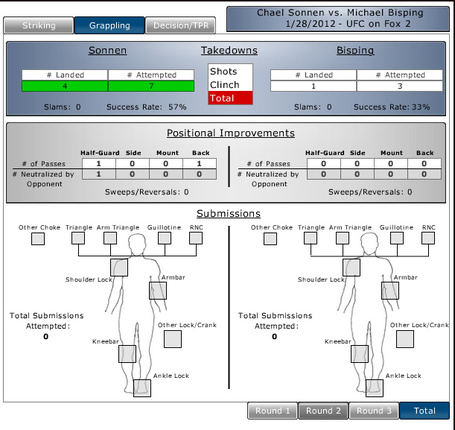 Here, Sonnen gets credit for four takedowns on seven attempts, including one pass to half-guard and one to Bisping's back. I'm not entirely sure why he didn't get credit for taking full mount the way he did in the third but nonetheless, he has the clear edge in the grappling department, considering the Brit was only successful on one takedown. 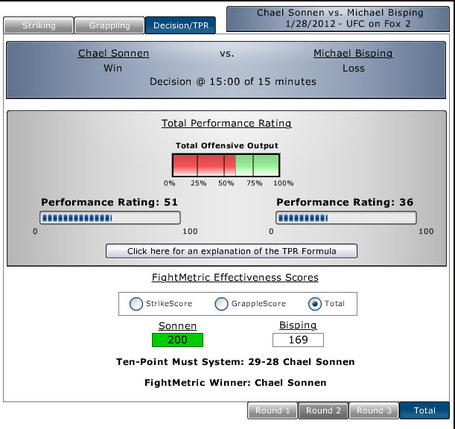 As per the effectiveness score and performance rating, Sonnen was the rightful winner (statistically speaking) with a 29-28 score. It was close but the judges got it right.

These numbers change anyone's mind about the fight?

To read a full recap of the Chael Sonnen vs. Michael Bisping fight click here. For complete UFC on FOX 2 results and blow-by-blow coverage of all the night's action click here.