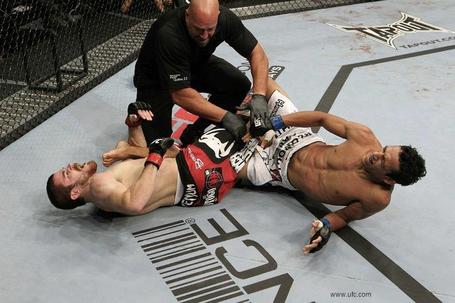 Since his addition to the Ultimate Fighting Championship (UFC) roster back in October of 2008, Jim Miller has compiled an impressive nine wins, including three by submission, against only two losses. Those two defeats came by decision to Gray Maynard and Ben Henderson. One is a former two-time title challenger, the other is the current number one contender.

Oh, and by the way, the only other loss on his record is to some guy named Frankie Edgar.

With Miller facing off against Melvin Guillard this Friday night (Jan. 20, 2012) in the main event of UFC on FX, for what may be the next number one contender spot, I wanted to break down the most potent weapon for his attack against "The Young Assassin."

We'll start with his brilliant kneebar finish at UFC 124, one that derailed a talented young up-and-comer and established Miller as one of the most dangerous opponents in the world at 155-pounds.

As Miller approached his Dec. 2010 bout against Charles Oliveira, the hype train was moving full steam ahead with "Do Bronx" as its VIP passenger, and for good reason. The young Brazilian had displayed a very dangerous submission game, along with some very technical striking in his previous UFC performances. In an interview leading up to the fight, Charles had even stated he didn't think Miller would be able to compete with him at all when it came to the grappling game.

Props to Zombie Prophet for the .gifs. Check out his site at www.ironforgesiron.com for .gifs and videos. Find them posted there before anywhere else on the 'net!

Miller switching to the single leg takedown means he is more likely to land in Oliveira's half guard (which he does, as shown in the .gif) instead of his full guard. Defending the guillotine is easier when you are only stuck in half guard. Once Miller gets Oliveira on his back, Miller immediately passes his legs to the side of Oliveira's body which is opposite the side Charles has the choke locked up on, ending up in "cross-side" position. Miller is now safe from the choke, as it is next to impossible for "Do Bronx" to create the necessary torque to finish the submission when Jim is in cross-side.

The above clip starts with further evidence that Miller is confident in his ground skills, demonstrated by the way he willingly dives into the guard of Oliveira, who retaliates by immediately using his dangerous jiu-jitsu game to attack the left leg of Miller. Charles tries to wrap both of his legs around Miller's leg, which would be the beginning of a leg lock.

Miller, knowing his leg is in danger, wisely keeps his left arm inside the guard of Oliveira, which prevents "Do Bronx" from completely isolating and attacking his leg. As Oliveira adjusts his guard, Miller does two things at once, lightning fast: He spins to his right, pulling his left leg far enough out of Oliveira's guard to be safe from the kneebar, while at the same time grabbing on to Oliveira's left leg with both his arms and holding it tight to his chest.

Miller then drops down to the mat, sliding his hips down Oliveira's leg bringing his opponent's knee past his own hips. Now, "Do Bronx" is in trouble. Jim keeps Charles' leg tight to his chest, squeezes his knees together, and drives his hips forward, putting very intense pressure on the knee joint of Oliveira. This forces the tap from Charles, and chalks up a very impressive win for Miller.

Just three months after his victory over Oliveira at UFC 124, Miller would face another ground specialist. This time an excellent wrestler in Kamal Shalorus at UFC 128. While Miller would end up finishing Shalorus via technical knockout (via strikes) in the third round, he still found time to display some very slick jiu-jitsu.

In the clip above, Miller changes levels, avoiding the strikes of Shalorus, and latches on to Kamal's lead leg. Miller successfully executes the single-leg take down, and Kamal immediately tries to buck Miller. Jim uses this opportunity to "surf" Shalorus. He goes with the flow, maintaining his top position and letting Kamal move around underneath him, almost like a surfer riding a wave. The concept seems simple, but Miller shows the true experience and composure of a high level jiu-jitsu practitioner by letting Shalorus tighten his own noose.

Taking advantage of Kamal's failed buck-and-roll attempt, Miller immediately lands on Shalorus's back, slides his legs inside Kamal's thighs. This is called "setting the hooks." At the same time he sets his hooks, Miller wraps his left arm around Kamal's neck, and slides his right arm under Kamal's right arm, threatening him with a choke.

This position has Kamal in a lot of trouble. Miller can finish the fight here with a rear-naked choke. Instead of just settling for that position, Jim decides to take things one step further. Wrapping his right leg around the stomach of Kamal Shalorus, he hooks his right foot under his left knee and squeezes, thus locking in the "body triangle." This makes it very difficult for Kamal to breathe, and is very painful on his back and spine.

While Miller did not finish Shalorus from this position, he certainly showed Kamal that spending time on the ground with him would be a very risky move to make. Anyone unlucky enough to find themselves on the mat with Jim Miller had better be prepared to deal with a competitor who is willing and able to finish the fight at any moment.

Are you listening, Melvin Guillard?

For more on their main event match-up click here.