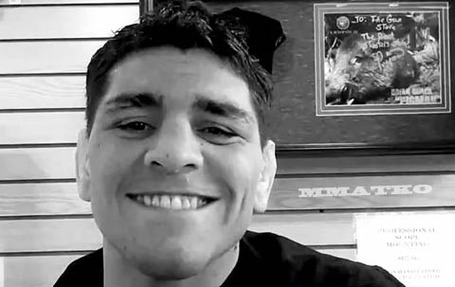 Nick Diaz is back. For now.

The former Strikeforce welterweight champion, who was pulled from his main event fight opposite Georges St. Pierre just yesterday, has been re-inserted into the UFC 137 line up to take on B.J. Penn at the Mandalay Bay Events Center in Las Vegas, Nevada, on Oct. 29, 2011.

Diaz disappeared earlier this week, missing several mandatory press events to promote his upcoming clash with the Canadian. His absence, as well as inability to communicate his whereabouts -- even to his right-hand man and trusted trainer, Cesar Gracie -- compelled White to switch gears.

Carlos Condit was unexpectedly tapped to replace Diaz, which left the Hawaiian temporarily without an opponent.

It didn't last long. In fact, it was a deal Penn could not refuse.

Diaz, just 24 hours removed from his public spanking, has been "punished" with a co main event slot against "The Prodigy." It is certainly a far cry from being released, which was certainly an option that White had to consider based on Diaz's bizarre behavior.

Perhaps he got the message, grew up or offered another sideways apology. On the other hand, perhaps White feels he may have overreacted after finally speaking with the Stockton slugger.

UFC 137 features a re-worked main event between St. Pierre and Condit. In addition to the Penn-Diaz co-featured fight of the night, two heavyweight clashes -- Roy Nelson vs. Mirko Filipovic and Cheick Kongo vs. Matt Mitrione -- are also scheduled for the main card pay-per-view (PPV).

For the latest UFC 137 news, notes and rumors check out our comprehensive archive right here.