Share All sharing options for: Nick Diaz out of UFC 137 main event but hasn't been cut by UFC ... yet 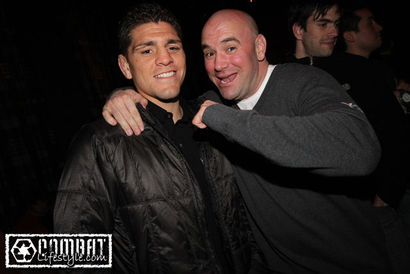 When news broke just a short while ago that Nick Diaz had been removed from his scheduled main event fight at UFC 137 on Oct. 29 in Las Vegas against Georges St. Pierre due to no-showing press conferences, talk quickly turned to whether or not that meant he was cut from the promotion altogether.

So far, the answer to that question is no.

That's according to promotion President Dana White, who talked about how upset he is at the situation today at the event press conference but also said he's yet to make any concrete decisions regarding the future of Diaz, who just signed a multi-fight contract not long ago.

However, if his comments later on in the presser are any indication, it looks like Diaz's days back with the UFC may be over before they even got a chance to restart:

"I would have to assume that, yes, we're probably going to let him go, but we'll see what happens."

If Diaz does, in fact, end up getting cut from the promotion, will that be taking it a bit too far, considering how little everyone knows on the situation?

To that end, anyone got an idea as to what exactly is going on here?