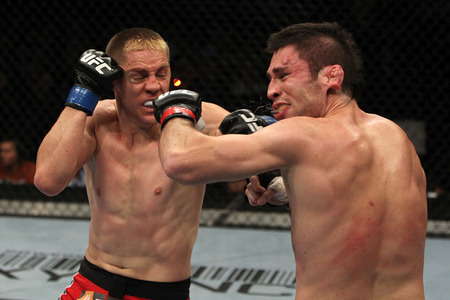 The most dangerous place to stand when fighting within the eight walls of the Octagon is inside the "pocket."

It is a place where both fighters are in range to hit each other and it is a place that makes power shots much more significant. You can produce blistering hooks and devastating uppercuts, throw straights down the pipe and unleash brutal elbows from a short distance.

The pocket is the distance between two fighters when a strike can be thrown without reaching. Often this area is equal for both fighters as most guys in the division tend to be similar in height and build. You will see reach differences of one to two inches and while it does make a slight difference, it isn’t too hard to negate that if you are the shorter fighter.

However, fighters like Brock Lesnar and Jon Jones have ridiculous reaches, which makes it nearly impossible for an opponent not to be hit on the way in to deliver their own strike.

But it isn’t impossible to get inside a longer opponent. For examples, follow me after the jump.

When Duane Ludwig met up with Amir Sadollah on the UFC on Versus 5 card in August, 2011, many felt the lengthier Sadollah would have the advantage since they were both Muay Thai practitioners but had a significant reach difference.

Sadollah would enjoy a 75-inch reach which would dwarf "Bang’s" reach of 70-inches by nearly half a foot. In a game of inches where a single missed punch can cost you the fight, a sizeable reach advantage for that could mean a lot.

Coming into a camp knowing you will be on the short end of the stick, we can assume Ludwig sparred with long fighters and really worked on his head movement and footwork. Speed would also be a necessary skill worked heavily on.

One of the initial ways you can get inside the pocket of your lengthier opponent is to come straight forward with your punches. Almost each punch thrown by Ludwig above is a straight punch thrown as he moves forward. In order for Ludwig to land a strike on Sadollah he needs to slip past the longer arms and he does so by attempting to get his strikes off first.

By delivering the punches first he is able to sneak inside the pocket, he also delivers straight punches which land faster on a quicker path. As soon as Ludwig lands he backs off and resets staying outside of Sadollah’s range. He throws head kicks on the way out to keep Sadollah honest and not aggressive.

Even though Ludwig lands nothing of significance he keeps Sadollah from pushing forward, when you are moving backwards your stance and reach alter leaving you with less room to use your reach. It also limits the reach, when coming forward extending punches you have the opportunity to use all of your reach and in comparison while moving backwards you do not.

But Ludwig was not finished there.

Catching the subtle work that is going down is the key to this clip. Ludwig slips his head from side to side very effectively although it is a slight movement. He slips to the left avoiding a power right from Sadollah and lands his own right hand simultaneously. As Sadollah misses on his punch, the punch extends past Ludwig. With his defense temporarily vulnerable, Ludwig throws a stronger strike, a left hook that rocks Sadollah backwards.

When fighting inside on a longer fighter head movement is the key to a successful game. When a punch is slipped the longer fighter now has a longer distance to backtrack his strike to put it back to defend his face. Split second decisions by speedy strikers can capitalize on these small lapses of time.

Speed kills and Ludwig showed exactly why simple reflexes can win fights. Ludwig would implore the game plan of evading punches with head movement and delivering quick, crisp strikes to keep Amir on the defensive.

Another thing to notice in this clip is that whenever Ludwig backs Amir up he immediately presses forward. He swarms and never allows Sadollah to reset and fire back.

Remember when I mentioned that speed kills? Well, Demetrious Johnson is the truest example of that. When Johnson met up with tall, rangy Miguel Torres there would be a huge difference in size.

At 5"3 sporting a 66-inch reach, Johnson would face a tall task in the 5"9 Miguel Torres who would bring into the cage a 76-inch reach. With a 10-inch advantage Torres would look to feast upon the significantly smaller opponent.

Johnson, who was the eventual winner that night, would show throughout the fight how to negate the size difference. In this clip the smaller Johnson would throw a head kick way outside his range and a superman punch. Neither landed, both were effective.

The kick made Torres take a step back preventing Torres from wading in closer to unleash any sort of offense. Johnson would then lunge forward with a superman punch that was not remotely close to landing but caused Torres to further back pedal. In his launching motion Johnson was so quick to get inside on Torres that he didn’t throw a single counter strike.

Johnson initiates the clinch and eventually earns a takedown off the cage. Johnson knew that if he wasn’t aggressive and fast he would be picked off from ten inches away by Torres.

Getting inside on a longer opponent isn’t easy; Dominick Cruz has shown that length wins fights by defeating smaller foes in Joseph Benavidez, Brian Bowles and Urijah Faber. Jon Jones and Anderson Silva have also shown this to be the case.

But it isn’t impossible to conquer, using speed and timing to match your head movement are the keys to winning. Staying inside the pocket means you will have to keep the pressure up and smother the comfort of the longer fighter. Keeping them on their heels moving backwards will equal the disadvantage.

That is all for today Maniacs.