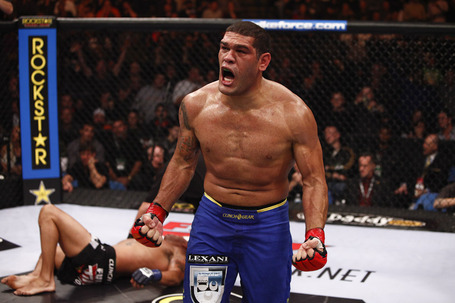 The last time we saw Antonio Silva he was kissing canvas at the Strikeforce "Barnett vs. Kharitonov" event after his fellow heavyweight, Daniel Cormier, knocked him clean out inside the first round.

"Bigfoot" was just one fight away from advancing to the finals of the Strikeforce heavyweight grand prix after having defeated the legendary Fedor Emelianenko earlier this year. His knockout loss to Cormier, just the second of his career, leaves him in a precarious position.

What’s next for the 6'4'' 265-pound behemoth? A potential move to a bigger playground with a lot more dangerous playmates, that's what.

This according to Silva’s manager, Alex Davis, who tells Tatame he hopes to see his client bang it out with the big boys of the UFC real soon:

"He has a contract with Strikeforce, but Strikeforce is now controlled by the UFC and we're watching Strike force fighters going to the UFC all the time. UFC's heavyweight division is big, but they could have even more, and I'm sure Bigfoot will be in the UFC real soon. There's a lot of great fights for him inside the Octagon, and he'll shine there."

Now that the heavyweight tournament has its final two participants (Daniel Cormier and Josh Barnett), Alistair Overeem has jumped ship to the UFC, and Fedor was released, are there any good fights left for Silva in the Strikeforce ranks?

The UFC has slowly but surely been absorbing many of the top talents from its smaller sister organization, an indication that leads many to believe the promotion is dying a slow but certain death.

Does "Bigfoot" have the chops to find success against the best of the best in the UFC? Or does he even deserve a call up to the big show given the result of his last fight?

One thing is certain: if and when the move happens, there will be no shortage of opponents for him. Who would you like to see welcome him into the fold?