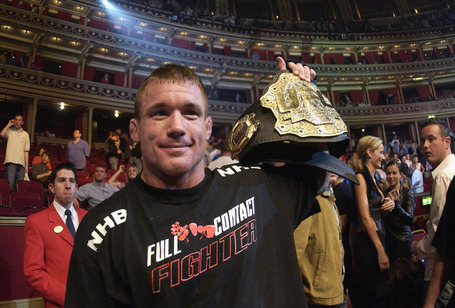 With anything in life, the time comes when you are not able to perform at the high levels you once did.

We all get older, one step slower, reaction time is not as fast as it used to be. It's the reality of life. Michael Jordan and Muhammad Ali are two of greatest legends in their respective sports, basketball and boxing, but have fallen victim to that reality. They were at the top of their careers and are arguably recognized as the greatest to ever participate in their sport.

However, they didn’t end their careers on winning notes.

Michael Jordan ended his legendary career as a lowly Washington Wizard after we saw him win six NBA titles with the Chicago Bulls. Muhammad Ali ended his stellar career with two consecutive losses after destroying everyone in his path.

Then we have Matt Hughes, the former UFC welterweight champion and UFC Hall of Famer with 54 fights under his belt and a "who’s-who" list of opponents (and victories). Hughes dominated his division and at one time seemed unstoppable. However, Hughes has now suffered two consecutive knockout losses to B.J. Penn and Josh Koscheck and is seemingly in the twilight of his career.

Like Jordan and Ali, Hughes may not get the chance to end his career on a winning note, but what will you most remember him for?

What will define his legacy?

Hughes began his dominance as welterweight champion at UFC 34 when he viciously knocked out Carlos Newton with a powerful slam that is a regular in the UFC highlight reels. He defended his belt five times until he ran into the "Prodigy," B.J. Penn.  Penn’s Brazilian Jiu Jitsu (BJJ) proved too much for Hughes as he submitted Matt with a rear naked choke and ended his run as champ.

Fast forward two fights later, and Hughes was once again UFC welterweight champion when he submitted a young Canadian by the name of Georges St. Pierre. Hughes went on to again defend the title two more times and in the process took part in a rare UFC superfight against none other than fellow UFC Hall of Famer, Royce Gracie.

Hughes dominated the legend from the beginning of the bell and eventually unleashed a barrage of powerful strikes that forced the ref to step in and save Gracie. Hughes eventually would lose his title when he once again stepped into the Octagon to face George St. Pierre.

This time, all respect and worship from GSP was gone.

George St. Pierre willingly admitted that he had too much respect for Hughes in their first encounter, which led to his tentativeness. This fight proved to be a whole different story as the Canadian knocked him out to become the UFC welterweight champion.

Since that fight, Hughes compiled an even record of 4-4 with two consecutive knockout losses. With his unwillingness to say the word "retire," Hughes proclaimed he is simply on the shelf until the UFC decides they need him.

13 years and 54 fights in the game, Hughes has indeed had an illustrious career.

His resume speaks for itself: Two-time UFC welterweight champion, UFC Hall of Famer, most wins in the UFC (18). Georges St. Pierre, B.J. Penn, Royce Gracie, Carlos Newton, Hayato Sakurai, Matt Serra, Frank Trigg …. Hughes has fought and defeated the best of the best, not when they were at their tale end of their careers, but when they were in their prime (with the exception of Gracie).

From powerful knockout slams, to tremendous wrestling, to freakish strength and underrated striking, Hughes epitomized the "American Fighter" role and he put it all together very nicely. Hughes is without a doubt one of the most decorated champions in UFC history.  His "I’m better than you" attitude didn’t win him any friends (just ask Matt Serra), but the born again Christian doesn’t really care if you like him or not.

He did, however, make sure that at the end of the day, win, lose or draw, you did respect him.

Cain Velasquez, Anderson Silva, George St. Pierre ... those are the new stars and champions of today. They are the lucky ones in the sense that they are champions and stars in a time when MMA has reached new mainstream heights that were not even thought possible in Matt Hughes’ era.

Hughes dominated the UFC in a time when it was still fighting for its life. Bud Light and Harley Davidson were not knocking on the door to get a piece of the pie, if anything, Hughes and the UFC were fighting to prove that MMA was a legit sport and trying to convince the higher-ups like Senator John McCain that MMA was not "human cock-fighting."

It may be unfair that such a pioneer will not be able to get the mainstream exposure and spotlight that the stars of today receive, but Matt Hughes can hold his head high and know that he has secured his legacy and no one can ever diminish or take that away from him. However, the spotlight and fame is something that Hughes has never been too preoccupied with.

Hughes is a simple man, a good old country boy that prefers to work on his farm than attend a celebrity-filled awards show. Hughes has provided fans with so many memorable moments that his career will not be forgotten, and his legacy and career is truly one for the history books.

Now that leaves you, the MMA fan, to help decide which spectacular moment in his career will best define the Matt Hughes legacy, which was broken down fight-by-fight in this piece at MMA Nation:

Which fight do you feel was Matt Hughes' "most spectacular fight of all time" and best defines his legacy?