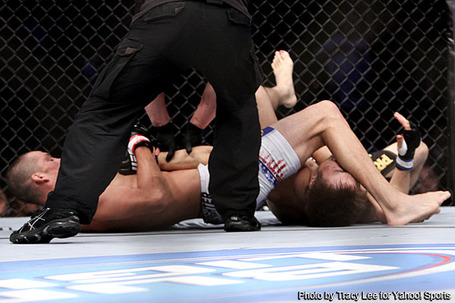 As all fans of mixed martial arts know, sometimes the way to end a fight comes as easy as a tapout. However, achieving that tapout can be very difficult and when at the sport's highest level -- especially within the UFC ranks -- it becomes even more of an arduous task to gain submission victories.

Submissions can come from a variety of disciplines stemming from the most feared Brazilian Jiu Jitsu (BJJ), to the under-appreciated Judo and even the often forgotten arts like Krav Maga and Aikido. Regardless of how you learn them, they are equally difficult in pulling off without proper set up and technique.

Submitting people from your back is often considered much more beneficial in the mixed martial arts world since it is a counter to the influx of smothering top game wrestlers. Being well versed from your back makes it uncomfortable for opponents to attempt to fight on the ground.

As we get into more detail in the art of submissions we come across a similarity in wrestling. That similarity is "chaining." I am sure we have all heard chain wrestling but how about chain submissions or chain grappling? It works the exact same way: it is basically throwing combinations (like in striking) except on the ground.

When you set up the overhand right with a 1-2, jab and cross combo, it is much like using full guard and an arm trap to set up a triangle. Then when you use that triangle to finish with an arm bar, you have just chain submitted your opponent.

For more in depth breakdowns, follow me after the jump.

At UFC 135, Nate Diaz would look to defeat Japanese MMA legend Takanori Gomi. Diaz would be fighting him years after his brother submitted Gomi with a gogoplata following an all-out war between the two. Despite the bout being overturned, the Diaz rivalry would be rekindled as Nate would look to put Cesar Gracie’s Stockton boys 2-0 against "The Fireball Kid."

With under a minute left in a fight that saw Diaz absolutely train wreck Gomi with crisp and powerful boxing, we find ourselves watching Diaz trapping Gomi within a triangle choke. Diaz grabs an under hook on the untrapped arm of Gomi and uses that to swivel his hips to cut the angle causing the choke to be tighter. Gomi is working hard to defend. (For a breakdown on how this triangle works click here)

Gomi stacks Diaz and lifts up for a slam, the slam is an attempt to looses the legs of Diaz and even cause them to separate however Diaz has this one way too tight. Diaz has it very deep and the choke causes Gomi to roll over in defeat. As he does he leaves his trapped arm within the wrist control of Diaz, the angle of the submission allows Diaz to fluidly throw the right leg over the head/face of Gomi transitioning into a beautiful arm bar causing the submission to go from choke to joint pain which causes Gomi to tap almost immediately.

Just a few weeks earlier relative unknown T.J. Waldburger would also put on his own display of chain grappling. An undercarder who had an average record, would put on a second fight that would feature highlight reel finishes.

Fasten your seatbelts for this one Maniacs.

Mike Stumpf was thoroughly in for a ride when Waldburger began chaining his grappling together. With Waldburger in top control almost in a north-south position it appears that he is attacking with a kimura while over Stumpf, however he extends that arm out and immediately transitions into an arm bar. As he sits back on it Stumpf defends and doesn’t allow both legs to be placed in prime position, still Waldburger works for it.

While still pulling back on the arm and fighting to get his leg up and over, Waldbruger gets the arm bar and forces Stumpf who is now attempting to roll to go belly down. As Stumpf rolls he does help his cause, he rolls and pushes the leg over his face and keeps his arm out of danger escaping an arm bar or a triangle.

However, Waldburger remains in control of the trapped arm with his right arm and with his left hand he pushes Stumpf away creating enough distance to thread the leg over the shoulder once more trapping Stumpf in a triangle choke. Remember, in most submission posts, I always remind that distance and spacing is everything and this proves it yet again.

With the choke in place Waldburger pulls the head down and earns the tap out, adding to his already impressive grappling highlight reel.

Two fighters, two different submissions with the exact opposite set ups resulting in the same conclusion. Both Diaz and Waldburger show that the set up to the submission is just as dangerous and important as the execution of the submission itself.