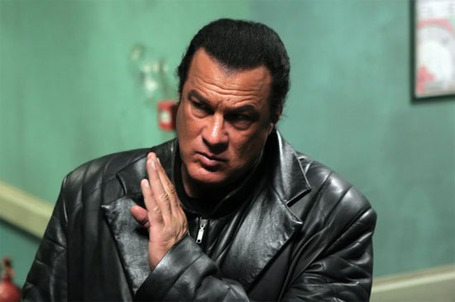 Save it for Black House, Steve-O.

Bloated B-Movie action star Steven Seagal has recently been mingling with high-profile UFC fighters like Lyoto Machida and Anderson Silva. He's even gone so far as to take credit for some of their recent victories over Vitor Belfort (Silva) and Randy Couture (Machida).

The Black House team members seemed to have welcomed Seagal with open arms; however, it seems not every mixed martial arts fighter is so keen to welcome him.

Speaking after his victory over "Rampage" Jackson this past weekend (Sept. 24) at UFC 135, Jon Jones reveals that Seagal asked to speak to him for some pre-fight "words of encouragement" -- but the light heavyweight champ was having none of it.

"Yeah he called me a few days before the fight and just told me that he felt as if I was going to win the fight and that he saw a lot in my skill set and he thought he could help and he was wondering if he could come and talk to me backstage before the fight and give me some words of encouragement. I did not think that would be a good idea, my training staff works very hard on me and I'm their prodigy and I don’t want to disrespect them by welcoming someone else's master into our room, into our family."

What do you think Maniacs, is Seagal simply trying to grab onto as much fame as he can by snuggling up to the most high profile MMA stars and take credit for their success?

Or maybe he is just a good guy that wants to spread his words of wisdom and his "experience" in fighting to the young champions?

Whatever the case may be, Seagal may have to stick with Team Black House because Jackson's camp is having none of it.