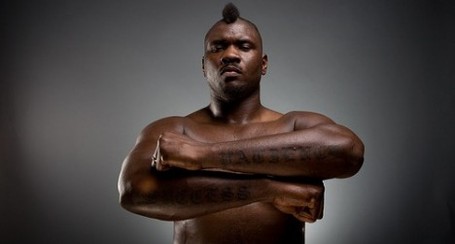 Rogers has had a rough go of things, as of late. After losing his last three Strikeforce fights in a row, Rogers ran into some highly publicized legal problems involving a domestic dispute with his wife Tiuana.

Rogers was cut by the Zuffa organization immediately after the incident.

Since that point in time, "The Grim" was signed by Titan Fighting Championships and scheduled to resume his career.

Let's take a look at the rest of the card.

Former World Extreme Cagefighting (WEC) lightweight champion Jamie Varner will also make his debut with the promotion as he squares off against Dakota Cochrane.

Cochrane stepped up to take the place of Varner's original opponent, Alonzo Martinez, on two days notice. He is currently riding a five-fight win streak and has enough of a skill set to potentially pose Varner a challenging fight.

Former Bellator fighter Rudy Bears will also be featured on the main event as he will face relative newcomer and former Strikeforce fighter A.J. Matthews.

The show makes for a great way to "pre-game" for UFC 135 on Saturday night (Sept. 24). If you don't have HDNet, find a friend who does and crash their pad!

All the main card happenings will begin to air on HDNet, LIVE at 10:00 p.m. ET. After it's all wrapped, check out MMAmania.com for a total recap of Titan Fighting Championships 20.