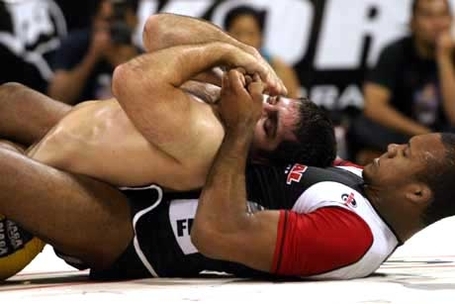 This weekend (Sept. 24-25, 2011) will be the biennial competition of elite and world class Jiu-Jitsu practitioners hosted by the Abu Dhabi Combat Club (ADCC). This year's event will be located in Nottingham, England.

For those unfamiliar with the event, ADCC is a no-gi grappling tournament that is usually recognized as the most prestigious of all no-gi tournaments. This is mostly due to the fact that the competitors are always world class (by invite only) grapplers or participants that worked their way through trials after trials to earn their spot.

Grappling legends have seen their careers birthed here, a "who's who" of the Gracie family have often competed here as well as mixed martial arts notables like Diego Sanchez, Jeff Monson, Fabricio Werdum and Tito Ortiz, just to name a few.

In this post, I will share with you the competitors of above 99kg (over 217 pounds) division as well as the most anticipated matches of the tournament, the "Super Fights." Their respective weights in pounds are 143 and 167. The above 99kg division features the "heavy hitters" of the grappling world.

These are the big boys folks, the heavyweights of the grappling world. All the top dogs from last year return with the exception of Saulo Ribiero. This year the same guys will be atop the leader boards as not very many heavyweight grapplers have made impressive enough statements to suggest any huge upsets.

Fabricio Werdum should be the favorite to win this bracket and that will come as no surprise as he also won in 2009. One of the few grapplers who has been able to transition from MMA to BJJ fluidly back and forth, Werdum uses a very technical top game to compliment the beautiful triangles he hits from his back. He is dangerous no matter where the match goes.

Vinny Magalhaes is another grappler to watch as he is very entertaining and loves flying submissions. He is one of the more "new school" Jiu Jitsu players in this division and should be a shoe-in to place at the podium.

The other sleepers in this bracket should be Roberto Abreu also known as "Cyborg," who has defeated plenty of top guys but has been documented as competing with hampering injuries all year long. If healthy, Abreu brings with him a very tricky "Tornado Guard" which is highly effective for him to sweep the heavies in this weight class.

Jeff Monson is the "old school" of grappling and has been successful in this tournament for over a decade. His leverage and powerful top game has made him a formidable opponent for anyone. Monson placed third in 2009 and did so with a big win over Saulo Ribiero.

The guy many may not know and will be my "eat crow" pick to place is Gerardi Rinaldi who may be outsized but possesses phenomenal wrestling and earned a quick and respectable Black Belt from Renzo Gracie. I think he will make waves and have an impressive showing.

I believe the favorite to win is clear in Werdum; however a healthy Abreu may be the man to upset him. I still feel confident in standing behind Werdum to win and Abreu and Magalhaes taking the second or third spot.

While the inner Gracie fanatic in me is pulling for Renzo to add another legendary accolade to his already beyond respectable resume I believe Sperry may just be too big. Sperry was 220+ pounds when competing and that trumps the sub-200 pounds Renzo has usually competed in. However, Renzo’s guillotine may spell disaster for Sperry in this fight as well as his craftiness from underneath. Sperry brings with him ADCC crowns from 1998-2000 and he will be my pick to win.

Now this is the match to watch if you were to pick a single one from the entire tournament. Even though Jacare has beaten Estima already four times there has been a drastic improvement in the BJJ of Estima while Jacare has been competing in MMA. Jacare is an explosive wrestler and has been one of the best for years, Estima has countered with cross training alongside Pablo Popovitch who will in all likelihood be a winner in his respected division.

This very well could go down as one of the most technical Jiu Jitsu matches of the entire weekend, there will be little room for anything fancy as these guys are masters at capitalizing on mistakes. Personally, I will lean with Estima as I don’t know how all the time off from competition will affect Jacare. This may be the biggest weekend in the grappling career of Braulio Estima.

For the other breakdowns click here and here. Also, for a detailed breakdown of ADCC as a tournament with history, BloodyElbow has a great piece which you can find here.

Those are the previews Maniacs, now all there is to do is wait. This weekend will be a very fun weekend for both mixed martial arts and Brazilian Jiu Jitsu.