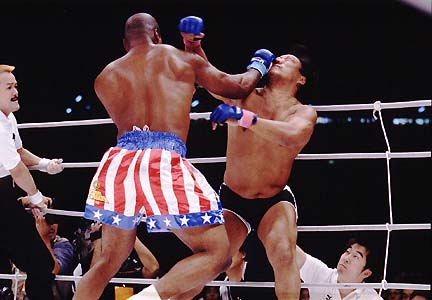 FanPost edited and promoted by MMAmania.com.

UFC 135: "Jones vs. Rampage" is live this Saturday night (Sept. 24) from the Pepsi Center in Denver, Colorado. The main event pits reigning light heavyweight champion Jon Jones against one of the division's most colorful personalities in Quinton Jackson.

Jackson earned his second crack at the light heavyweight crown by beating Matt Hamill at UFC 130 and becoming just the second fighter ever to beat Lyoto Machida at UFC 123..

Many fans have harped on "Rampage" for his lackadaisical approach to training and evolving but he simply outclassed one of the division's best wrestlers in "The Hammer" and like I previously stated, he beat "The Dragon" which is in fact an accomplishment in and of itself. He's also stayed active the past eight months which is a sign of good things to come.

No question that Jones is a fighter unmatched by anyone in the UFC (at the moment) but when people have doubted 'Page in the past, he has come up to shine. Is UFC 135 going to be one of those nights where Jackson shuts up the doubters and haters?

Let's go back to PRIDE 17 on November 3, 2001, where Jackson earned his first official knockout.

The Tokyo Dome in Tokyo, Japan, was rocking as PRIDE invaded with a double main event. The 'Texas Crazy Horse' Heath Herring was getting a chance at the PRIDE heavyweight title but would have to rip it from the black belt grip of Antonio Rodrigo Nogueira. The main event event was the genesis of the famous PRIDE middleweight title as the 'Axe Murderer' Wanderlei Silva was taking on Japanese sensation Kazushi Sakuraba.

The second tilt of the evening featured our main focus, Quinton 'Rampage' Jackson against Yuki Ishikawa. You may be asking 'who is Ishikawa,' well, many hardcore fans will pull up his stats but for the sake of this piece, he was a mere sacrificial lamb for the slaughter.

Jackson already held wins over Mike Pyle and Alexander Otsuka and in his 13 fights prior was a very impressive 11-2. He held TKO and submission wins (yes Jackson submitted fools) but did not have an "official" knockout win thus far.

It would all change

For one minute and 57 seconds, Jackson may have been the most violent he has ever been. He slammed Yuki like Casey Heynes did to that bully in Australia. He landed two knees, one illegal due to it hitting the back of Ishikawa's head, but each landing flush. He tried multiple times to 'powerbomb' Yuki like he would later do to Ricardo Arona.

It was just a good ole ass whoopin' as WWE announcer Jim Ross would say.

Jackson, after submission attempts failed and powerbombs failed, would get Yuki up against the ropes. Jackson ate a punch like it was nothing and then nailed a knee which caused Ishikawa to make the fatal mistake of dropping his hands. Then Rampage landed a flurry and a short left hook dimmed the lights for the Japanese fighter.

Rampage would go on to improve to 12-2 and move up the PRIDE middleweight rankings. Decked out in Apollo Creed USA flag shorts, he was making people look like Rocky in Rocky one -- but Rocky getting knocked out in the end.

For  a video of the Jackson-Ishikawa bout click here

The evolution from wrestler who hits hard to Boxer with great takedown defense is clear. He uses triangluation very well in combination with roll and cover. He used triangulation to avoid the looping bombs of Wanderlei Silva at UFC 92 which resulted in him avenging to losses to Silva and earn one of the most brutal knockouts. The art of triangulation is using your forearms to slip punches while working yourself into the pocket. Rampage took little-to-no damage in that barrage regardless of how violent Wanderlei was throwing.

'Cover-rolling' was used at UFC 71 where Rampage knocked out then-UFC light heavyweight champion Chuck Liddell. 'Cover-rolling' allows you to attack at angles while exploding through. Dip down, drop levels and explode upwards over your back foot creating amazing velocity and force.

If Rampage can find some form of harmony with these techniques he may cause fits for Jones as he has not faced a pure boxer the likes of Rampage. I know the reach difference is heavily in Bones' favor but Jackson is very dangerous in these situations.

If Bones decides to stand and bang with Rampage he may not respect the power of Rampage or his chin. If Rampage slips the jabs from Jones and works 'roll in cover' he can get in close enough to knockout Bones. I look at the bout with Liddell at UFC 71 for example: in the early moments you saw Chuck swat a lazy jab to create distance and gauge his opponent to commit to something. Why? Because Chuck Liddell is a pure counter-puncher.

Jones is a lot more aggressive and that comes from confidence that he can establish his game and he has in most cases. I just feel he has hit a bad point of 'confidence meets cocky' whereas prior to his win over Shogun he just seemed confident. He now appears to believe he can eat whatever Jackson throws and thus he will miss a punch and Rampage will send him to the mat.

I still think the era of Bones goes on after UFC 135 in championship gold but I don't doubt that Rampage may get his title back.