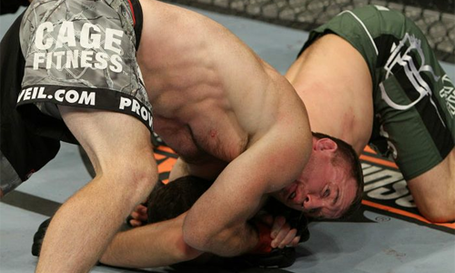 In just a few short days, the mixed martial arts community will be treated to a light heavyweight showdown between Jon "Bones" Jones and Quinton "Rampage" Jackson. But before the UFC 135 main event, we will be bear witness to a grudge match in the welterweight division.

Matt Hughes and Josh Koscheck will meet in the middle of the Octagon in a fight that many have been waiting for since the first time Koscheck called Hughes out. These two fighters have somewhat of a history coming from a claim that Hughes had been avoiding fights with the guys from American Kickboxing Academy (AKA). Josh Koscheck, of course, the lead mouth for the trio of welterweights at AKA, pushed the issue the hardest and will now be able to square off with the legendary hall-of-fame fighter.

Hughes, despite being on the tail end of his career, is still no slouch. It wasn’t too long ago that Hughes choked Brazilian Jiu Jitsu (BJJ) Black Belt Ricardo Almeida unconscious. While many will remember Hughes for having powerful wrestling and ground-and-pound, many overlook the fact that Hughes was an Abu Dhabi Combat Club (ADCC) participant and many agree that he would be a black belt in Jiu Jitsu had he ever studied under someone who runs a belting system.

With 45 wins in his career, Hughes can boast 20 of those by way of submission. Those taps varied between rear-naked chokes, arm bars, arm-triangles, key locks and his infamous front choke on Almeida.

For some grappling highlights of Hughes, follow me after the jump.

After losing his title to B.J. Penn, Hughes would rack up three very quality wins. He would defeat Renato Verrissimo, arm-bar Georges St. Pierre and choke out Frank Trigg. That would set up a title fight with the 23-5 Joe Riggs who was looking to make a splash in the division.

However, Riggs would not make weight and the bout would turn into a non-title three round fight.

Matt Hughes, being the explosive wrestler that he is, shoots in more than a minute in with a very powerful single leg. He wraps around the low thigh/high knee of Riggs and pulls back and up. From there he explodes downwards and puts Riggs down on the mat. Immediately, Riggs falls into the butterfly guard position and you can see how agile and swift Hughes is as he looks to improve his position.

As Hughes tries to locate an opening he able to separate from the legs under hooked in his thighs and is able to pass into the half guard position. As we have always mentioned, it is important to establish space to accomplish pretty much anything in grappling.

Hughes, a top notch wrestler shows that with the addition of a dangerous grappling acumen that it is very hard to stop him from imposing his will. Not only can he get you down but he also will pass your guard.

While in half guard, it is easy to contort your posture in order to attack an arm for a kimura or americana (for that breakdown, click here). Hughes has always been noted for having tremendous strength and starts attacking the kimura with his figure four grip, his left hand clutching the wrist while the right hand slips under grabbing his own wrist and he torques the entire arm behind Riggs as he is defenseless on his back.

You can see the ensuing struggle between the legs of the two fighters. Hughes wants to slip out into side control to be able to apply more pressure and Riggs knowing this would like to prolong the submission in hopes he will escape. Hughes continues to apply pressure and the more he has the arm behind the back of Riggs the more pressure and pain is induced.

Riggs allows Hughes to slip out of half guard and no surprise submits mere seconds later.

Hughes showed his dangerous top submission game, the same that earned himself an arm-bar victory over St. Pierre the year before.

After the bout, Hughes would defeat and outclass legendary Royce Gracie before he would get to rematch "The Prodigy" at UFC 63. And Hughes would earn his revenge late in the third round of their title fight and Hughes tenth UFC title fight.

After a flurry and ensuing takedown on Penn, Hughes has positioned himself into a side control position. Not many have been able to take Penn down let alone pass his guard. Hughes out of any fighter that Penn has fought has placed him in the most dominant position.

While in side control, Hughes utilizes his superior conditioning to swarm and overwhelm Penn. He sits very high in side control putting a lot of pressure on the chest and he uses his left arm to under hook underneath the arm-pit of Penn to disable any usage of that side. He then uses that advantage to start his onslaught of ground and pound.

While the ground and pound went on Hughes was able to trap the free arm of Penn and move into a mounted crucifix which is one of the hardest to escape and most dominant to use. With one arm trapped by Hughes using the under hook and the other trapped by the legs of Hughes it was only a matter of time … and punches until the referee would stop it.

Hughes showed his exceptional grappling by running through a highly accoladed B.J. Penn. Not only one of the best to ever fight and a UFC champion, Hughes is also a world class grappler.

And meeting up with Dave Camarillo-trained Josh Koscheck just may end up being a grappling showdown between the two gifted wrestlers.

Who's your pick in this battle of old school vs. new?