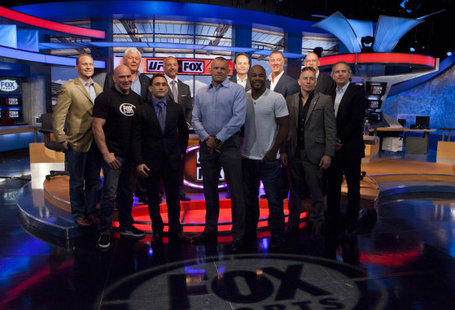 It's been just a few short hours since UFC President Dana White announced the fight that would showcase his promotion in its debut on network television after the historic partnership with FOX. The news has triggered countless debates and topics further inquiring about this groundbreaking news.

The big news, though? The heavyweight crown will be up for grabs live on free TV.

As that soaks in for all the mixed martial arts fans, it should be noted that there is a lot being overlooked. There are so many angles that have been created and so much more behind the scenes issues that should be up for discussion.

And that's what we're here for.

For other significant issues coming from this major announcement, follow me after the jump.

The impact on the Manny Pacquiao vs. Juan Manuel Marquez boxing pay-per-view (PPV):

In case anyone hasn’t heard, one of the two biggest draws in the boxing world will be fighting on November 12, live on pay-per view. Manny Pacquiao, who many consider to be the best pound-for-pound boxer fighting today, will take on tough veteran Juan Manuel Marquez. In terms of significance, this fight will be one of the most important of its kind all year.

The UFC has decided not to counter the fight with a show of its own. Instead, they chose to share the date with a card on FOX that will air earlier in the night and be over before the start of the Pacquiao vs. Marquez bout. Combat sports fans will be able to watch both fights live.

But that doesn’t tell the whole story.

Showcasing the mixed martial arts fight beforehand is an easy way to snake some viewers who are getting ready for BBQ’s and getting prepared to hit a local bar. They will garner extra eyes having a fight late afternoon and it will also steal some attention and anticipation prior to the boxing fight.

The fight will also turn a lot of heads both in the sporting world and boxing world more directly. Throughout history, the heavyweight division in the combat sports world has been highly discussed, debated and interesting. Most of the sports biggest names have been heavyweight fighters. Even in the entertainment world, the WWE’s biggest stars tend to be the much larger and more physically imposing performers.

The UFC and FOX, even if not intentionally, are stealing the buzz around one of boxing's premier fights and, by extension, fighters. They wont be making a dent on the PPV numbers by competing in the same time slot but they could very well effect it by taking some of the media attention and fan interest.

Bottom line, the combat sports world will be treated to a rare occasion. The sports most debated division will boast its two champions on free television. When the UFC announced the deal with FOX not many would jump to the conclusion that the heavyweight title would be up for grabs on the network television premier.

This will also be one of the few times in mixed martial arts history where the number one and two ranked heavyweights will be fighting. The last notable occurrence of this is when Fedor Emelianenko fought Antonio Rodrigo Nogueira in Pride.

What better way to bill a fight then this: "Watch the two best heavyweights in the sport clash on live TV!!!"

The UFC is looking to build stars and with the retirement of Chuck Liddell and Randy Couture, the illness hampering Brock Lesnar and the new wave of young and unknown champions filling the ranks, what better way to build your companies heavyweight superstars?

The winner of this fight will propel himself into super stardom as the best heavyweight in combat sports. The rarely talked about brothers in boxing will stand no chance in terms of popularity when the champion is announced on network television.

Logistics of the show:

Even though many have complained of the one-hour show featuring only one fight, there has to be considerations given to this major announcement. Most notably, understanding that this is a title fight which has the possibility of being 25 minutes long. The possibility of a foul or stoppage in time during the bout could prolong it further. The last thing the UFC wants is to run out of time in its first foray onto network TV.

In terms of 60 minutes, understand the fight alone could be a total of 25 minutes. Commercials will presumably air between rounds, which lasts for around one minute total, would mean four, one minute commercial breaks. We can also expect commercials both before and after the bout begins and concludes. So we are looking at at least 30 minutes there. Also, they will spend a segment welcoming viewers of Fox to the new era of MMA on network TV. That will be 40 minutes. Now add in each fighters entrance and some pre fight hype and clips you are looking at a rough estimate of about 50+ minutes maximum.

There will be an entire preliminary card underneath the Velasquez vs. Dos Santos bout, so in the event that they need to fill some extra time on the live broadcast on FOX, they will have quite a few fights to choose from. It may seem odd to offer just one bout over an hour long program but they've done well to leave themselves plenty of options with an extremely flexible broadcast partner.

The UFC knew what they had to do with this fight card. They knew very well they needed to make a huge splash for its new partners. We're not on Spike TV anymore.

Today, a historic announcement towards the progression of the sport was announced and we should all be celebrating.