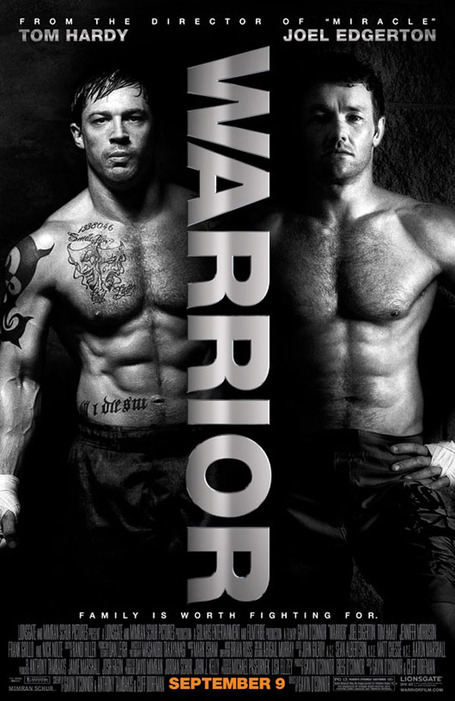 OK, before those of you who've seen this film jump down my throat, let me start by saying. I LOVED this movie and will not be at all surprised if it gets some Oscar nominations, particularly for the actors.  The storytelling of this film was brilliantly done and the acting was superb all around. The three main characters, played by Joel Edgerton, Tom Hardy, and Nick Nolte, were all brought to life with vivid poignancy and their stories were fleshed out by the script with just the right amount of detail, just the right amount left implied but unsaid.  They were believable and engaging and the film does a great job of sucking you into their lives and making you really care what happens to them.  The pace of the plot feels a tad rushed and, like most sports movies, there are some improbable coincidences.  But Jennifer Morrison's legs alone are enough to make you forget all that, even if the story and characters weren't as engrossing as they are.  But they are thoroughly engrossing, as are the themes of this film, which is largely a story about forgiveness.  Make no mistake, I HIGHLY recommend this film and think it is a beautiful story, masterfully told.

So why then would I say that this movie, one of the best "sports films" I've ever seen, is doing no favors for the sport it depicts?  Read on....

As MMA fans, we all know how our beloved sport has struggled for legitimacy.  In spite of Dana White's best efforts and our own, the majority of the mainstream American public still think either that the UFC is just "another brand of WWE" or that it is essentially, to use Senator John McCain's words, just a brutal inhumane glorification of "human cockfighting."  So what does Warrior do to combat these misconceptions still held by so many average Americans? .....unfortunately, nothing!

While the film does portray MMA fighters as real people with real human struggles, family and financial problems just like anyone else, this does not speak to the legitimacy of the sport itself.  We recently saw a gritty realistic heartbreak story of a ProWrestler in Micky Rourke's The Wrestler, where we saw that no matter how fake the sport, the pain of the people involved is still real.  So Warrior really does nothing to convince anyone that MMA is any different from Pro-Wrestling.  And as for MMA's biggest criticism, the idea that it is just a brutal Toughman contest between street thugs...the movie passed over it's many opportunities to educate people to the contrary, to show fighters as Martial Artists and masters of technique.  Not only were there more brutal slams and beatdowns in this 2 hour film than one is apt to see in a year of watching UFC, but worse yet, almost completely gone was the educational commentary of guys like Joe Rogan & Pat Miletich who teach the new fans what they're watching. Instead of commentary that explains what an armbar or omoplata is as it's happening, we basically get two guys ringside saying "Oooh, did you see that! That was brutal!"

For the avid MMA fans, as the people who made this film obviously were, this presents no problem. We already understand and love the sport.  But for the average movie-goer who knows absolutely nothing about JiuJitsu, this lack of explanation coupled with the pathetic camerawork makes the sports action of the film extremely hard to follow or understand.  The extreme closeups make it hard to see the combatant's body positions and the lack of Rogan-esque educational commentary leaves the average movie goer wondering "Whose arm is whose and why is the ringside guy saying he's in danger?"

In other words, while this film will definitely engage audiences to care about these two fighters, I think it does absolutely nothing to make them care about the sport itself.  In fact, I think it only re-enforces some of the negative images that MMA and it's fans struggle so hard to overcome.

That said, this movie is about forgiveness, and therefore I am willing to forgive it for wasting it's grand opportunity to introduce MMA to a wider audience in a way that would educate and draw their interest.  And why am I so forgiving?  Because, MMA aside, this is a truly exceptional film.