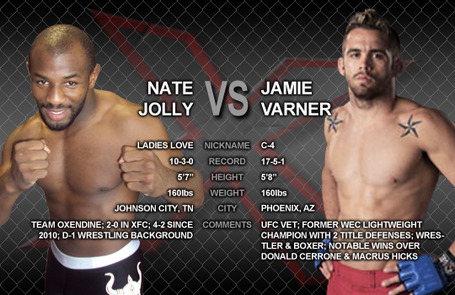 In addition to this exciting main event "Resurrection" will also feature some of the best MMA prospects from around the country looking to make a name for themselves live on HDNet.

According to XFC President John Prisco, "We are very excited about XFC 14. Jamie Varner and Nate Jolly is going to be a war. Those are two of the most explosive lightweights in the world and I think it could be the fight of the night. In addition to the main event I believe we have some of the most dynamic fighters from all over the United States on our undercard. I think from top to bottom this is probably the best fight card we have ever put together and I'm sure the fans in Orlando and those watching on HDNet will agree."

In the co-main event of the evening, Heavyweight prospects Scott Barrett (12-2) and Carmelo Marrero (13-5-1) will collide in the XFC cage. Barrett is looking to show the MMA community he is one of the top heavyweights in the world but will have to get through the tough UFC veteran to do so.

"I'm really excited to have Marianna Kheyfets back," exclaimed Prisco. "Marianna destroyed Kim Couture at XFC 11 and submitted her in the first round. We also have Josh Clark on the card. Josh has been running through everyone in his path on shows in Kentucky and we are going to really test him against a kid who knows how to finish fights, Reggie Pena. Charles Blanchard is another fighter I'm excited to have on the card. Charles is best known for being on The Ultimate Fighter but a lot of people don't know that he also defeated Douglas Lima. We have Charles matched up with Elijah Harshbarger, a slick BJJ practitioner from Virginia."

Announcing XFC 14 will be none other than the voice of the XFC, Christopher James. The charismatic sports announcer, known for his ability to get the crowd into the action, has been with the promotion since 2008.

XFC 14 "Resurrection" will take place on Friday, October 21st at the UCF Arena in Orlando, Florida. Doors open at 5:00pm and fights begin at 7:00pm. Tickets are on sale now through Ticketmaster (http://www.ticketmaster.com/event/22004721982252AA?artistid=1220910&majorcatid=10004&minorcatid=830). VIP tables are also available through XFC Corporate. Please call 813-625-1672 for more information. To learn more about the XFC please visit www.officialxfc.com, like them on Facebook, www.facebook.com/officialxfc and follow the promotion on Twitter, www.twitter.com/officialxfc.