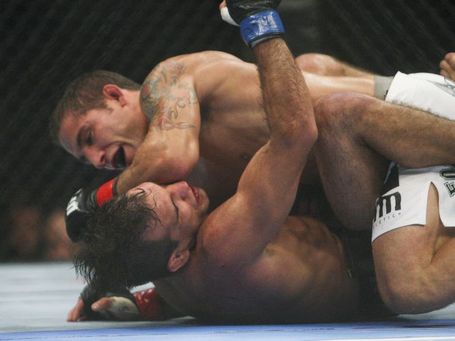 Continuing on a subject discussed in last week's "Ultimate Submissions," where we saw a grueling fight between Clay Guida and Anthony Pettis ending by unanimous decision, a lot of talk went into Guida winning the fight by being on top even though Pettis remained active from underneath.

There is no argument that earning top position will immediately put you in an advantageous position to not only win the fight, but to earn points should the bout go the distance. Knowing that fact should inspire all fighters to utilize training periods to really get wrestling into their arsenal both offensively and defensively.

If you can not defend a takedown, then rest assured you will end up on your back (and rightfully so).

After the jump, I will showcase some traditional and technical ways to achieve top position mixed in with some fun, risky and exciting ways as well.

One of the best ways to achieve top position is using takedowns to put your opponent firmly on the ground. Wrestlers have the immediate advantage in this sport because their background is solely focused on pinning opponents on the mat, in mixed martial arts this leaves openings for submissions and much more often "ground and pound."

While Diego Sanchez works a top game above on Paulo Thiago, he is flipped over by the feet of his opponent. Thiago is on his hips and explodes up and rolls back, flipping Diego up and over and escaping being on bottom momentarily.

Diego immediately starts chain wrestling. He snatches on a single leg while using a low ankle pick while he is on the ground, explodes up and pushes Thiago into the cage. He switches to a double leg getting his arms behind the high thighs of Thiago and powers him into the air. Diego runs with Thiago on his shoulders and drives him down into the mat.

Not only scoring points for the takedown and slam, Diego also makes sure to dump Thiago off at an angle enabling him to land in side control. He could have slammed straight down but would have ended up in a neutral position inside the guard of Thiago. While in side control Diego is immediately in a dominant position able now to push more offense and worry less about defense.

In this clip, Jake Shields has latched on tightly to the single leg of Martin Kampmann. Shields, notorious for being a grinder and overwhelming top positional grappler, shows the most effective way to land after a takedown.

As he drives forward on the single leg takedown, Kampmann begins to go down to the mat. As he does, Shields angles the drive downwards and lands outside of the guard. He doesn’t quite end up in side control but outside of the guard where he can attack much more than from inside the guard.

Then at the end of the clip you see Shields in the side control position as he hugs his left leg tight to the left thigh on the bottom fighter. He quickly throws over his leg and moves right into the mounted position.

The art of passing the guard.

Speaking of passing the guard, B.J. Penn shows one of the most impressive guard passes I personally have ever seen when he passes Brazilian Jiu Jitsu legend Renzo Gracie’s guard in their middleweight bout.

With seconds left in a bout that was favoring Penn, sitting in side control after a trip takedown, the smaller Penn decided it was not enough to ride out position. With little time left meant little risk to be swept and reversed.

Penn would underhook the right leg of the planted Gracie. Controlling that leg meant Gracie would have less to defend with if Penn were to pass, then Penn would snake his right leg through the slot made by his arm and Gracie’s leg. Flexibility played a huge part in the pass as well as the vast arsenal of grappling technique that Penn enjoys.

As he passes, Renzo bucks but with that leg controlled it makes it easier for Penn to sit down and get his weight planted to control Renzo. He completes the pass into mount and the round ends soon after.

Sweeping to get to a top position is very under utilized. Antonio Rodrigo Nogueira would win fights sweeping from beneath his opponent including fights against Tim Sylvia and Randy Couture.

It isn’t easy but it is possible and it is where loads of Jiu-Jitsu players have found success against wrestlers using their leverage and weight distribution against them.

Carlos Eduardo Rocha found himself beneath a collegiate wrestling stud in Jake Ellenberger. Ellenberger entered the bout as hot as can be and everyone knew that while he had stellar wrestling, he also had raw power in his hands. Rocha knew the longer he stayed on bottom the less chance he had to win. He had to do something.

A powerhouse wrestler on top, controlling position. It must be the end right?

Carlos Eduardo Rocha, who is a very accomplished jiu-jitsu player, sees light in the darkness underneath an accomplished wrestler like Jake Ellenberger. Instead of allowing the stronger Ellenberger to hold position, Rocha attacks from a defensive position. Rocha uses the power in his hips through beautiful technique to lock in a Kimura from underneath to roll over Ellenberger and gain dominant top position.

Rocha also uses upper body strength to compliment his momentum and hip rotation in the sweep. Ellenberger, as a wrestler, may have gotten too comfortable on the ground and was thrown off his base and his wrestling talent was negated completely.

Ellenberger threatens ground-and-pound on Rocha from atop his back. One of the more dangerous positions to threaten is from atop the back of your opponent. It is very advantageous and when your opponent has his head in the mat it severely limits his options in terms of mounting any offense.

Rocha has already isolated the left arm of Ellenberger beneath him as Ellenberger strikes with his right free hand Rocha is busy latching on for a kimura from underneath. The submission would be borderline impossible to complete but using it as a sweep to gain top position is very effective.

Rocha rolls from beneath Ellenberger clutching the kimura on the isolated arm, with tremendous upper body strength he uses his momentum to manipulate the arm so that it forces Ellenberger to roll over, in a somersault. Rocha now has the arm isolated atop Ellenberger in a crazy scramble.

Chad Mendes has always been a fantastic prospect in the sport, with outstanding wrestling and stellar cardio he has amassed an undefeated record. His latest challenge was a Jiu-Jitsu ace, a grappling wizard in Rani Yahya.

During their chess-like match, which led to a unanimous decision for Mendes, a certain clip stood out to many watching.

Standing above the kicking Yahya, Mendes decided it wise to not jump into the guard of Yahya and instead jump completely over it. And not just jump over it, somersault over it. While the move is very risky and dangerous it can also be effective if used at the right time.

Mendes tucks his head and dives forward rolling his body. Yahya responds by attempting to get up and Mendes lands on the back of Yahya. So through the high risk move he went from an even 50/50 position to taking the back of a Black Belt. Back control as we discussed before is the most advantageous position right along side the mount.

That will be it for now Maniacs, we have seen top position more often than not win fights and it is hard to argue against it when the top fighter has more options to finish and win the fight.