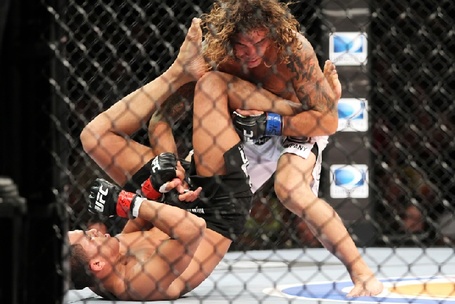 The debate is long and drawn out. Countless arguments have been made out for both sides. Is top position wrestling held in higher regard then active bottom fighting in the eyes of the judges? Is the current unified rules method of judging consistently favor the fighter on top?

But there is a reason for that: Staying on top of someone isn’t as easy as it sounds. You are not able to lay your body on someone and relax, rest and wait until the referee is raising your hand. Not while Brazilian jiu-jitsu continues to counter the efforts of wrestlers, anyway.

At The Ultimate Fighter (TUF) 13 Finale in June 2011, two top lightweight contenders collided in a highly anticipated match up. Grizzled veteran and long-time fringe contender Clay Guida would look to test his overwhelming top game against one of the youngest prospects in the entire sport, exciting and innovative Anthony Pettis.

What happened in their fight was a showcase of the smothering top game of Guida and the active bottom game of Pettis.

For a complete, detailed breakdown of their three-round chess match follow me after the jump:

Guida was coming off the most impressive run in his career, with three straight victories that all came via submission over Shannon Gugerty, Raphael Dos Anjos and Takanori Gomi. Surging his way to the top of the ladder, the UFC placed a young, thrilling WEC superstar in his way.

The last champion of the WEC’s lightweight division, Pettis would enter the cage with a four-fight win streak, including a "Fight of the Year" performance against Ben Henderson. Attempting to make a wave in the UFC, "Showtime" would need to pass his first test against the guy the promotion relies on to really put someone through the grinder.

The fight was a grappling duel.

Guida secured five of his attempted eight takedowns. He was able to get at least one takedown a round and would pass the guard of Pettis four times. Pettis, meanwhile, would offer his own grappling offense when he would reverse Guida and pass two times of his own, coming close on several submission attempts.

Let the .gifs do the talking.

Heading into the bout analysts and fans alike wondered how hesitant Pettis would be to let go of his kicks in fear of the takedown. That answer would come immediately in the first round. As Pettis attempted to set up his leg kick with a non-committed "1-2," Guida confidently ate the kick and latched right on it. He used that kick-catch to grab a high single leg and drive Pettis into the mat for the takedown.

Falling right into the full guard of Pettis, Guida immediately attempted to fight off the active hands of his opponent. Pettis began to work immediately as soon his back hit the mat. He grabbed control of the left wrist of Guida, which is very important and pivotal when fighting on the ground.

Wrist control eliminates the threat of ground and pound, controls and limits the posture of the top fighter and it sets up submissions. With proper control of that wrist and hip movement Pettis could possibly latch on an omoplata, arm bar or triangle choke. When Pettis tucked that wrist of Guida back that typically shows a triangle set up is forthcoming.

Guida postured high above Pettis, standing up over the legs and guard of his opponent. Staying from between Pettis’ legs was important to stay out of danger and allowed Guida to be more diligent as he picked his shots. By stacking his weight atop Pettis he pressured the hips, which are the most dangerous weapon when on your back.

On the second strike Pettis attempted to suck Guida back into his web. He rolled his hips over to the side using his legs and arms to attempt to get a grip and hold on Guida. He threatened initially with an arm bar when he set his legs high and isolated the single wrist of Guida. With a veteran mentality, Guida recognized and attempted to get his base atop Pettis. He even grabbed a collar tie to attempt to control Pettis.

Again Guida resorted back to standing over the guard of Pettis, stacking his legs back to land strikes as he hovered above. This time, however, he clutched on the feet of Pettis to defend from up-kicks or sweeps. When standing above someone with dynamic grappling like Pettis you always should feel weary of a rolling knee bar.

Guida lost one foot and the genius of Pettis and coach Duke Roufus come into play. One thing you never want to do is give your opponent air to breathe. The more room the more options. And Pettis used his free foot to plant it hard, shifting his body weight throwing a head kick right from his back.

Maybe not the most efficient strike in a fighter’s arsenal, but it forced Guida to backpedal and gave Pettis room to spring back to his feet where he has the clear advantage over Guida in the fight.

Hold on for this wild ride.

Pettis controled the right wrist of Guida and swiftly threw up his legs, attacking with a triangle choke. Guida is quick to defend, attempting to shake out of it. Guida extended his body through the legs, freeing his trapped arm and throwing some strikes to the head of Pettis. He snaked through the guard and grabbed another collar tie, clutching control of Pettis with both hands around his neck.

As soon as Pettis breaks the tie he began to shift his hips. He put his left foot on the hip of Guida, which he could use this to propel himself upward for an arm bar. Simultaneously, Guida attempted to pass into half guard. Pettis used this as his opportunity to pounce on the exposed limbs of Guida.

With the hand that is assisting Guida in passing, Pettis briefly isolated to attack with a triangle choke. Guida attempted to maneuver out of danger by passing to the side of the attacking leg in hopes to pop out into side control. Instead, Pettis began chain grappling moving from the triangle threat to an arm bar when he catches an arm in a scramble.

As Pettis attempted to fall back, Guida spun away from the arm bar, actually going right over the back of the attacking Pettis. Through the scramble Pettis stayed tight on the arm, attempting to extend it properly to put the pressure on the submission. As soon as they roll back upright, Pettis continued to fight for the arm and Guida attempted to tuck and roll to the side once again, protecting his arm from being completely extended.

The round ends and fans everywhere breathe for the first time in more than 30 seconds.

Guida is assumed to be ahead on the scorecards two rounds to none and there is only a minute plus for Pettis to end this fight to come back from the jaws of defeat. As Guida held on to a body lock along the fence, he attempted to secure yet another takedown. Using stellar balance, Pettis was able to reverse the throw and actually landed in prime position in side control of Guida.

Pettis fans have a beacon of hope. Pettis is a phenomenal top game fighter with power to finish fights and submission skills to really put Guida in danger.

Pettis would move into mount and would look to unload ground and pound forcing Guida to escape, he would give his back to Pettis and he would immediately look to secure the rear naked choke. He would be in a dominant position looking to secure the late round come from behind victory.

Guida had other plans, however, slipping right through the legs of Pettis and coming out from underneath to gain top control. He capitalized on Pettis being slightly too high on Guida’s back, which allowed Guida to shrug Pettis up enough to slide out the backdoor.

Guida would once again stack the legs and hips of Pettis as Pettis would once again isolate an arm with wrist control. Half a minute later the bell would ring and Guida’s hand would be raised with the unanimous decision victory.

This fight should serve as a lesson as to the reason you should work on your bottom game just as much as your top game. Both fighters had difficulties with the opposite styles.