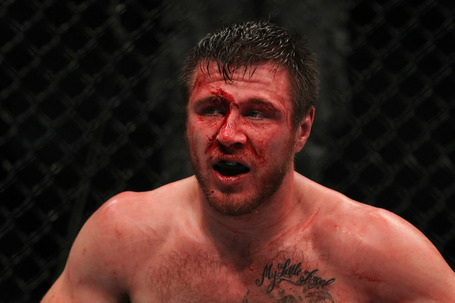 Ultimate Fighting Championship (UFC), despite its lameduck partnership with future ex-television partner Spike TV, will once again feature two bouts from the preliminary card prior to the start of the pay-per-view (PPV) event scheduled for this upcoming weekend (Sat., Aug. 27, 2011).

UFC 134 "Prelims," which will air at 8 p.m. ET on Spike TV, live from the HSBC Arena in Rio de Janeiro, Brazil, will feature a middleweight showdown between Rousimar Palhares vs. Dan Miller, as well as a lightweight match up between hard-hitting Spencer Fisher, taking on Brazilian jiu-jitsu specialist Thiago Tavares.

Let's take a closer look at the Spike TV "Prelims" planned for this weekend:

At 5’8," Brazilian Top Team’s Rousimar Palhares (12-3) is actually three inches shorter than main card participant Edson Barboza, who fights at 155 pounds. He makes up for this, however, by being roughly as thick as he is tall. Bristling with muscle and deceptive skill and quickness on the ground, the man known as "Tree Stump" has been wreaking havoc on the middleweight division, handing Dave Branch, Lucio Linhares and Ivan Salaverry their first and only submission losses. While poor decision-making resulted in a technical knockout loss to Nate Marquardt, Palhares is back on the warpath and has the local orthopedic surgeons drooling in anticipation of more vicious leglocks.

Dan Miller (13-5, 1 NC) entered the UFC with a single loss, a split-decision to fellow future signee Mike Massenzio, but it was his guillotine victory over Dave Phillips in the International Fight League (IFL) that put his name on the map. In one of the most cringe-worthy moments in the promotion’s brief lifetime, Miller sank the choke in so deeply that Phillips’s face was literally pressed into his chest by the time he passed out. His UFC career has hit a bit of a rough patch recently, having gone 2-4 in his last six appearances; however, Miller intends to use Palhares as a stepping-stone (considering his height, he’s a good choice) on his way back to the middleweight elite.

Supporting my allegations that Chute Boxe is cursed, fans were denied the chance to see what could have been the greatest leglock battle ever when ADCC veteran Alexandre "Cacareco" Ferreira made one too many excuses for not fighting Palhares and was cut from the UFC. Miller, therefore, took this fight on less than two months notice.

Against someone with the skill and strength of Palhares, that’s simply not enough time. Not nearly enough.

Palhares’s hyper-aggressive pursuit of submissions has gotten him in bad spots before, but even against black belts like Linhares and Branch, he’s been able to get out of them quickly and get right back to tearing major ligaments. Miller, while a skilled grappler in his own right, hasn’t demonstrated the sort of acumen necessary to capitalize on Rousimar’s recklessness. And he doesn’t have nearly the stand up skills to sprawl-and-brawl his way to victory.

Miller is an accomplished wrestler, but Palhares’s wrestling has improved greatly since his cavalcade of failed takedowns against Dan Henderson, as evidenced by his beautiful shot against Marquardt. Even if Miller lands on top, Palhares has proven himself incredibly dangerous off his back, as shown when he caught Branch in an armbar during a takedown scramble before he had even hit the ground.

I like Miller quite a bit and admire his willingness to face dangerous opponents on short notice, but Palhares has decimated people with skills roughly equivalent to Miller in the past. Rousimar’s stand up is still a major question mark, but it won’t be a factor, as Palhares will become the first man to ever finish the less-accomplished Miller brother with his signature heel hook.

Prediction: Palhares via first round submission

Spencer Fisher (24-7) had his first UFC bout in 2005, which is around the same time Thiago Tavares (15-4-1) had competed a grand total of three times in mixed martial arts (MMA). A bonus magnet with some of the division’s tightest stand up, Fisher has fallen on hard times, losing three of his last four to the likes of Dennis Siver and The Ultimate Fighter (TUF) alums Joe Stevenson and Ross Pearson. At the ripe old age of 35 in a division so deep you can’t throw a rock without hitting a legitimate title contender, Fisher needs to make a statement and prove he still belongs with the big boys at 155.

And Tavares’s face would make an excellent canvas.

Tavares’s recent affairs haven’t exactly been sunshine, rainbows and lollipops, either. Three trips to Versus ago, he was dominating WEC import Shane Roller for the first six minutes of their bout before a one-two caught him clean on the button and sent his major brain functions somewhere into deep space. The submissions expert, at 5-4-1 in his UFC career, is on the hunt for a big win to re-establish himself as a force to be reckoned with at 155.

And he knows Saturday may be his last chance.

As I said before when discussing Yves Jabouin, I’m always glad when pure strikers succeed and also think that, despite my love for the stumpy gunslinger, Fisher outstruck Siver, but "The King’s" time as a contender may be over. Despite his undeniable striking acumen, he’s finished only one opponent in the past four years. And that was by submission. While Thiago’s recent loss was rather ugly, I’m of the opinion that Roller punches harder than he’s given credit for and that it wasn't a sign of a shaky chin on the Brazilian's part.

Tavares’s striking looked very crisp against Roller, and while I don’t doubt that Fisher will have the advantage standing, I don’t think that advantage is significant enough to keep Tavares off of him. Thiago’s wrestling should be sufficient to get Fisher down, and while he’s not the best finisher, he’s more than capable of stifling any offense Fisher tries to unleash. If Fisher displayed more consistent stopping power, I might give him the nod, but Tavares has a more varied skillset and not much to dissuade him from utilizing it.

Less than a week to go, fellow Maniacs. Life is good.

Remember that MMAmania.com will provide LIVE blow-by-blow, round-by-round coverage of UFC 134 below, beginning with the preliminary card bouts on Facebook and Spike TV at around 6:30 p.m. ET and running right on through the PPV broadcast at 9 p.m. ET.