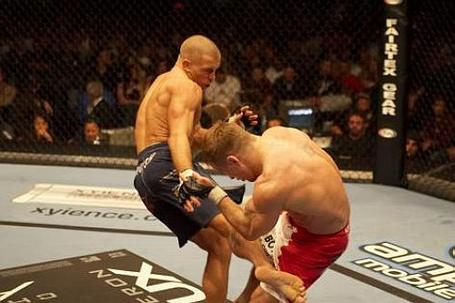 When attempting to become a well rounded mixed martial artist, you will often focus on wrestling skills. Being able to dictate where the fight goes, almost automatically you will begin learning how to grapple and learn submissions to complement that wrestling arsenal.

But what exactly did we learn from Mark Coleman’s loss to kickboxer Maurice Smith way back when at UFC 14? And how about when the "Godfather of Ground and Pound" would be knocked out by kickboxer Pete Williams at UFC 17?

We learned that an Olympic and NCAA Division I wrestler could be beaten if his wrestling could be negated.

That mold was developed and perfected throughout the years. Sprawl-n-brawl fighters like Mirko Filipovic and Chuck Liddell would make entire careers out of stopping the takedown to utilize their devastating striking abilities. Grapplers and wrestlers alike now had to fear being stifled and overwhelmed thanks to their lack of striking acumen.

Fast forward to today and fighters need to incorporate all aspects of the martial arts, whether it be amateur wrestling or catch wrestling, jiu-jitsu or judo, boxing or Muay Thai. If they did not follow this model they would be in danger of being exposed as one dimensional and be defeated by much more well rounded athletes.

While first timers training their stand up skills will focus on their "1-2’s" there is one particular weapon more fighters should utilize. To find out what it is, follow me after the jump.

A lot of talk goes into discussing a fighter’s reach, whether it is the insanely long limbs of Jon Jones or the short, compact arms of Sean Sherk, the idea of having advantages in reach can be very important.

But how much of that discussion goes toward the reach of a fighter’s legs?

After all, the proper usage of the legs far exceeds the lengths of any jab. Of course I am talking of the jab of the legs, the leg kick. The extension of your own leg to kick the leg of your opponent, visibly one of the most basic strikes you can possibly throw.

Depending on your stance and also the stance of your opponent a leg kick can either attack the inside of your opponent’s thigh or the outer thigh, typically on the lead leg of your opponent. As for the person throwing the kick, you can use your lead leg, which gives you more speed and less commitment, or the rear leg, which delivers more power and far more commitment.

When you have an opponent who relies a lot on his wrestling, he will often carry a low stance with his lead leg sitting significantly in front of him, more so than an upright fighter who stands more erect. When facing wrestlers a kickboxer can often feast on the lead leg if they feel their takedown defense is up to par.

When Donald Cerrone met up with jiu-jitsu ace Vagner Rocha at UFC 131 in June of this year many people anticipated the two hitting the mats. Cerrone had other plans entirely, as he would land 86 significant strikes through three rounds while Rocha would desperately attempt to take the fight to the mat.

Through those three rounds, Cerrone would deliver a heavy dosage of vicious leg kicks that did plenty of damage to his opponent. Rocha, on many occasions, would be hurt so badly he would flail to the ground hoping he could drag Cerrone down. His desperation would not work.

In the clip above you see Cerrone throwing four separate leg kicks. The first and third kicks are all outside leg kicks, which see Cerrone attacking the lead left leg of Rocha. He is torquing his rear power leg in a whipping motion landing above the knee just below the middle of the thigh. If you have never experienced a leg kick, I don’t suggest you start now.

In the second kick Cerrone uses his same rear leg to attack the inside thigh of Rocha. One of the biggest advantages leg kicks can offer you in a fight is to make your opponent very uncomfortable putting weight on the leg you’ve been attacking. Bruising often occurs quickly and even so much as walking around the cage is painful and unpleasant.

Imagine what that does to your opponent if he is a grappler or wrestler. If they are not able to simply walk comfortably could you imagine planting your legs in hope for some explosion in the takedown? It is a striker’s most dangerous tool if used diligently and powerfully.

I think we all saw what happened when Jose Aldo took Urijah Faber's legs out from under him. Leg kicks do far more then take away a fighters legs, though. They also set up head kicks.

In his fight with Kenny Florian, Diego Nunes, despite taking the loss, showed how effective and dangerous an inside leg kick could be. The inside leg kick is when you attack the lead leg of your opponent on the inside of his thigh. This happens to be one of the easiest places to slip up with an accidental groin strike.

As you see, Forian’s right leg is leading as he stalks Nunes. That is the leg targeted most often, as kicking the rear leg leaves you more vulnerable defensively and takes a little more effort with less guarantee of effectiveness.

While Nunes is backpedaling in a subtle manner, he stops and sets his feet. While planted, Nunes swivels his hips thrusting his rear right leg forward in a slicing motion, landing right beneath Florian's knee. Part of the reason it lands so low is due to Florian checking/defending the leg kick. By picking up your leg, it helps absorb the strike in comparison to leaving it planted as it is kicked.

Nunes kicks Florian to his knee in a moment of unbalance and forces Florian to scurry up and retreat, resetting himself and stopping his stalking of Nunes.

Florian is once again stalking Nunes, walking him down while diligently looking for his opening. Not even a minute earlier Nunes caught the inside lead leg of Florian causing him to back pedal.

This is where that earlier strike gets paid off.

In the same manner as before, Nunes stops his retreating footwork and plants down to unload a kick. This time Florian is aware a kick may be headed his way, however, he assumes the kick will be attacking his leg.

He drops his posture as if to catch the kick and in turn, fails to protect his head. Nunes, instead of attacking the leg, goes upstairs for a head kick, landing flush on Florian's face and stumbling him backwards to once again retreat and reset.

By threatening Florian with the leg kick that threw him off balance, Nunes set up the head kick perfectly. Having Florian defend low enabled a high strike to land cleanly. Just one way a leg kick can affect a fight.

Another way leg kicks can really impact the fight is using it to capitalize on openings through combinations. The simplest "1-2" punch combination can be turned lethal if capped off with a leg kick.

Tyson Griffin is well known for his leg kicks. He has been one of the more active followers in how dangerous they can be. As you see in the clip Manny Gamburyan felt several of those strikes.

In the first set of kicks, Tyson uses a double jab and cross feint that has little commitment behind it. The reason for that is the payoff is the leg kick. If the punches land that would be great but since they are thrown with so little power, the feints just push Manny backwards to open up the legs for a kick.

When a fighter is back pedaling the power and danger of a counter strike straight down the pipe is lessened therefore making the full power leg kick less risky. If Tyson wants to throw all his power into the strike he will often leave an opening for a straight right from his opponent. By throwing the feints he forces Manny to back up taking that option away.

In all the clips shown, Tyson works with feints and footwork to push Manny backwards. This will also decrease the reach that Manny would normally have. Back pedaling forces posture to change, so when he wings a punch it will be at a different range then normal.

All this from a simple leg kick.

Finally, the man I consider to be the most effective at using leg kicks, Jose Aldo.

I do not think I have seen someone use them as viciously and with as much fervor. He starts combinations with leg kicks and ends with them. He has hurt countless opponents with them and has taken advantage of such with his killer instinct and ability to finish fights.

In this combination against Mark Hominick, the featherweight champion unleashes a thunderous body shot with his left hand. He sets up that body shot with a feint using the left hand to make it appear he will go high and instead cocks back and goes to the mid-section.

From there, Aldo gets his feet planted as he rushes in and lets go with his right leg. Notice the swivel in his hips and the whipping motion his leg makes. He lands directly above the knee throwing Hominick off balance and in pain, almost dropping him to the mat.

The strike itself is extremely difficult while pushing forward, it is not easy to get balanced enough to plant both legs and throw a leg kick. It just shows the dynamic abilities of the young champion.

Leg kicks rarely finish fights but they often change the course of them. Whether it is taking the legs out from under a wrestler or taking the lead leg to plant on from a striker, when utilized correctly, they're a game changer.

What are your two cents, Maniacs? Feel the same way I do about leg kicks?