UFC 135 results and LIVE fight coverage for 'Jones vs Rampage' on Sept. 24 in Denver

Share All sharing options for: UFC 135 results and LIVE fight coverage for 'Jones vs Rampage' on Sept. 24 in Denver 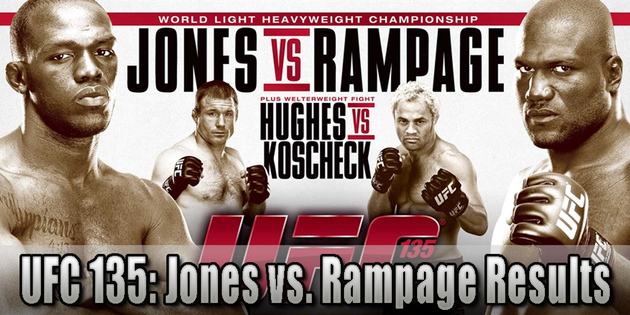 Ultimate Fighting Championship (UFC) is set to pull the trigger on its latest pay-per-view (PPV) extravaganza TONIGHT (Sept. 24, 2011) from the Pepsi Center in Denver, Colorado.

UFC 135: "Jones vs. Rampage" will feature the first title defense of light heavyweight champion Jon Jones, as he puts his 205-pound strap on the line against former titleholder Quinton Jackson. Also booked for "The Mile High City" is a welterweight showdown that pits longtime veteran and fading legend Matt Hughes opposite late replacement, Josh Koscheck.

MMAmania.com will provide LIVE blow-by-blow, round-by-round coverage of UFC 135 below, beginning with the preliminary card bouts on Facebook and Spike TV at around 6:30 p.m. ET and running right on through the PPV broadcast at 9 p.m. ET.

Many of our readers check-in before, during and after the televised action to share their thoughts on all the exciting action. Therefore, feel free to leave a comment (or 1345) before you leave and chat with all the other Maniacs during the show -- it always turns out to be a great discussion.

Keep in mind that we will also be the spot for the latest news, recaps and post-fight analysis after "Jones vs. Rampage."

Round four: Left hook from Jones. Jones slips on a missed kick. Rampage ducks under and ties things up. Rampage needs to let his hands go. Jones with a take down now and he lands a good elbow with Rampage sitting up with his back against the cage. Knee to the body from Jones. Jones takes the back and now has in a DEEp rear naked choke and Rampage taps out!!! Thats it and Jones again looks simply unbeatable.

Round three: Uppercut from Hunt. Rothwell can barely walk. HUGE uppercut and left hook from Hunt. Hunt sprawls out of a take down and lands a BIG left that wobbles Rothwell. Hunt with a combo. Rothwell falls to the mat and Hunt is on top in full guard now. Hunt is landing some good body shots and punches. Hammer fists from Hunt. Ref stands them up. Rothwell with a left and uppercut from Hunt. Rothwell shoots and misses and now Hunt on top of the back on Rothwell. Hunt throwing some punches. Now their back to the fet. HUGE right from Hunt. Uppercut from Hunt as Rothwell shoots. Rothwell just almost fainted in the middle of the fight. Hunt on top now and throwing punches from half guard. Big hammer fists from Hunt. Good punches from Hunt. Somehow the ref stands them up when Hunt was in side control!? Never seen that EVER. Good uppercut and left hook from Hunt. Head kick from Hunt. These guys are both gassed. Rothwell is like a zombie. Rothwell looking for a north south choke as Hunt went for the take down. Rothwell spins to the back now. Hunt is over on his back now and the bell rings. 10-9 Hunt.

Round three: Left from Broughton. Big right from Broughton and Browne looks gassed. Now their tied up against the cage and Broughton is landing knees to the thigh. Easy take down from Browne and then a big right hand. Half guard for Broughton. Nothing going on but laying and praying. Full mount for Browne. Nothing doing. Crowd is bored and so is this play by play announcer. Full guard for Broughton. Broughton now going for a kimura! Browne moves into side control and gets out and is lucky cause it was DEEP. Now their back up for the bell. Bad fight, but a win none the less for Browne. 10-9 Browne.

Round one: Cautious feeling out process out of the gate. Restless crowd booing. Assuncao goes southpaw and looks for a leg kick. Nothing doing. Still a stalemate. Assuncao rushes in and gets hit with a good right to the head by Yagin. Assuncao holding hands dangerously low. Assuncao continuously switching stances. Clowning a little bit, seemingly trying to tempt Yagin to lose his composure. Assuncao throws another leg kick and misses. Assuncao gets takedown and has him against the cage. Yagin tries to butterfly and work free from underneath to no avail. Assuncao patiently working from top and pulls Yagin away from cage to get more room to work. Yagin active from the bottom with his legs. Assuncao is starting to drop some heavy punches from the top. Yagin escapes and it's back on the feet. Just over a minute to go in the round. Assuncao still keeping hands very low. Yagin misses with a left punch and gets taken down again. Assuncao working inside Yagin's guard and trying to pass. Yagin controlling the head. Final seconds tick off. Should be a 10-9 round for Assuncao.

Round two: Both fighters still cautious in the stand-up exchanges. Neither really engaging. Crowd continues to voice their displeasure. Assuncao rushes in going for takedown, can't get it but has Yagin's back. The action is pressed up against the cage now. Yagin pushes him off and it's back to the center. Yagin eats a jab. Yagin lands a nice front kick to the body. Assuncao clips Yagin with a nice left hook, then a good inside leg kick. Yagin looks very tentative. Assuncao continues to keep his hands down and taunt a bit. Assuncao goes for takedown and gets caught in a deep guillotine. He somehow manages to slip out and is now in half-guard. Assuncao working to get side control. Thirty seconds left. Yagin escapes and it's back to standing position. Assuncao lands a good leg kick and backs off instantly. Should be another 10-9 round for Assuncao.

Round three: Yagin rushes in and gets takedown, tries for guillotine but Assuncao out immediately. Assuncao slips away and gets back up, landing a good left strike on the way up. Assuncao goes for a front kick to mid-section and Yagin counters with a right punch. Yagin jumps to guard and is cranking on Assuncao's neck. Very deep, but again, the elusive Assuncao is able to escape. In the process, Yagin gives up position and is under Assuncao again. Assuncao in side guard and working elbows. Yagin looks frustrated and possibly ready to quit. Assuncao is landing a lot of elbows, mixed in with some hammerfists. Two minutes to go. Assuncao is continuing to work the ground-and-pound, all the while trying to work his leg free so he can have side control. If his right leg gets free, this will probably be over. Yagin is getting hit with hard shots, still unable to get out from under Assuncao. Just under a minute to go. Yagin looks exhausted and appears to just be waiting for the clock to expire, hoping to not get finished. Dominant round for Assuncao. I'd call it 10-8 in his favor.

Round one: Wasting no time, both fighters charge the center and begin exchanging. The fight goes to the cage. Mizugaki clinches up. Both fighters land some knees. Mizugaki charges in, lands a decent leg kick and punch combo then clinches against cage again. Escuvedo working inside knees. Mizugaki has underhooks and looks to be working for takedown, very methodical. He gets the takedown  and is in Cole's guard. Doesn't appear to like it and gets right back up. Clinching again. Escuvedo jumps to guard and is looking to get standing triangle. Escuvedo pulls Mizugaki to mat and is working his guard. Now, back on the feet. Mizugaki lands a couple good leg kicks. Escuvedo looking to jump to guard again, slips off. Escuvedo goes for flying knee. Escuvedo definitely more active of the two. Escuvedo lands two good elbows in a row, answered by a nice body shot (punch) by Mizugaki. Escuvedo throws head kick attempt and misses. One minute left. Great round so far. Mizugaki runs in with combo of punches and lands a few. Tough round to score. I'd call it a 10-10 draw, but I'm crazy like that. I change my mind. 10-9 Mizugaki.

Final result: Takeya Mizugaki via TKO (punches) at 4:30 of round two

Round one: Romero goes for early takedown and is unsuccesful. Te Huna backs up and hits Romero with a shot that has him staggered. He never looked to recover and takes several more shots. Romero goes for a single leg takedown and Te Huna hits him with several punches that leave him knocked out on the mat.

Final result: James Te Huna via KO (punches) at 0:47 of round one