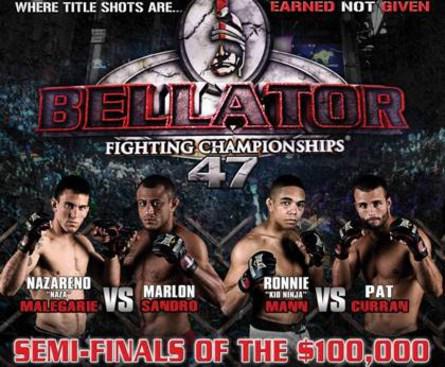 Ratings are in for the latest offering from the world's number three promotion and the news is good.

Bellator 47 brought in an average of 277,000 viewers for the July 23 MTV2 broadcasted event, according to numbers released by the cable television network today.

The broadcast peaked with 386,000 viewers and did well enough to earn a spot as the second most watched event in the organization's history since the move to MTV2, only behind Bellator 44.

In addition, an immediate replay of the event garnered another 261,000 viewers. All-in-all, not a bad night for the promotion making its debut in the Great White North.

Joining him will be recently promotional newcomer and top ranked 145-pound fighter Marlon Sandro, who went the distance with Nazareno Malegarie in a thrilling affair that saw Sandro take it on all three judges scorecards.

In other action, Chris Horodecki was dominant in a win over Chris Saunders and Neil Grove treated fight fans to a one hell of a heavyweight throwdown, stopping Zak Jensen in three minutes of hard-hitting action.

For complete Bellator 47 results and blow-by-blow of all the main card action click here and here.