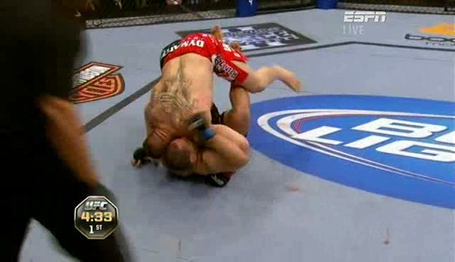 However, in a sport like mixed martial arts (MMA) that continues to evolve at a rapid pace, the competitors are forced to constantly improve their skills and attributes so that they are not passed up and left behind. Plenty of instances have already occurred in MMA with the younger generation fighters focusing on several disciplines and moving past the older fighters who became satisfied focusing on one single discipline.

But the evolution doesn't just exist for disciplines in a general sense, small techniques and innovative moves have become the new trend for younger fighters to capitalize on. Who can forget Anthony Pettis winning a major title off of a single kick that swung the momentum in his favor and earning him a judge's decision? Or how many of us have forgotten Chang Sung Jung twisting on Leonard Garcia’s spine with "The Twister," leaving us all with our mouths gaping open?

In this sport, it is important to use creativity and imagination, as I pointed out in my post about innovative submissions previously, as it creates a much more tough time for an opponent to defend if he doesn't know how to.

So where do we go from here?

So much debate has been sparked whenever a wrestler smothers their opponent to a unanimous decision win as was the case in fights such as Anthony Johnson vs. Dan Hardy and Jake Shields vs. Martin Kampmann. Fighters begin to earn reputations as "lay’n’pray" fighters and are titled as "boring."

One of the many reasons why, is due to the fact that ground positions for bottom fighters have become very stagnant. Open guard or closed guard, for example, which is typically the normal positions you end up when the fight hits the ground.

So when it becomes that easy to prepare for, eventually all top fighters will get used to countering offense from the bottom fighter. Sweeping your opponent is very difficult, even if set up right, as now it becomes exponentially more difficult if you know what to look for.

That is why channeling from traditional guards seems to be utilized a little more these days. As was the case when Brock Lesnar fought Cain Velasquez.

Cain Velasquez has 265-pounds of Division I All-American Wrestler on top of him and he seems to escape pretty easily considering the situation. A lot of people have said if Brock Lesnar is on top of you, it would be difficult to escape from underneath.

Cain must not have got that memo. With Brock on top, Cain used the butterfly guard to attack and escape.

The butterfly hooks or "guard" is designed to focus on lifting the top guy or using your feet and legs to take away their base allowing you to attack or escape. The guard itself requires both of the legs of your opponent being hooked with your ankles in between the legs against the inside thigh. With over/under hooks with the arms you have the upper body and lower body controlled. With this control you are able to perform powerful sweeps using your legs for leverage especially when elevating your opponent.

In the above clip, Cain uses them to create distance between himself and Brock which leaves him an opportunity to slide back and scramble to his feet. While containing Brock’s wrists, Cain explodes with his legs to push Lesnar back as he scoots away and up to his feet. While Brock is still latched on to him, Cain is now out of danger from being ground and pounded or controlled.

While being an accomplished jiu-jitsu blue belt, Cain could have reverted back to the traditional open guard to perhaps sweep the massive Lesnar or the closed guard to control and set up submissions. Instead he went for a position Lesnar may not have been completely comfortable or familiar with and got himself into a position much more advantageous.

When you talk of a technical and crafty jiu-jitsu guard we should never forget about Damien Maia. When Maia squared off with Ed Herman, we knew immediately where Maia would want the fight to take place. And when the fight hit the mat it was hard to argue the fight wasn't at that point already decided.

With so much going on in this set up you have to notice the subtleties in the chain grappling of Maia. After Herman escapes a submission, Maia recovers guard and digs in a butterfly hook with his right leg. Often a person on top in the butterfly guard feels a lot more mobile then he should, Herman attempts to pass that half-butterfly guard and makes the mistake of reaching a hand back to pass as he raises his left leg to come up and over Maia’s butterfly hook.

As soon as the arm goes back, Maia uses that butterfly hook to zip up over the shoulder of Herman, locking in the triangle choke and putting his black belt to the test as he attempts to (successfully) finish the fight.

Maia very well could have set this submission up from the traditional guard however, when passing a regular guard the technique and fundamentals differ then from passing other types of guards. Maia uses the hook of his right leg to suck Herman right into the submission.

In a wild fight that saw striking and grappling back and forth from both Demetrious Johnson and Miguel Torres, the latter showed perfectly what the butterfly guard can be used for.

After a takedown by Johnson that puts Torres on his back, he immediately begins to work to recover his guard. Instead of looking for a closed guard, he snakes in his left leg for one butterfly hook and clasps an overhook with his left arm. As soon as he is able to snake in the right leg into a butterfly hook he explodes up with that leg and pulls back and under with the arm he has an overhook on. The combination of those movements allows Miguel to roll Johnson over and achieve a top position.

As Torres pushes his right leg up at the thigh area of Johnson he elevates him, throwing off his base entirely and uses the overhook on the arm to basically drag Johnson towards the mat on the left side of Miguel. In a full on rolling motion, Torres is able to finish the roll right on top.

This was the first round; something similar happened in round three.

Again, while fighting for position on the ground, Torres latches his butterfly guard and immediately without hesitation elevates Johnson up while again clutching his overhook on the right arm of Johnson. He duplicates his sweep from the first round and enjoys the same success as well.

What makes the butterfly guard so effective is the fact that your legs are often so much stronger then your arms and when using your legs you can lift up so much more weight. By elevating the body of your opponent you create so much distance and then are given so many opportunities to attack or escape.

When you use you legs in that manner it gives you an advantage your arms simply cannot do. How many times has someone lifted an entire opponent’s body with their arms?

Adding diversity to your arsenal will allow you to have more opportunities to use effectively in a fight and will force your opponents to work harder, train harder and focus on more aspects of the fight. Not only will an opponent have to train inside a closed guard for Miguel Torres, they will have to train in open guard and butterfly, this will prevent them from fully becoming comfortable inside one position when they know how diverse the opponent is.

In this sport, you can't afford not to keep learning, enhancing and incorporating any and everything you can.